A review of Blitzkrieg and Jitterbugs by Elizabeth Hillman Waterston 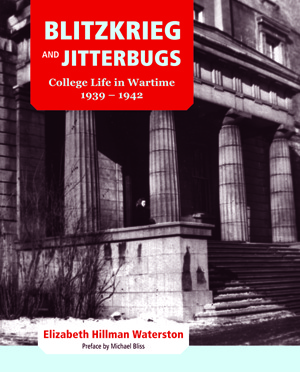 Elizabeth Hillman Waterston was preparing for her first semester at McGill University in 1939 when Britain declared war on Germany. Blitzkrieg and Jitterbugs is the account of her experience as a student in the shadow of that distant war. Waterston tells her story in lively, present-tense journal entries, drawing on school yearbooks, articles from the McGill Daily, photographs, and her own memories to create what she calls a “fictionalized memoir.”

Waterston launched herself energetically into university life, attending dances and guest lectures as well as first-year classes. She also joined the McGill Daily team, reporting on campus events ranging from debating competitions to debutante balls. In the midst of essay writing, she notes, exhilarated, “I’m not weary! I’m studying my head off, but I’m having a great time, war or no war!”

Signs of the war were everywhere, however. Men starting their first year of university were required to undergo a medical examination by the Canadian Officer Training Corps and “urged to consider adding COTC drill to their schedules.” Male students dropped out to join the army in increasing numbers, and many professors also left as they were called on to contribute to the war effort. And McGill Daily headlines – examples of which are interspersed throughout the book – provided a sombre reminder of current events: “British reveal atrocities in Nazi concentration camps”; “Thirty sectors of London bombed”; “Canada declares war on Japan.”

Waterston recalls the pressure that the Daily faced from the administration to not rock the boat. Reprimands and warnings were delivered to the newspaper’s staff, reminding them, for example, that “it is not appropriate for the McGill Daily to run stories about cutting classes or other high jinks of the kind acceptable in peacetime. The general public will be watching university students very carefully in the next few months for assurance of campus support of the war effort.”

Critical voices still managed to be heard on campus, however. Waterston was impressed by student activist Madeleine Parent who argued that management was using patriotism as an excuse to keep workers’ wages low and to prevent the formation of unions. She was also inspired by feminist Thérèse Casgrain’s fight to obtain the vote for women in Quebec – finally achieved in 1940.

Barriers for women were beginning to break down in the early 1940s, but women in academia still faced prejudice, as Waterston discovered. There were few female professors, and female students were excluded from certain departments, such as mathematics. Women could study law, but weren’t admitted to the Montreal Bar until 1942. She regularly encountered male professors’ fixed perceptions of women’s abilities. For instance, her philosophy professor informed her that “logical thought comes more naturally to male students.” Less discussed in the book is the war’s role in making new jobs available to women, though Waterston experienced this in a small way in her summer job in 1941 when she worked for the Canadian Pacific Railway as a clerk, a position normally occupied by men. More analysis of trends and changes such as these – whether within the text or in an introduction – would have added an interesting dimension to this book and provided welcome context.

As a war history Blitzkrieg and Jitterbugs is somewhat abbreviated, ending in the spring of 1942 when Waterston transferred to the University of Toronto because so many professors in her faculty had been “gobbled by the war effort.” However, as a memoir of one person’s wartime experience it is an engaging read, providing a snapshot of life in Englishspeaking Montreal in the 1940s, and vividly evoking the disconnect between that world and the conflict unfolding in Europe. mRb