A review of Body Music by Julie Maroh

Julie Maroh, known for her lyrical, evocative graphic novels, including Blue is the Warmest Colour and Skandalon, delves into the quotidian details of love in this newly translated work. She seeks to present the ins and outs of romance and sex as experienced by those whose stories are less often told. From her introduction: “I want this book to be an homage to all the loving beings who go against what is expected of them, sometimes risking their lives in the process.”

Maroh sets Body Music in an easily recognizable Montreal, and uses Moving Day (as July 1st is known in Montreal) to thrust her many narratives – twenty-one in total into motion. As the stories pile up, so do the days of the year, until we come back around to July 1st. Maroh checks many boxes here: characters deal with terminal illness, accessibility issues, gay hook-up apps, texting anxiety, negotiations of sex and gender, affairs, creepy dudes, polyamory, loneliness, co-habitation, and loss. It’s a difficult feat to weave all these micro-narratives together into a coherent and resonant whole. Maroh takes the challenge, with varied success. 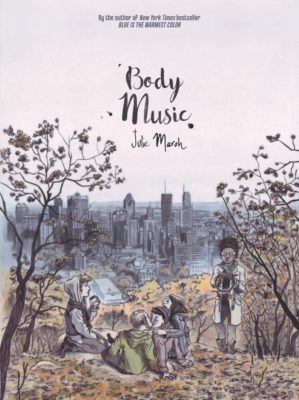 At its best, Body Music captivates – in the way of Strolling or High Maintenance, two of my favourite web series – through snippets of varied lives, and we get a broader sense of a city and the preoccupations of a subset of its denizens. Maroh’s layered grey tones expertly capture the architecture and mood of certain parts of Montreal (mainly the Plateau). One can pick out a familiar corner, a well-trodden park path, that café everyone goes to. The urban landscape becomes an indispensable part of every story being told.

There is a maturity to Maroh’s work, especially in the way she juxtaposes text and images. She draws movement with dexterity – characters race in and out of frames, down a snowy incline, around the dance floor at the club, into the throes of passion. Bits of dialogue are superimposed on images that initially seem unrelated, but then expand into a grander vision. In “After the Fight,” an angry cyclist processes a recent blow-up with a loved one, pedalling furiously through the park, until his bike flings him dramatically into a pile of leaves. In “Polyamorous Love and Friendship,” a group argues about polyamory versus monogamy; Maroh represents them in several historical scenes, including Jacques-Louis David’s The Tennis Court Oath and a Roman gladiator spectacle. She portrays various sexual encounters with a combination of sensuality and frankness – her fluid lines are really showcased in these scenes.

However, with all these passing moments, and very few character recurrences, it can be a challenge to find Body Music’s emotional core. It is something of a whirlwind – we accompany characters often just for a handful of frames before being whisked away to another situation entirely. There are some questionable choices, too, that highlight the book’s limitations: the only (apparent) trans character is presented solely through the confused perspective of a cis character; Inuit spirits are evoked in a way I’m not sure is appropriate from a non-Inuit artist; two queer racialized women hook up after a book launch, and the only topics we see them discuss are their sexuality and their ethnicities. It is no longer enough to simply represent difference via a bricolage of diversity: the question of whose experiences are being centred is still relevant here, if there is to be a real disruption of the mainstream concept of love. This is not to say that Maroh isn’t successful with some of her vignettes – however, as a whole, Body Music leaves this reader wondering what could have been achieved if she had focused on fewer stories, allowing for more layering and complexity in each. mRb