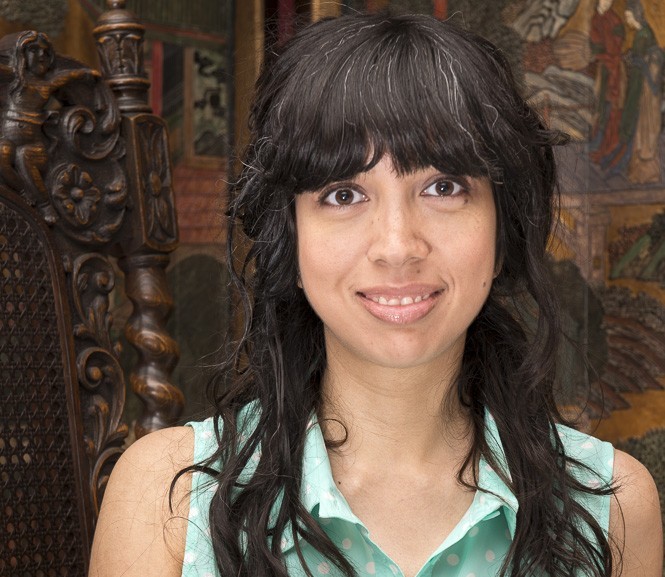 Sister: she is your soulmate and companion, your sidekick and protector. She is your mirror, the person with whom you share “sweet, crazy conversations full of half sentences, daydreams and misunderstandings, more thrilling than understanding could ever be,” to quote Toni Morrison.

In her enveloping, heartfelt debut novel, Bone and Bread, Saleema Nawaz penetrates deeply into the sibling bond. Beena and Sadhana are so close they barely know where one leaves off and the other begins. When the story opens, we learn that Sadhana, the younger of the pair, is dead at age thirty-two, and “that she had spent half of her life starving herself, or trying not to.”

When you lose a loved one, her absence can haunt as painfully as a phantom limb. The survivor returns to the past, seeking understanding, a chance to heal through the solace – even the pain – of memory. 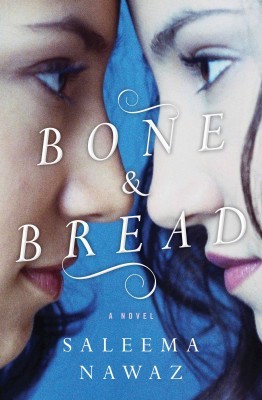 I met up with Nawaz at Café Art Java near McGill during her lunch break as administrative coordinator for the Department of Philosophy. The thirty-four-year-old author is striking, tall, and lithe in a coral trench coat belted at the waist, long planes of glossy black hair, and short bangs framing large, dark eyes. With the appearance of Bone and Bread, she secures her place as one of our most promising writers. Her story “My Three Girls” won the 2008 Journey Prize, the same year that her collection of stories Mother Superior appeared, a finalist for the McAuslan First Book Prize from the Quebec Writers’ Federation. Bone and Bread is receiving acclaim and a storm of publicity.

“How does it feel to be a literary cover girl?” I ask. She laughs, “It’s fun!” No false modesty here, thankfully. Wise and accomplished, Bone and Bread centres on loss, grief, and healing. Beena and Sadhana lose their father as girls, then their mother as teens. Later, Sadhana dies, seemingly from complications related to anorexia. “Ghosts ought to have been my speciality,” Beena tells us. “There were enough dearly departed in my family to haunt a dozen Gothic novels.”

“Family relationships intrigue me,” Nawaz says, sipping on a tall glass of milk and nibbling on a croissant, while mute cooking shows air on largescreen TVs. “You don’t get to choose your family. Blood knots are more complicated than other relationships.”

Papa appears for just a few pages, but Nawaz brings him to life. Born in the Punjab, he chooses a passage from Guru Granth Sahib to give his daughters insight into each day, and has a smile for his girls that “travelled up to his eyebrows and all the way into his orange turban.” When he dies of a heart attack in the bagel shop below their apartment, readers feel the loss along with his bereft daughters and widow.

Readers spend more time with Mama, a flame-haired “universalist kind of spirit” who has her own lucky star and believes in animal spirit guides. Born in Galway, Ireland, she follows her heart, “choosing to be free, choosing to always be choosing.”

When the sisters plan a roast chicken dinner, the surprise ends in tragedy. Though their mother taught them to chant mantras and spin wool, neither girl possesses practical skills. Mama’s death is particularly traumatic because her daughters feel responsible.

Nawaz sets up a rhythm between past and present, layering the avalanche of losses in the sisters’ childhood and teenage years. Images from their richly detailed past, as the girls grow up above the bagel shop, breathing in the fumes from the wood-burning ovens, are among the best in the novel. The sisters share a birthday and a bedroom; their menstrual cycles are in sync. As teens, they camp out on the balcony and spy on the bagel boys having their smoke breaks. Beena loses her virginity with one and becomes pregnant at sixteen, but the father doesn’t stick around, and Beena raises her son, Quinn, on her own.

Nawaz is also an only child, raised by a single mom, who was originally from Nova Scotia. She is named for her Indian father, Saleem, who left the family when she was two. “I don’t remember him,” she says, and has no desire to contact him. “What could he give me? What could I want from him?”

In Bone and Bread, Quinn actively seeks out the father who abandoned him. Nawaz says her fictional character is “open to imaginative possibility. Quinn is an evidence-gatherer.”

So are Beena and Sadhana, though the sisters are complementary in most other ways. Beena is round and ungainly, bookish, caught between trying to save her sister and carve out a life of her own. Sadhana is thin and fierce, fragile and sharp-tongued. Her starvation and compulsions – desperate attempts to control a world that has stricken her and her sister with too many losses – make perfect, albeit self-destructive sense.

The yin and yang of the sisters, the dialectic of the novel’s title (which echoes born and bred) might have been schematic in lesser hands. But Nawaz makes it work. It’s a powerful moment when both sisters stop menstruating at the same time: Beena because she is pregnant with new life, Sadhana because she is starving herself to death. Even more potent are their simultaneous hospitalizations: Beena to give birth, Sadhana to prevent death.

Beena tells the story. Her voice is strong and delicate, poetically resonant. She possesses a literary sensibility, insight, and depth beyond her years. The language is dense, layered, blooming with images and raw visceral power; the miracle is that it rarely feels strained. Most contemporary writers are squeamish about sentimentality, but Nawaz does not shy away from raw emotion.

Caring for a mentally ill sister is unrelenting; as a result, Beena’s voice can be recursive. This is a deeply interior novel and some readers may feel the need to come up for air. At times I craved the refreshment of the quotidian: Beena doing her job as an editor and part-time paralegal, the clip of a workmanlike sentence. I longed to see the hustle and flow of life, to hear the texture of other voices, one in particular: Sadhana’s.

I ask Nawaz why she chose a single, first-person point-of-view. “I just started writing in Beena’s voice,” she says, “and it stuck.” She drafted a section from Quinn’s perspective, “but it didn’t work for the novel as a whole.”

Sadhana ultimately remains mysterious, inscrutable. Though we learn about her: her rage at injustice, her fierce bond with Quinn whom she calls “our child,” her gifts as dancer and actress, we are outside, looking in. Beena wonders if constantly watching her sister “was not making it harder for me to see her…You needed fresh eyes to see clearly.” Seeing Sadhana’s world through her own eyes might have made this book even more powerful.

Yet, Nawaz makes readers feel the loneliness of trying to help a mentally ill loved one: stopped fast – again and again – by the hard, intractable mystery of the Other. Here, she succeeds. Have your tissue box handy.

As a child growing up in Ottawa, Nawaz was a voracious reader and writer. She learned to read at three and always knew she wanted to write. She describes her process as slow and meticulous, building sentence by sentence. “I would like to write faster,” she confesses, “to find the story sooner.”

Bone and Bread took her five years to complete. Her biggest challenge? “The ending.” To avoid a spoiler, I’ll only say that the narrative contains a mystery and a few unexpected twists and turns.

It’s been a month since a fire destroyed the apartment Nawaz shared with her husband, Derek Webster, founder of Maisonneuve, and his eleven-year-old daughter. Fortunately, no one was hurt and the family looks forward to moving into a home they are renovating in Mile End, the neighbourhood of Bone and Bread. Nawaz very much enjoys being an “other mother” to her stepdaughter who is currently angling for a sibling. More new roots are a distinct possibility.

“What are you working on next?” I ask, an hour of writerly talk passing all too quickly. “I have about 100 pages of a novel,” she says, “and a big chunk of interconnected stories. How do you decide what to attack?” Given the strength of her first two books, it’s clear that the talented author will figure it out. Her readers will gladly wait. mRb