A review of Borderline by Marie-Sissi Labrèche

Borderline is the first book by Montreal Francophone writer Marie-Sissi Labrèche. Released in 2000, the work won a cult following and went on to be adapted into a film of the same name, whose script won the 2009 Genie Award for Best Adapted Screenplay. Borderline is a semi-autobiographical narrative that follows a young woman named Sissi as she navigates Montreal in the late nineties, engaging in risky behaviours, struggling with mental illness, and reflecting on her traumatic past.

Borderline is an honest and original work, and Labrèche takes many risks with her writing. It’s not every day that one encounters a book that contains realistic depictions of the harsh yet mundane reality of childhood trauma, a protagonist who is frequently cruel and unlikeable, or a female character that’s allowed to have pain that’s more jarring than poetic. To integrate all three of these aspects in one work is a testament to Labrèche’s literary bravery, and her commitment to writing in ways that contradict established conventions.

One might take the book’s previous popularity in Quebec as proof that Labrèche succeeded in her aims with Borderline. Unfortunately, the work does not hold up today. The prose, for instance, erects its own barriers to enjoyable reading. The author’s writing has much in common with the literary tradition of stream-of-consciousness. Even twenty years ago it would have read somewhat awkwardly, but today the style is especially grating, and it’s difficult to jump over the rough edges of the prose in order to become immersed in the narrative. Whether this fault lies with the text, the translation process, or a combination of the two, the final product reads like a shoddy Quebecois transplant of a Jean Rhys novel – without any of the poetry that makes reading Rhys worthwhile. 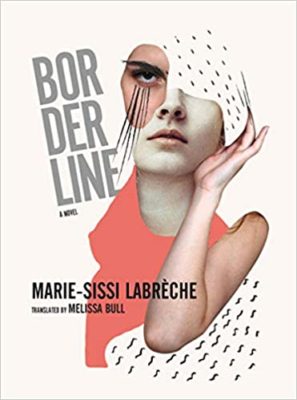 Merits might be given to the text for its unflinching depiction of a character living with Borderline Personality Disorder; a mental health condition that’s oft misrepresented and severely misunderstood. Literary depictions of mental illness in general tend to lean towards the sentimental, especially when the afflicted characters are women. These characters are frequently romanticized in ways that are actively harmful towards those who live with these conditions. Labrèche turns away from these representations and attempts to depict living with mental illness in a way that’s more realistic. Unfortunately, this approach of realism leans too much to the other side of representation.

Sissi’s inner turmoil is represented in the text as a sort of pure hatefulness towards the world and everyone in it. There’s potential for a protagonist’s cruel cynicism to be a lens from which to survey and critique the world, and many writers have used their narrator’s angst or depression to interact with the injustices of human society. But Sissi’s bared-teeth attitude to the world has none of the scathing punk-rock sensibilities that could add merit to the narrative. Instead, the targets of her anger are those already most marginalized by the imbalances of power in the world. She speaks at length about how disgusting she finds fat people: “It disgusted me especially because I was with Eric. Eric is super gross, super fat, super misshapen, and super short.” She raves about how her grandmother’s racism, without speaking against it at all: “my grandmother would never take us there. She’s convinced Chinese people cook rats, cats, and pigeons, and they mix them into their bacteria egg rolls to make us sick. She’s convinced Chinese people are massacring us through our stomachs, wreaking havoc on us, and that’s how they’re going to take over the world.” She panics about how lesbian relationships might be fundamentally narcissistic – a viewpoint that’s been used to justify homophobia time and time again: “her body is like mine. I can’t get over it…am I touching myself? Am I in a full-on narcissistic crisis?”

There’s nothing radical or illuminating about a narrative grounded in cruelty that’s directed at the already disempowered. Perhaps a book stuffed with hateful characters could be entertaining – writers like Ottessa Moshfegh, for example, have succeeded in writing magnetizing narratives centred around immoral, nearly sadistic characters. But Borderline doesn’t even manage to titillate readers with the cruelty of its characters; it’s the banal, disenfranchised anger of everyday life. Without any reason for the reader to be invested in the protagonist’s journey, by the end one gives up caring about whether she manages to get her life together or not. One only wishes that Sissi will be able to break through the suffocating confines of this boring novel and escape to a more interesting place.mRb

Nour Abi-Nakhoul is a Montreal-based writer whose work has appeared in The Cut, Xtra, Hazlitt, Bandcamp, and more. Find her on Twitter @nourmal_woman.