Bottomfeeder: How to Eat Ethically in a World of Vanishing Seafood

A review of Bottomfeeder: How To Eat Ethically In A World Of Vanishing Seafood by Taras Grescoe 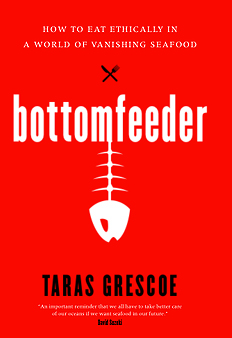 Bottomfeeder: How To Eat Ethically In A World Of Vanishing Seafood
Taras Grescoe

A few weeks ago I visited a Mile End fishmonger. On beds of gleaming ice flanking the squid I was tempted to purchase, lay several fresh and shiny victims of unsustainable fisheries: small, ugly monkfish, brilliant red snapper, and meaty Chilean sea bass. The cheery cleanliness of the shop belied its environmental shortsightedness, a sad reality undoubtedly echoed throughout the country.

I chatted with the manager about how he decides what to buy. As long as the demand is there, he said, he will do his best to supply it, to the extent of legality. He has to satisfy his customers and make a living. In other words, his eye is on the bottom line, not on the future. So I left without buying the relatively plentiful squid.

As more people turn from feedlot to ocean for their protein, the race to hook, net, or drag up the last Napoleon wrasse or king crab steps up. Facilitated by high-tech devices and super-efficient equipment, greed rules the high seas. The price we pay for this extravagance is the loss of the last wild food most of us will ever eat. Unless we soon change our ways, says Taras Grescoe, the seas will teem with nothing but jellyfish. Bottomfeeder is a guide to a modern extinction crisis that implicates us all.

More than a decade ago, the end of the East Coast cod fishery grabbed the headlines. But since then, less dramatic but equally tragic and avoidable species collapses barely make the news, if only due to their extended – and illusory – availability. Bluefin tuna (staple of expensive sushi), most shark species, and other top-of-the-food-chain predators are rapidly disappearing. Grescoe calls for informed eating, immediately-at the bottom, instead of the top, trophic level.

Fish farming is another preferred “solution,” but one with serious drawbacks. Years ago, Atlantic salmon was an expensive seasonal treat. Now almost extinct in the wild, it’s an ubiquitous, flavourless, potentially hazardous feature of every restaurant menu, thanks to massive farming operations around the world. Farming’s effects on human health and the environment (sea lice, anyone?) almost cancel out any benefits. And harvesting caged carnivores doesn’t reduce the pressure on wild fish one iota, because they must eat other fish. According to Grescoe, this kind of protein production is “akin to nourishing tigers and lions with beef and pork, and then butchering the great cats to make ground round.”

Grescoe writes lucidly even while dredging up a litany of depressing facts. (An ethical eating guide provides additional clarity.) And he’s not afraid to speak his mind. As a result, some readers might find that his comments veer into political incorrectness. He describes some countries’ cuisines as “cruel,” and implies that blindly honouring “tradition” is as big a threat to marine biodiversity as high-tech machinery and lack of political will. But safer writing would have made for a weaker book.

Fans of Grescoe’s previous food-and-travel book, The Devil’s Picnic, will find much to gasp at in Bottomfeeder. As an avid seafood lover and intrepid reporter, he samples everything from live shrimp in China to whale meat in Japan, with more startling fare in between. After eating whale, he has one of many crises of conscience, wondering if “hell has a special media room for the overly curious writer.”

Let’s hope heaven claims Grescoe first for having written this sober yet entertaining and timely book. Read it, eat more ethically, and help secure a spot for yourself. mRb