Giggle at his Gaffes

A review of Forever Truffle by Fanny Britt

The standout book of the season is sibling spinoff Forever Truffle. Fanny Britt and Isabelle Arsenault broke into the young adult lit scene with the award-winning Louis Undercover, which tells the story of a father’s struggle with alcoholism and the toll his addiction takes on his estranged partner and their two sons, Louis and Truffle. Now in English thanks to Susan Ouriou’s translation, Forever Truffle brings the rock-loving, heart-on-his-sleeve Truffle into full colour. 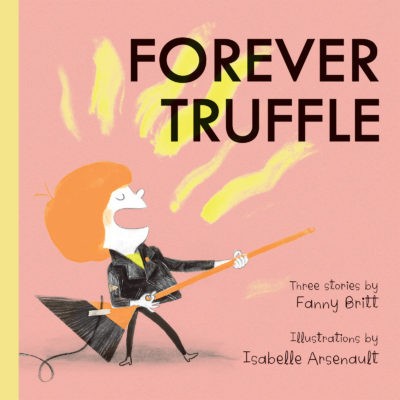 For his birthday, Truffle asks for a biker jacket, which he adorns with a collection of vintage buttons. He vows to never take it off – and for the duration of the book he wears it, even to his great-gran’s funeral. Without a doubt, this kid is cool. In three heartwarming stories, Truffle launches his first air-guitar band, the Man-Eating Plants, with his equally awesome friends Flo and Riad, navigates the first blush of love with Nina Simone’s namesake, and faces the heartbreak of losing a pet. Truffle doesn’t censor himself, and young readers and adults alike will giggle at his gaffes, share his big dreams of rock stardom in Montreal, and likely identify with the larger questions he asks about life (“What is a figure of speech?” “How do I get my heart to talk?”).

As in Louis Undercover, the themes in Forever Truffle are a little more mature. My six-year-old didn’t yet connect with Truffle’s coming of age. I suggest buying it for the reader in that nebulous age group straddling innocence and teen awakening. I believe they will fall in love forever with the spunky Truffle.mRb

Meaghan Thurston is a Montreal-based arts and science writer, co-editor of With the World to Choose From: Seven Decades of the Beatty Lecture at McGill University, and mother to two budding readers.