A Case for Clarity

A review of The Hours by Bruce Meyer

“Don’t make jokes to me about life and death,” says Martha, one of Bruce Meyer’s characters in his latest collection of short stories, The Hours: Stories from a Pandemic. Her words reveal an undercurrent of severity that runs throughout the text. There is a formal simplicity to Meyer’s writing that, like Martha, is stoic – yielding to the quietest emotions of the characters. It is a work of serious, inquisitive fiction that is at once ambitious for portraying the impact of pandemics and noticeably modest. In spare, beautiful prose, Meyer touches on solemnity.

Though inexplicable, cosmic moments arise, Meyer’s collection makes a case for realism. As images from the pandemic seep into contemporary art, Meyer pays close attention to how, to when, and to what extent artists include details and circumstances from the past two years. Where others have argued – and hoped – that contemporary art, especially fiction, should be subtle in its portrayal of our new societal conditions, Meyer’s work seems to shirk off any fears of this type of criticism. Instead, Meyer offers six brief glimpses into worlds that, just a few years ago, would have classified The Hours as a work of speculative fiction.

His stories are laden with familiar images, ones any contemporary reader can relate to, even if only by way of the news. A virus-stricken cruise ship sails from port to port, seeking entry; a marriage falters when one partner, an ER nurse, confronts the initial outbreak; an elderly couple tries to reconcile the world they knew, and loved, with the new one taking its place; the quaintness of a remote island is recast as a global flu spreads and the islanders’ system of transportation fractures. 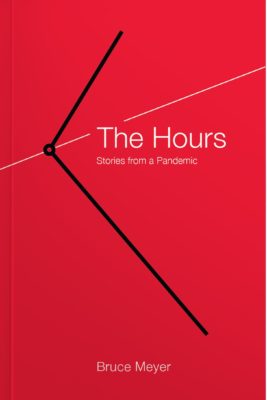 The Hours
Stories from a Pandemic
Bruce Meyer

Unassuming and exploratory, The Hours gestures to the way in which reality, during pandemics and epidemics alike, can quickly lose its shape, becoming strange and oneiric. Meyer does this by creating atmospheres in which the characters are estranged from their surroundings. Everywhere in the collection, the characters’ emotions move slowly – in and out of memory – as the unfamiliar world enshrouding them speeds ahead, often deeper into disaster. Nowhere is this more pronounced than in the penultimate story, “The Dolphin,” which follows a pneumonia-stricken university student south, to the Gulf, and deep into a hallucinatory version of his reality.

In the titular story, a wealthy woman, Mrs. Henderson, and her gardener Angelo work to maintain a diverse rose garden during the 1911 Eastern North America heat wave. Her collection of roses burns, day in and day out, as the world outside the walls of her home descends into chaos and widespread death. Though their attempt is futile – there were thousands of deaths during that eleven-day heat wave, and some roses can hardly survive one scalding afternoon – the two characters grow into their shared perseverance, finding a renewed appreciation for the disappearing flowers, and a deeper understanding of the other, however short-lived. It is a concise, harrowing story, indicative of Meyer’s deep appreciation of metaphor and the compression inherent to the short story form.

The title of the collection references medieval books of hours, which were decadently embossed devotional books containing Christian prayers, songs, and psalms. They were personal items, often custom-assembled for their owner. Beyond being emblems of ritual, timekeeping, and faith, they represent a physical manifestation of interiority and the daily movements of a mind. Meyer’s work, in this collection, dwells in the intricacies of those movements, especially as an individual reckons with life and death.

These are stories from a writer who has immersed himself in the history of recent pandemics, mining historical and personal experiences for muted, shining, and often inconsequential images. The Hours makes no great claims about our contemporary moment, our pandemic. Instead, it simply reminds the reader that the fabric of shared experience is woven from a prismatic, expansive assortment of threads.mRb