A review of Canada And Israel: Building Apartheid by Yves Engler 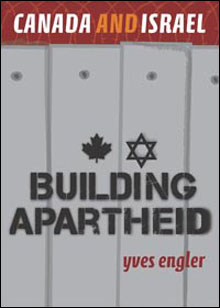 Countries, like people, can go a long way on their reputations. But according to Yves Engler, Canada’s reputation as peacekeeper, honest broker, friend to the disenfranchised, and so on, is hardly deserved.

Having written such books as Canada in Haiti and The Black Book of Canadian Foreign Policy, Engler, former Concordia Student Union president and all-round activist, is creating a niche for himself by dissecting the unknown, nefarious, or hypocritical deeds that define Canada’s foreign policy. Want to tour the world with a Canadian flag on your backpack? Hold that thought.

With Canada and Israel: Building Apartheid, Engler wades into the murky waters of the Israel-Palestine conflict. Almost every major event, milestone, and sector is explored for its Canadian angle. Keeping his editorial voice to a minimum and eschewing rhetoric and moral one-upmanship, Engler relies almost exclusively on documents in the public domain, archived media reports, and an extensive bibliography.

According to these documents, Canadians played a significant role from the beginning: among other things, leading a brigade in the new Israeli army (Ben Dunkelman), designing the partition plan (Justice Ivan C. Rand), and being credited for negotiating the final vote in the United Nations (Lester B. Pearson). Meanwhile, Elizabeth MacCallum, the only Middle East expert in the Department of Foreign Affairs at the time, was often purposefully left out of meetings and her protestations went ignored: “At the time of partition MacCallum scribbled a note and passed it to Pearson saying the Middle East was now in for ‘forty years’ of war due to the lack of consultation with the Arab countries. She underestimated the duration of the conflict.”

Unlike its British or American counterparts, Canada seems to always have the benefit of the dark. Engler’s book demonstrates that working in the background allows Canada to carry out a foreign policy without it actually having to be policy. Israel is, after all, the only other country besides the United States with whom Canada shares a “border management and security agreement.” Engler reveals the breadth of Canada’s relationship with Israel to be staggering: over 140 Canadian weapons makers export arms directly to Israel; Canada consistently blocks the International Atomic Energy Agency and the Nuclear Non-Proliferation Treaty from demanding accountability from Israel’s nuclear weapons industry; in 1997, Israel became Canada’s fourth free trade partner, after the U.S., Mexico and Chile; after the March and December 2008 incursions into Gaza, which claimed over 1,200 lives, Canada was the only country to oppose a un resolution accusing Israel of war crimes.

Engler goes refreshingly beyond the knee-jerk “Jewish lobby” theories as to why Canada is so supportive and intransigent, and explores some interesting avenues: Canada’s historical willingness to accept the mistreatment of indigenous peoples; the desire to have a “western outpost” in the Middle East; a belief in Israel rooted in a Christian literalist reading of the bible; the need to be aligned with an “Empire” (whether British or American or Israeli) and all that it entails. In 1948 Elizabeth MacCallum said Ottawa supported partition because “we didn’t give a hoot about democracy.”

Belying the author’s activist bent, Canada and Israel: Building Apartheid is a neat little book, something you want to mark up and tuck into your back pocket. But the haphazardness and errors in the footnotes and bibliography don’t help it graduate to serious scholarship. Engler should know better: given the contentiousness of the topic, it doesn’t take many factual errors or sloppy sourcing to decimate an argument.

Engler’s conclusion, however, that Canadians must educate themselves about their own country’s policies, couldn’t come at a better time. Harper’s government is easily the most fundamentalist and least transparent administration we’ve ever had. Just a few days of reading newspaper headlines confirms what we still have a hard time hearing: Canada’s reputation is in tatters. mRb