Bound to Our Past

A review of Canada's Forgotten Slaves by Marcel Trudel

During much of the nineteenth and twentieth centuries, the phenomenon of slavery in New France was virtually absent from history books. François-Xavier Garneau, the most influential French- Canadian historian of the nineteenth century, did briefly address its existence, but he falsely implied that the British bore the brunt of the responsibility for slavery in Canada and that the Catholic Church and French government had consistently opposed the institution.

Garneau’s views on slavery were challenged by the historian Marcel Trudel in his classic 1960 work, L’Esclavage au Canada français. The book is being released for the first time in English under the title Canada’s Forgotten Slaves (the excellent translation by George Tombs is based on an updated French edition of the original work.) 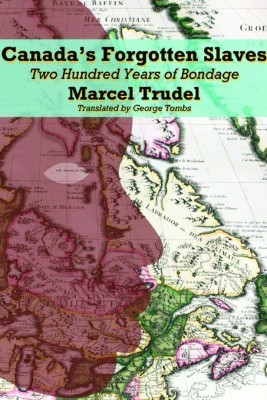 The result of meticulous archival research, Canada’s Forgotten Slaves demonstrates that Europeans held slaves in the area now covered by Quebec from at least as early as 1629. Slavery became increasingly common starting in the late 1600s and endured for about a half century after the 1760 Conquest. The exact date of its end remains obscure, but the institution gradually sputtered out in the early 1800s as a result of the anti-slavery movement.

Before the 1790s, slavery raised few moral concerns on the part of either French or English Canadians. Slave owners included senior government and Church officials, merchants, voyageurs, butchers, bakers, tavern keepers, local priests, and nuns. The majority of slave owners were of French rather than of British origin. Even after the Conquest, slaves were somewhat more likely to be owned by French speakers.

Slavery in this part of the world was less widespread than in much of the Americas (Trudel was able to identify the existence of about 4,200 slaves in New France and British-colonized Quebec). Unlike in the American South, slavery here was largely an urban phenomenon. It never played a central role in the economy and seems to have been practiced mainly as a form of conspicuous consumption on the part of slave owners. Only a handful of individuals are recorded as possessing more than twenty slaves, and no one owned over fifty. About two- thirds of the slaves in Canada were Amerindian, the rest being black.

Even by the standards of the time, slaves in Canada had brief life expectancies: on average, they died shortly before their twentieth birthdays. This shocking statistic is explained in part by the large percentage of Amerindian slaves who often fell prey to European diseases within a few years of their captivity. In other respects, the institution of slavery in Canada seems to have been somewhat less harsh than elsewhere on the continent. For example, slaves in New France had many of the rights of free persons when brought before the courts, and slaves convicted of crimes do not appear to have been punished more severely than non-slaves.

Marcel Trudel died in 2011 at the age of ninety-three after publishing over forty books. One of Quebec’s foremost historians, he annoyed some of his peers by refusing to write in the service of nationalist or romantic agendas. Trudel regarded slavery as a great evil, but in exploring its history in this part of the world, he presented Quebec in neither a flattering nor an excessively dim light.

Canada’s Forgotten Slaves is a scholarly and even-handed work, yet it is surprisingly readable and contains many memorable anecdotes. To this day, few people know anything about the history of slavery in Canada be- yond the existence of the Underground Railroad. Trudel’s book is an important corrective to this widespread ignorance and its English translation is long overdue. mRb