What’s in a Name

Canada’s Place Names & How to Change Them

Lauren Beck’s new book, Canada’s Place Names & How to Change Them, is as much about Canada’s past and present as it is about the country’s future. It’s a road map with places in time, metaphorical mileage markers, and directional signs. Once you go down this road, it’s difficult to stop.

For instance, a single fly-in community on the coast of Hudson’s Bay has four official place names: Whapmagoostui (Cree); and Kuujjuaraapik (Inuit); Great Whale River (English); and Poste de la Baleine (French). Cree and Inuit named the place for the beluga both peoples hunted. The different names each people gave the territory also defined a boundary between Cree and Inuit peoples. The English arrived in the 1500s to set up trading posts. They translated these Indigenous place names into “Great Whale.” Quebec renamed the same place “Le Grande Baleine” and later “Poste de la Baleine” during the Quiet Revolution of the 1960s. 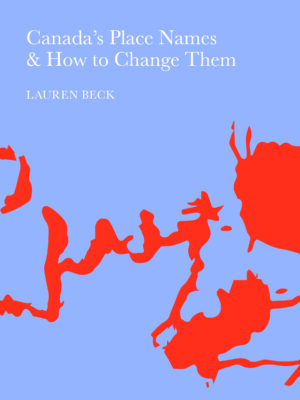 Canada’s Place Names & How to Change Them
Lauren Beck

Indigenous peoples usually named places for the food or other useful resources there, for ceremonies, or for significant geographic features that set boundaries or aided navigation. Sometimes colonizers adopted existing Indigenous place names. Most often, Beck explains, “with the Americas, these men activated a naming enterprise never before seen in Europe, and they reached for familiar sources of inspiration in order to populate terra nullius with names.”

In other words, they brought familiar place names, memories of home, and stamped their own imprint on the land. As Beck writes, “the language in which a place name was written often pointed to which nation’s representative performed the name or claimed occupation.”

Even today, names such as Argenteuil, Lourdes, Montpellier, but also Buckingham and Mayo evoke images of France, England, and even Ireland. They reflect each nation’s presence and contributions to Quebec and Canadian identities.

Beck’s chapter on “Gender and Place Names” made me aware of my own ignorance on the subject. She describes an early “landscape of [her] identity” as masculine, surrounded by place names, symbols, and sites that recognized “the actions and lives of white men” with few exceptions. This led her to conclude that naming places is also an exercise of power and authority. She writes, “masculine toponymy dominates the Americas in part because the place namers were men who valued the activities and accomplishments of their peers and cultural icons in ways that link toponyms to identity and violence.”

This can be a concern for anyone considering changing a place name, Beck writes, “because these names are viewed as historical and traditional,” and therefore deemed heritage and resistant to change. Beck suggests there are better ways to place names; as she writes, “The subject certainly warrants asking our communities about place emblems and whether they should be modernized to better reflect Canadians’ values and objectives today.”

Let’s face it, some place names should be changed. Shouldn’t naming places take into account cultural aspirations or shifts in society’s values? Consider a place name that includes a slur or insult, or named after a person, most likely a man, later exposed as an advocate of genocide and with the power to make it happen. Someone like Sir John A. Macdonald and those Indigenous residential schools..

In 2017, then-mayor Denis Coderre decided to change a street named after a British colonial general, Jeffery Amherst, who ordered smallpox-infected blankets be given to Indigenous tribes. Coderre stated that he didn’t want Montreal associated with “someone who wanted to exterminate Indigenous peoples.” In 2018, mayor Valérie Plante invited representatives from Kanehsatà:ke and Kahnawake to suggest a new street name. They agreed on “Atateken.” Hilda Nicholas, director of the Kanehsata:ke Language and Cultural Centre, explained that Atateken means “brotherhood, a group of people or nations sharing commonalities like values and beliefs.”

Beck might agree with this process and its result. But change rarely pleases everyone.

Taionrén:hote Dan David is a recovering journalist, aspiring writer, and habitual windmill tilter. He is based in Kanehsatå:ke, a Kanienke:haka (Mohawk) territory near Oka.