Lovers in a Dangerous Time

Norman Nawrocki’s first novel, CAZZAROLA! Anarchy, Romani, Love, Italy is a wild and bumpy ride through 130 years of Italian history as it follows four generations of Discordias, a fictional family of Italian anarchists. They have many stories to tell, and these unfold in a non-linear fashion, often squeezed through the lens of political struggles. 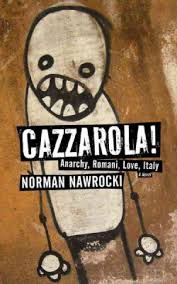 In keeping with his political inclinations, Nawrocki, the author of several books of poetry and short stories, moves us through time in an anarchical way and the effect can be dizzying. One minute we’re in present-day Rome immersed in the star-crossed love story of a young Italian musician and a beautiful and talented Romani violinist; one page later, Great-grandfather is telling us about his birth during a rock slide in Abruzzo in the year 1880. Although some of the characters and their stories reappear, others merely vanish into the ether of this epic tale.

Cinka Dinicu and Antonio Discordia are at the heart of this fractured novel. As it begins, we learn that Cinka, several months pregnant with Antonio’s child, has disappeared. She had arrived in Italy with her mother, younger sister, and brother on a bus filled with Romani looking for a better, safer life. They had come to fulfil her father’s deathbed wish that the family leave Romania for “the new land of opportunity.” Cinka also thought Italy would be “the land that would allow us to realize our dreams.” However, she quickly learns that the Romani are just as despised in Italy as they were back in Romania.

At a young age, Cinka was betrothed to a boy back in her Romanian village, as is the custom among Romani, and, unbeknownst to her, he is on his way to claim his bride. Meanwhile, Cinka is caught in the day-to-day struggle to survive. As her family’s sole provider, she is grateful when Antonio gives her studio work with his band. In no time, however, she is head-over-heels in love with the young Italian.

It is a Romeo and Juliet kind of love story: ill-fated. Being in love is something of a state of anarchy, two people creating a world unto themselves; it is only when the pressures of the outside world come to bear – in this case the full force of fascist politics – that reality takes hold.

Woven into this love story is a complicated narrative that traces the history of the anarchist movement in Italy and the rising tide of hatred against immigrants and refuge-seekers, most violently and particularly against the zingari. There is a great deal of passion but not always a clean line of narrative in Nawrocki’s work. It is human nature to try to make order out of anarchy (a term he defines as “the collective movement for freedom of the individuals”), and this is the task Nawrocki sets for the reader as he leaps from one brief scene to another, employing a vast cast of characters and feeding us historical vignettes about the rise of fascism and the struggle of the working class in Italy.

“The most frightening thing is that nothing has changed [in Italy since Mussolini],” says Nawrocki. “We’re back in that institutionalized xenophobia.” Although some news of these attacks on Romani and other immigrants has made it into North-American media, it has been so scant as to cause barely a ripple. While in Italy, Nawrocki took notice of TV and newspaper headlines about the plight of the Roma. After contacting a human rights group, he joined some fifty people as part of an official European Parliament delegation visiting a Roma camp. What he encountered there is authentically woven into the novel.

What immediately struck him were the desperate circumstances under which the Romani live. For the most part, they are unable to find much work. Children are forced out onto the streets to earn money to feed their families, which leads to lower education levels, and so it goes – a no-win situation.

In the camp, Nawrocki asked the Roma what he could do to help and their answer was, “Tell our story.”

The first year after he started writing the novel, Nawrocki turned some of this material into a theatre piece, also called CAZZAROLA (which loosely translates as ‘Oh, fuck’). “One day, I performed the scene about the burning down of a shack in the camp. The next morning, there was a story in The Gazette about how neo-Nazis had used Molotov cocktails to destroy the Roma camp in Napoli.”

After this incident, Nawrocki went back to Italy and visited other camps. When the book was completed, Nawrocki toured it across Canada, collecting stories from Roma living here. “I think the novel is more relevant today and also, more relevant to us here in Canada. My cross-Canada tour was an eye-opener. It opened the door for other people to tell me their stories.

“Five years ago,” he says, “Canada was not deporting Roma. Suddenly Jason Kenney [Minister of Citizenship and Immigration (2008–2013)] decided that Hungary was now safe and began deporting everyone.” The Canadian government, says Nawrocki, is ignoring the startling and swift rise of Hungary’s Jobbik nationalist (and anti-Roma) party.

Norman Nawrocki is a man of many talents. Aside from his poetry and short stories, he is an acclaimed cabaret artist, sex educator, actor, and musician. As a welcome companion to the novel, Nawrocki Nawrocki & Amici (friends)  have recorded “original & traditional music, songs & words, either inspired by or related to the novel.”

Ultimately, the splintered nature of CAZZAROLA! is chaotic and sometimes repetitive in the message it hammers home too stubbornly, but what comes of the chaos is a piercing howl against the rise of fascism and xenophobia everywhere.

Gina Roitman is a writer, editor, and author of the acclaimed short story collection Tell Me a Story, Tell Me the Truth, and the co-producer, co-writer of the award-winning documentary My Mother, the Nazi Midwife and Me.