A review of Charging Ahead! by Jean-Benoît Nadeau and Julie Barlow

When stormy weather, a zealous beaver, or a blown transformer knocks out power in our rural hamlet, my husband and I survive the blackouts quite comfortably. Nonetheless, when the electricity is restored, we are only too happy to put away our gas-fuelled generator, Coleman stove, and kerosene lamps, to stop stoking our wood-burning stove and hauling water from a nearby river.

The importance of electricity in contemporary life can hardly be overestimated, especially in Quebec, which consumes more of it than any other Canadian province. But we Quebecers tend to take Hydro-Québec, our public utility, for granted – until it fails us, and then we complain. In Charging Ahead! Hydro-Québec and the Future of Electricity, Jean-Benoît Nadeau and Julie Barlow give us reason to show greater appreciation for a company that normally keeps everything from computers to refrigerators humming and does so at a low cost for consumers. As they point out, it’s an “incredibly complex task” to generate, transmit, and distribute electricity in a system consisting of “352 turbines and 63 generating stations, about a billion switches, power outlets, light bulbs and appliances of some 4.3 million customers, and enough power lines to wrap around the planet six and a half times.” 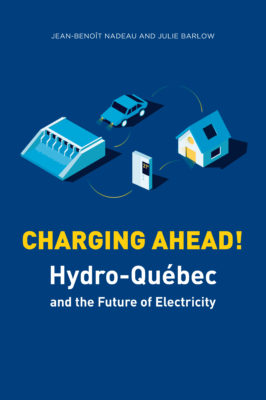 Charging Ahead!
Hydro-Québec and the Future of Electricity
Jean-Benoît Nadeau and Julie Barlow
Translated by Julie Barlow

Nadeau and Barlow deftly combine firsthand observation, interview excerpts, and archival data in their text and provide accompanying diagrams, graphs, maps, and photos. They acknowledge Hydro-Québec’s support during their research – the government-owned corporation gave them remarkable access to staff and facilities. They even witnessed the inner workings of the System Control Centre, an “isolated, windowless bunker,” at a top-secret Montreal location.

The co-authors frequently use colourful analogies to enable the layperson to understand their scientific subject matter more easily. They compare visiting a Hydro-Québec research centre, for instance, to visiting “the set of a James Bond film, waiting for the eccentric Q to pop out” with his latest gadget. The gadgets Nadeau and Barlow saw were “prototypes of robots – flying, underwater, and rolling – that Hydro-Québec is developing to inspect its networks” and “batteries the size of a tractor trailer.”

As I became more familiar with electrical terms, I found Charging Ahead! increasingly engaging. I learned a lot about Hydro-Québec’s ascendancy – through the development of very high-voltage transmission lines and the monumental but controversial James Bay Project – to the status of the largest hydroelectric energy producer in North America and one of the top five hydroelectric energy producers in the world. I also learned a lot about the company’s diversification into solar and wind power and its experimentation with geothermal and osmotic energy.

Nadeau and Barlow have quite rightly given attention to the impact of Hydro-Québec hydroelectric projects on the environment and on Indigenous Quebecers. “To build dams,” they write, “Quebec flooded thousands of hectares of land and bogs, transformed rivers into lakes, razed whole forests, dis- turbed habitats and destabilized entire communities.” Those communities were largely Cree and Innu.

The co-authors predict that “HydroQuébec will continue planning hydroelectric dams,” despite their “higher initial price tag than solar or wind farms.” They outline future challenges for the utility, including the end of an energy supply contract with Newfoundland-Labrador in 2041, the growing demand for electric cars in Quebec, and the desire of technology giants to establish data centres here to reduce electricity costs for their servers. The biggest challenge of all may be the public’s increasing environmental and social consciousness and citizens’ ability to mobilize and block energy projects that they deem unacceptable. According to Nadeau and Barlow, however, Hydro-Québec remains undaunted, treating challenges as “opportunities to help the company move forward.” mRb

Louise Abbott is the author of Eeyou Istchee: Land of the Cree and director of the documentaries Nunaaluk: A Forgotten Story and The Ahiarmiut: Out-of-the-Way Dwellers.