A review of Chicken Rising by D. Boyd

Creating a graphic memoir of your childhood is a daunting task, particularly if it was not picture perfect. In Chicken Rising, D. Boyd pens a series of vignettes that make up the early life of Dawn, D. Boyd’s younger self, in Saint John, New Brunswick in the 1970s. According to an interview with her publisher, the comic artist initially found the process of “reliving the past and bringing her parents back to life” an enjoyable experience. But Boyd was later alarmed by how many private details she’d divulged and felt guilty about how harshly she’d portrayed her mother, whom she wanted to show as “a complicated person, not a villain.” A self-described introvert, the comic artist said that, in the end, the process made her feel vulnerable and exposed, and gave rise to moments of panic.

When viewed through today’s lens, parenting in the 1970s requires some explanation. While more amusing seventies references like flower power, free love, and Woodstock abound, parenting at that time rarely reflected this kind of open-mindedness. Dawn’s parents, a war-vet who operates a fried chicken restaurant, and a stay-at-home mom, are older and believe in “spare the rod, spoil the child.” Their wooden spoon, the instrument of choice for giving a lickin’, makes two appearances in the first fifty pages. Boyd also shows us the unglamorous yet highly realistic details of that decade, such as short, frizzy perms, beanbag ashtrays, the ubiquitous cigarette, and the late-night movie, which is one of the rare activities that Dawn and her mother enjoy together. The author also skillfully inserts many pop culture references that give the story an extra 1970s layer, which successfully reels the reader further into the story. Although not always an uplifting memoir, there is still a good dose of dark humour. 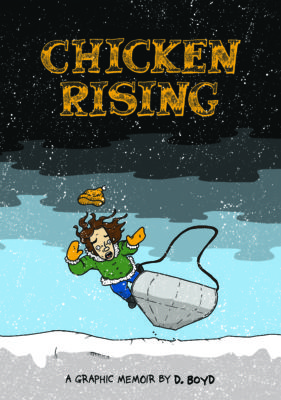 Dawn is a sensitive child who is attracted to the arts. Yet, whenever she expresses her desire to be any type of artist, her mother is quick to discourage her, telling her that she’ll have a hard life. Dawn’s mother Sybil is very critical of her daughter, believing that she is preparing her for life ahead. Sybil scolds Dawn for getting ninety-nine percent on a test and making that one error. Her mother is also quick to take the teacher’s side of a school incident without giving Dawn a chance to explain.

Like many parents of her generation, Sybil sees listening to her child’s feelings and validating them as an indulgence, and an overindulged child is a spoiled child. After a boy punches Dawn in the stomach at school, Dawn reports to her parents that everyone at school is mean. Instead of asking her daughter to elaborate, Sybil responds, “You should be grateful to get an education.” Exasperated, Dawn explains that she was punched, to which her father responds, “Nobody ever got anywhere from being a crybaby.” This is indeed tough love, and life at school and in public is also pretty rough and tumble. But in the end, Dawn finds her people.

Although Chicken Rising makes for some sad reading at times, this debut graphic memoir is one of the most realistic graphic representations of the 1970s I’ve seen in a long time. Boyd also demonstrates that she has a keen ear for dialogue, using many sayings popular among adults in that decade. My parents had some of the same refrains and used the same curse words as Dawn’s parents. There were only a few instances of “Jeezly,” obviously a Maritime expression, which sounded foreign to my central Canadian ear.

At times, I found it hard to believe that this is Boyd’s first book. She draws like a pro, adding plenty of detail to each frame and changing up the panel layout on every page, which plays with the story’s dynamic. I look forward to seeing more work by this comic artist. mRb