A review of Claremont by Wiebke von Carolsfeld

Tolstoy wrote that, “All happy families are all alike; every unhappy family is unhappy in its own way.” Towards the end of Wiebke von Carolsfeld’s novel Claremont, a character presents her sister with a handmade mug inscribed – perhaps defiantly, perhaps apologetically – “Families are like fudge – mostly sweet, with a few nuts.” Claremont traces the intersecting stories of the members of a family that is not only simply unhappy, but reeling in the face of tragedy. In the first chapter, readers follow nine-year-old Tom as his abusive father, Russell, murders his mother Mona before also killing himself. In the wake of these events, Mona’s three siblings, Will, Sonya, and Rose, attempt to rally together to care for Tom. However, the siblings, along with their spouses and children, are simultaneously steeped in their own grief and grappling with rivalries, preoccupations, and narcissism. The novel covers the first ten months of Tom’s life as an orphan, showing how his shattered existence both pulls the rest of the family together and cleaves them apart in ways that may never fully heal. 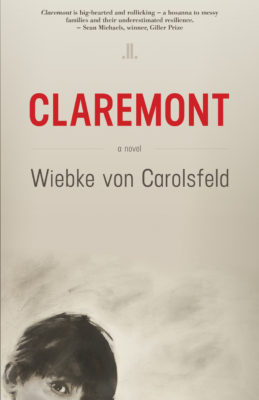 Von Carolsfeld’s novel takes its name from the Toronto street where Rose still lives in the rambling house where the siblings grew up. Using the title to evoke a place is apt, since making locations come alive through careful detail is one of the novel’s great strengths. Von Carolsfeld describes a pantry “loaded with lingonberry jam from the Scandinavian diner on Bloor, preserved lemons from Morocco, tapenade from the farmer’s market in Bracebridge” in order to evoke carefully rehearsed artisanal cosmopolitanism. She also makes pointed observations about the gentrification of Toronto neighbourhoods, where “Eastern European counter ladies [have been] replaced by hipsters making drinks served with a side of fried pig’s ears.” The author’s roots as a filmmaker are evident in the skilled control used to represent the mise en scene of rooms, houses, neighbourhoods, and ultimately, an entire city. Giving the reader a sense of shifting places and spaces is particularly shrewd in a story where Tom ends up being passed around, unanchored, trying to find a consistent and sturdy place where he can begin to heal.

The novel’s other standout feature is the empathy it displays for flawed but ultimately resilient individuals. Russell is clearly the villain of the text, but there are no heroes. In their own ways, Rose, Sonya, and Will all fail to rise above their petty concerns at a moment when their sister’s child desperately needs them. To their overwhelming sorrow, they “held no magic key, had no deep wisdom to impart, and knew nothing of what lay ahead.” This lack often makes them capitulate to their lesser impulses rather than their better ones, and exacerbates pain rather than expediting healing. Yet the tragedy at the core of the novel functions as a kind of purification: against the backdrop of something truly terrible, everything else falls into relief. As Sonya reflects, “If Mona’s death taught her anything, it was to stop living a pretend life, and to accept reality for what it was.” The novel is a portrait of both individuals and a collective family unit who do the work of ceasing to pretend and accepting an almost unthinkable reality. They are, by turns, happy, unhappy, sweet, and a bit nuts, but they are always achingly real. mRb