Climate Change in the 21st Century

A review of Climate Change In The 21st Century by Stewart J. Cohen With Melissa W. Waddell 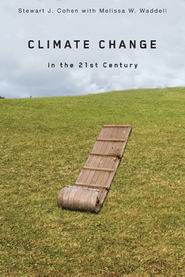 It could be argued that any large, important issue is doomed to wide-spread public indifference or misunderstanding unless it moves from abstraction to fact of life. For that to occur, we need the human element: a hero, villain, or victim of the issue in question. “Global
warming” remained on the fringes of public discourse until around 2007, when Al Gore became an environmental hero, appealing to tastes both middlebrow (Academy Award for his documentary An Inconvenient Truth) and highbrow (Nobel Peace Prize). No one can claim not to have heard of climate change any longer. Whatever you may think of Gore, we probably have him to thank for that.

You can, however, park a fleet of SUVs in the gap between losing ignorance about a given topic and gaining even rudimentary insight. Climate change is a highly complex issue that is fraught with controversy, cherry-picked by headline-seeking journalists, bedevilled with scandal, and analyzed by those with hidden agendas masquerading as “open-minded.” Is it any wonder that even so-called experts throw up their hands in confusion?

Climate Change in the 21st Century is an oasis of substantive information in a desert of disconnected facts and figures; a well-organized and relatively jargon-free springboard to further study. Cobbled from a series of lectures given by author Stewart J. Cohen and streamlined by science writer Melissa W. Waddell, it would make an excellent textbook for the environmental studies or economics student and should be essential reading for policy-makers. Other authors on the subject are bent on arguing – or refuting – that global conditions (past, present, and future) are worsening due to anthropogenic (human-caused) greenhouse gas emissions. Cohen takes this thesis as fact and proceeds from there.

Cohen discusses – chapter by chapter – atmospheric, social, economic, and ecological aspects of climate change and breaks down each of these into subtopics. Many aspects overlap in one way or another for the very obvious reason that interconnection is the way of the world (and we might not be in quite so much trouble were we to remember this more often).

For example, consequences to ecosystems – such as expanding deserts, with a subsequent loss of biodiversity and fresh water sources – can lead to social upheavals like emigration (environmental refugees) and commodity wars. Disrupted markets and economies can block attempts to mitigate or adapt to harm, such as when municipal budget cuts stall improvements to public transit and water filtration plants. Understanding and dealing with climate change not only involves integrating these subtopics, but doing so across many highly distinct societies in vastly different terrains – and with future generations as well as present interests kept in mind.

The book is rich with scientific and technical terms without being stodgy, and that is its primary strength. (Thus its appropriateness as a reference book.) Its breadth, though considerable, does not come at the expense of depth. Graphs, charts, matrices, and figures provide additional consolidation and tabulation of data.

One of the book’s problems, however, lies with those very illustrations, all in shades of gray. The gradations of, say, ocean warming, would be better depicted in contrasting colours. Without them, certain charts are almost useless as visual tools. Another, smaller, quibble is the authors’ use of “earth” instead of “Earth”: if a book on the environment won’t give our home planet the respect it deserves (other planets are always capitalized), what will? Editors of subsequent editions may want to consider these imperfections.

For students, major decision-makers, or concerned, college-educated voters, Climate Change in the 21st Century is a valuable guide to a global reality that is abstraction no more. mRb