A review of Cock-a-Doodle-Doo by Pan Bouyoucas

Leo Basilius, the protagonist of Cock-a-Doodle-Doo, is a sixty-year-old author who is tired of the crime series that has brought him fame, so he moves to the Greek island of Nysa to write something new. Cock-a-Doodle-Doo appears to be about a writer struggling and failing to write, and his late-midlife crisis – complete with a nagging but beloved wife, a trip to the Mediterranean, and a beautiful young object of temptation who seems inexplicably determined to catch his eye. It turns out to be a story about something else.

If one is invested in the plot as it is originally framed, then one will probably feel considerably rewarded by the ending. That’s a big if.  As a writer, I’m interested in the vicissitudes of the writing life; as a reader of fiction, I’m not, and I wonder whether many others are either. I also have little patience for yet another story about a man getting on in years and being tormented by the loss of his youth, unless it brings something very new to the table. In particular, the character of Alicia, the beautiful young island resident with an emotionally abusive boyfriend and an apparent attraction to the passive, not to say inert, Basilius is trying. 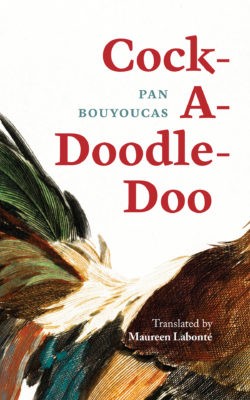 That said, from the beginning, the novel has its charms. The explorations of the writing process are apt; for example, this metaphor for the challenge of plot construction is one of the finest I’ve ever read:

“I find myself in a building I’m not familiar with. I have to draw a plan of the place but the building is plunged in darkness. I try to find a light switch by feeling my way along the wall. Suddenly, my hand happens on a candle. I pick it up and continue to look, still groping in the dark. Eventually, I find a book of matches. I light the candle and by the light of its flame, at last, I find the light switch. I blow out the candle and now, with the light on in the room, I’m able to find the light switch for the next room and the next and the next until the whole building is ablaze with light.”

I also like an imaginary friend, or even better, an imaginary frenemy, and Basilius is haunted by one of his creations: Inspector Levonian, the star of Basilius’s now-abandoned thriller series. Levonian is incensed that Basilius has left him suspended in a coma at the end of the most recent, perhaps the last, of the crime novels, and has not given him the happily-ever-after Levonian believes he deserves after all he has endured. He is not himself; he hounds Basilius crassly about his failure to take advantage of Alicia’s attentions, for example, something the Levonian of the novels would never have done.

Basilius is disturbed by Levonian’s rants, and tries to silence him through various means; the most promising is an inspiration that comes to him through the crow of a rooster. The desire to understand what roosters are saying turns Basilius away from the predictable internal conflicts he’s been struggling with, and gives the reader hope that the looming clichés might not materialize.

And they don’t; the novel resolves in a way that this reviewer, at least, found unexpected and touching. Nevertheless, the first half or more of the story may be too easy to dismiss. Despite some inventive devices, for much of the novel, Cock-a-Doodle-Doo feels like a story that’s already been told many times. It isn’t, but sticking around long enough to find that out may take some patience.mRb