Poets of Governments Past

Conversations with a Dead Man

A review of Conversations with a Dead Man by Mark Abley

Hindsight is 20/20. Or is it, really? Do we ever truly get a clear picture, or are all views inherently variable, endlessly evolving in accordance with the viewer’s vantage point? If history is a trustworthy example, much of what we hold true today will be found, at very best, naïve by future generations. At worst, our visions will be deemed offensive, oppressive, or even downright detestable.

Canadian poet and prose writer Duncan Campbell Scott (1862–1947), the primary focal point of Mark Abley’s new biographical book, exemplifies the latter. While highly revered during his lifetime – he was a former president of the Royal Society of Canada, a founder of the Dominion Drama Festival, and an Honorary Doctorate recipient from Queen’s University and the University of Toronto – Scott has since slipped down the slope from fame into infamy. With certain historians now linking him to the cultural genocide of Canada’s Aboriginal peoples, his posthumous name has suffered severely. 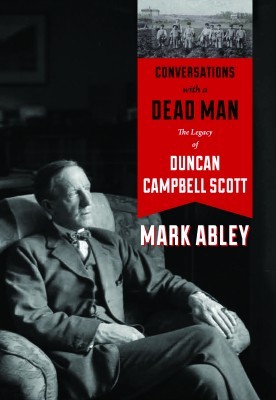 What caused Scott’s vertiginous fall from grace? Certainly not his art. “As a poet, Scott could rise to empathy,” Abley recalls, at a time when intolerance prevailed. The answer is surprisingly mundane: the writer’s downfall was his day job.

Scott worked tirelessly for fifty-two years as a civil servant for the federal government, giving his days to the department of Indian Affairs at a time when, sadly, the government’s views on “Indians” were clouded with colonialism. Starting out as a copy clerk, he worked his way up to deputy minister. Although he gained respect throughout his career, he descended into a demonic doghouse as subsequent generations clued into the consequences of his department’s aim: to assimilate First Nations peoples into mainstream Canadian culture.

Today, Canada’s former hero is compared to the likes of Hitler – a charge that would cause even the deadest of dead men to stir in their graves – which is exactly what happens in Abley’s compelling work of creative non-fiction. Unable to rest in peace, the ghost of Duncan Campbell Scott visits the Montreal author in his home, requesting help to clear his name. Abley engages him in a heated imaginary debate, seeking explanations for the seemingly irreconcilable sides of his legacy. “How could a poet set out to destroy another culture?” challenges Abley, himself a poet.

Abley has found a creative way to deliver a haunting history lesson, deftly digging up facts and conjuring collective memories that aren’t easy to digest, yet perhaps necessary to face at this particular juncture in time. His probing look into the residential school system that Scott oversaw, for instance, is profoundly unsettling, recalling how, in the name of “civilization,” Aboriginal children were segregated from their families and communities and sent to schools where a grotesque array of abuse was reported, and the death toll from disease was heartbreakingly high.

Yet one can’t help but keep turning the pages, wanting desperately, like Abley, to gain clarity on Scott’s actions. Commendably, Abley has addressed a highly charged question in a balanced, compassionate manner. By considering Scott’s plausible role as a scapegoat and comparing him to his contemporaries, he contextualizes the civil servant’s vision, yet never condones it, maintaining a critical eye throughout. All this he does with utmost regard for Canada’s First Nations, providing well-researched background material that expands perspective on current uprisings, such as Idle No More.

The book may also inspire broader questions on the overall future of multiculturalism. “The Indian shall become one with his neighbour in his speech, life and habits, thus conforming to that world-wide tendency towards universal standardization,” wrote Scott in 1919 while in charge of Indian Affairs. In our increasingly westernized world, some will find these predictive words chilling, and surely wonder how today’s views are shaping up from the ledges of tomorrow’s lookouts. mRb