Through a Different Eye

A review of Cyclopedia Exotica by Aminder Dhaliwal

Aminder Dhaliwal’s graphic novel Cyclopedia Exotica takes place in a world where the Cyclops, an exotic subspecies of humans marked by their single eye, live alongside “two-eyed” humans. The book opens with an in-depth history of the species before delving into several Cyclops characters’ stories.

It’s hard to choose which sociological situation in the book has the most relevancy: Being singled out immediately. The desire to feel superiority. The power of advertising to both give and take, with permanent results. Outdated concepts guided completely by prejudice. Internalization of those same outdated concepts by present-day folk. The current, intense political climate allows us to immediately pair each character’s situation to a very real physical and psychological human experience, which Dhaliwal constantly contrasts with old-world ideas and norms.

Many of the issues touched upon are unfortunately recognizable by their worst-case scenario, seen in real-world headlines. They’re also issues any outsider, whether belonging to a minority or just having trouble fitting in, can relate to. And we identify with these characters, their intimate details and personal embarrassments. 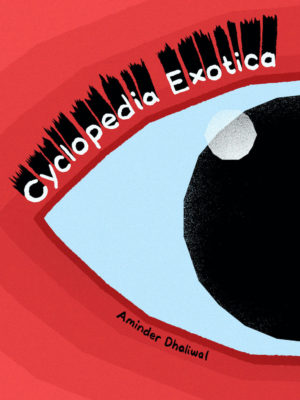 The idea of women being simultaneously sources of celebration and blame is beautifully told through the character of Etna, the first Cyclops to appear nude in a national publication, allowing for a particular body type to be seen in the media. The appendix of Cyclopedia Exotica tells us that “the cover would resurface every decade. Depending on the time, she was a pioneer or a traitor.’’ As Etna grows older, she then is seen as a hero. This rings loud. How many musicians, models, actresses, celebrities, who were seen as sexist icons in the past, are now pioneers/trailblazers? Successful throughout their career, also bullied, and shamed through outdated ideas of purity, are they a representation of a sexist ideal, or completely ahead of their time? The ideas in Cyclopedia Exotica about youthfulness, maturity, and sexuality are relevant to all women.

There are more gazes. One from outside the bubble of subconscious advertising, a navigation tool for businesses preying upon that delicate, malleable, very profitable thing called self-esteem. This is shown through a character named Bron, a Cyclops who undergoes surgery to give him two eyes. Bron’s is one of the most touching stories. The surgery goes badly, and results in Bron having to permanently wear an eye patch over his new eye. His mental hang-ups are almost debilitating. Bron’s story is one of the heartstrings of the book. Through him, we deal with issues of extreme isolation, both mental and physical. Cyclopedia Exotica’s timing is perfect.

The simple, quick line-art style partners really nicely with the colouring by Nikolas Ilic. Prior to publication, the novel was serialized on Instagram. The nature of Instagram’s aesthetic, with its daily panels, as well as the ideas it brings up against fake vs. real life, make the platform a perfect museum for the story. It’s fun to imagine this story coming out as a newspaper comic in earlier times. Reading the comics over breakfast, taking a look into how hypocrisy and prejudice can affect people, would have been a great meditation before the workday started. Today, it’s an all too relevant reminder that we should get to know our neighbours. mRb