A review of Desire Lines by Mary Soderstrom

There is an inherent risk involved in putting together a collection of short stories. Include stories that are too alike, and readers may feel they’re reading the same story over and over. Include stories that are too different, and the collection can seem incoherent when viewed as a whole. A thoughtfully structured collection, Mary Soderstrom’s Desire Lines: Stories of Love & Geography manages to strike an elegant balance between these two pitfalls.

Desire Lines revolves around a set of themes, notably the desire and geography of the title, yet each story approaches an idea in a different way. Desire lines are defined as the “paths that people take when they want to go somewhere,” which “frequently have no relation to the formal layout of roads and sidewalks.” The characters taking these paths are fascinating, complex, and refreshingly diverse. Soderstrom employs a wonderful economy of language, so that much is conveyed about the characters in a relatively short space. 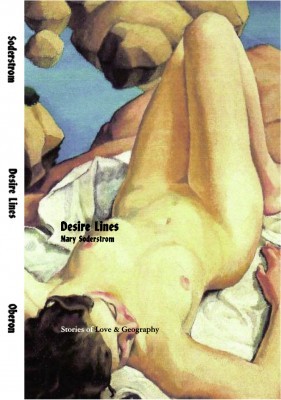 The collection is divided into three parts. The first, “Substrata,” deals with things lying beneath the surface, both literally and figuratively: a young girl falls into a river, a female engineer goes underground to work in mines and is forced to deal with the sexism underlying her chosen profession, and a young couple must decide their future while leaving a lot unsaid. The second part, “The View from Here,” explores the unique viewpoints of several characters coming from different walks of life.

The final part, “The Forces of the Earth,” deals in extremes: one woman becomes obsessed with chasing volcanoes, as “the desire to get closer to the volcano mounted in her like molten rock in the mountain itself.” The characters in each of the final stories are faced with the inevitability of death.

Careful reading reveals subtle links between stories that at first seem unconnected: one story focuses on the granddaughter of a character from an earlier story, and the unnamed archivist of one story turns up as the narrator in the final story. But as a whole, the collection does not feel overly self-conscious, unlike some collections of linked short stories. There are just enough common narrative threads to keep it all tied together, albeit loosely.

A mastery of perspective is also evident. In “Ancient Faults,” we see the events through the eyes of the young narrator, Rebecca, who is watching her mother, Dorothy, and does not entirely grasp what we can:

Dorothy does not turn her head for the usual two quick kisses that grown-ups here give each other. Instead she meets his mouth with hers, Rebecca sees, and he puts his arm around her…. They stay like that for longer than Rebecca expects.

The gap between what Rebecca sees and what we interpret adds another layer to the story.

Soderstrom offers sensitive, attentive, and compelling portraits of relationships, including a character who has grown too large to have sex with his wife without crushing her and an ex-priest who takes great pleasure in his much younger new wife. But perhaps the most developed and convincingly portrayed relationship is the friendship between two women, Libby and Gail, explored in the longest story of the collection, “Madame Pele Is Not Amused.”

When Libby sends Gail flowers to apologize for getting drunk and vomiting all over Gail’s bed and hallway, Libby adds that in the “press of emotion,” she forgot about the bag of gifts she’d brought. It is precisely this “press of emotion” that is so beautifully expressed in these stories. The emotional tension makes the release of narrative conflict brought about by skilfully written endings all the more satisfying. mRb