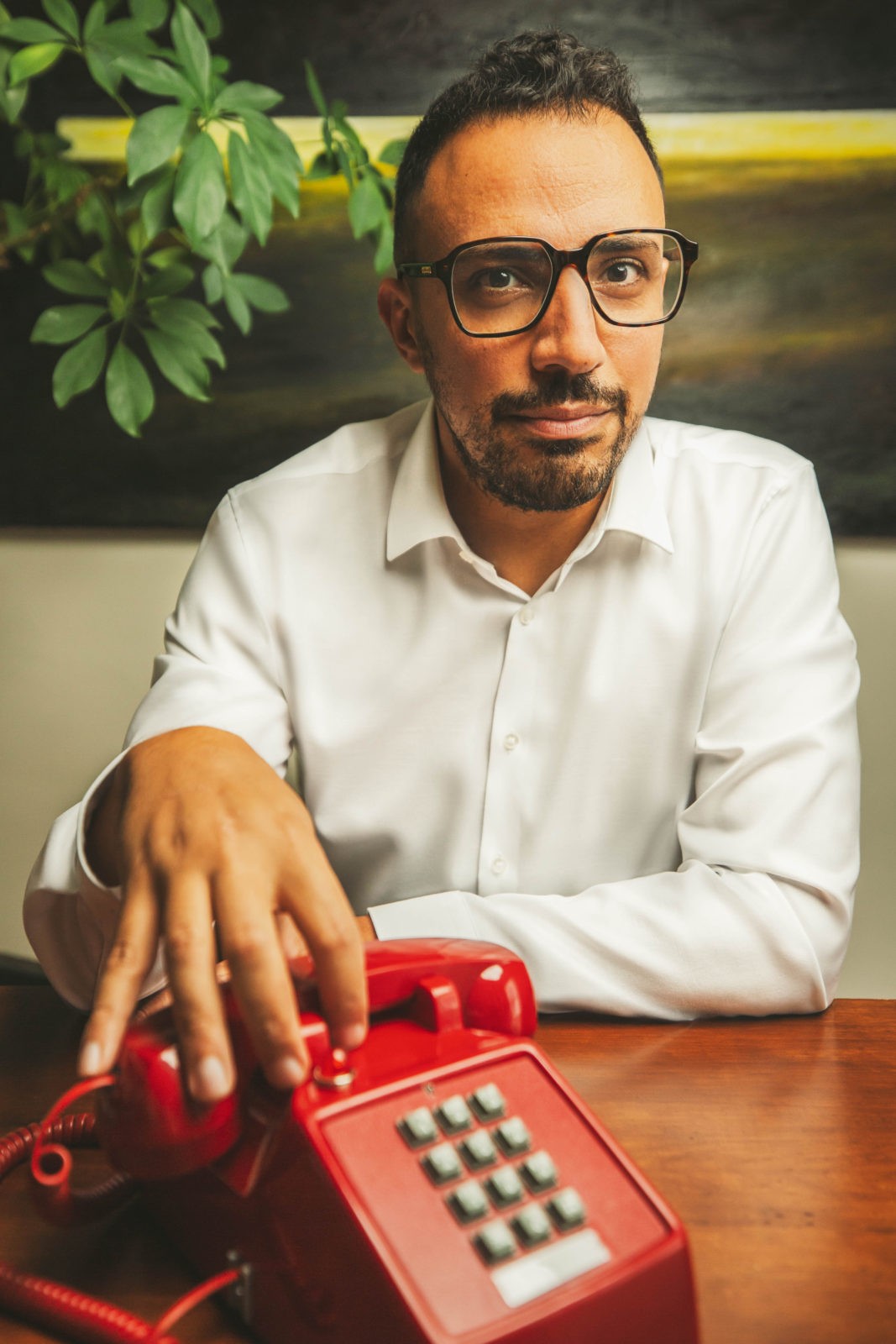 “When the lips are silent, the heart has a hundred tongues,” said Rumi, the thirteenth-century Persian poet – an apt truth for Muna Heddad, the engaging protagonist of Dimitri Nasrallah’s poignant fourth novel, HOTLINE. A single mother with an eight-year-old son, Omar, Muna has escaped Lebanon’s civil war and immigrated to Canada with dreams of working as a French teacher in Montreal. However, the only job she can find is at a hotline for a weight-loss centre, where she fields calls from strangers, hungry to unload secrets into a receptive ear. Muna – Mona to her clients – is ready to handle this “onslaught of human emotions”; listening is her superpower.

Nasrallah credits his mother for inspiring much of HOTLINE, he tells me over Zoom, but it took a while for him to be ready to write this story. “When I became a dad, I grew closer to my mom,” he explains. “My mom is brilliant, an educator, yet no one would hire her as a French teacher when we arrived in Canada. She had to empty her head and reinvent herself, taking a job she didn’t want.”

Nasrallah also revisits his own childhood trauma in HOTLINE. Born during the Lebanese civil war, he retains memories of being shut inside. “I heard guns going off, car bombs exploding. My world became smaller.”

The family fled Lebanon in 1982 for Greece when Nasrallah was five years old. They arrived in Canada six years later, a time when French-speaking nationals from Lebanon were prioritized as immigrants, especially professionals, such as his parents. Like Omar in HOTLINE, Nasrallah felt neglected by his mom during those early years. “I felt ignored, abandoned. Later on, I began to soften as I developed a deeper understanding of what my mom had been through and was more at home with my own life.” 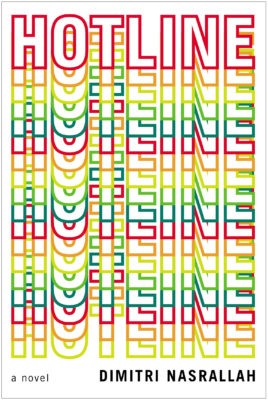 Nasrallah does a superb job cracking open Muna’s point of view, interweaving her memories of Lebanon with scenes of her new life in Montreal. “I had a great deal of fear going in,” he confides. “Why can’t I look clearly into my own mother? But once I got into the voice, it was freeing, formative, bridging the gender divide.” Nasrallah gave his mother a copy of HOTLINE for Christmas: the novel is dedicated to her.

Arabic is threaded throughout HOTLINE without italics, paraphrasing, or a glossary, which enables Muna’s voice to flow. “Arabic is a famously individualized language,” Nasrallah says; “I had to take personalized Arabic and make it understandable to the reader.” He succeeds masterfully in embodying Arabic, which makes a powerful statement about decolonizing language, as readers who do not speak Arabic can glean meaning from the context.

Though Muna is scarred by the traumas of war (her husband, Halim, was kidnapped just as the family was ready to flee Beirut), she remains resilient. As she sizes up the well-kept lobby of the weight-loss centre, she thinks, “I begin to imagine myself anywhere and everywhere in an effort to will the world to bend my way for once.”

Newly arrived in Montreal, Muna teeters on an emotional tightrope between her old and new lives, her former and current selves, at home in neither. In Canada, she relives flashbacks of the Lebanese civil war – hiding out in storage lockers like cages, crushed together with terrified neighbours – while escaping into ongoing conversations and fantasies of physical closeness with her missing husband. Her joys, such as seeing snow for the first time, winter hiking on the mountain with Omar, or making a friend, are interspersed with the pain of being invisible and the unrelenting prick of maternal guilt. Muna’s work requires her to leave Omar home alone after school, where he parks himself in front of the TV, zoning out to shows and music videos. “It’s my fault […] I’m never here when he needs me. I’m too distracted. But I can’t see any other way to take care of us.”

As Muna listens to strangers’ confessions, she gains insights into herself. “When I look for work or shop for food [people] speak to me in a certain way, impersonal, stiff, wanting to get away. […] They would rather I remain invisible. But now I’m seeing that no one pays any attention to anyone else, and so many people behind these desks and phones and offices are lonely.” These perceptions help to bridge the gap between her and pure laine Quebecers. She understands that many of her clients crave “la touche humaine” more than a diet plan.

Little by little, Muna and Omar integrate into their new life. Playdates with Omar’s school friend, Chang, lead to a friendship between Muna and his mom, Winnie. This new bond evolves into a burgeoning private tutoring opportunity, as Muna begins teaching French to Winnie and her friends, all Chinese immigrants, and later, to a larger group at Winnie’s church. Meanwhile, Mona becomes a star at NUTRI-FORT and is promoted to Assistant Manager.

HOTLINE is intimate and voice-driven, yet Nasrallah creates vivid ancillary characters, such as Muna’s kindly landlord, Mr. Saltzman. When Muna confides to Mr. Saltzman that Halim is dead, not able to share the whole story of being a widow with no husband to bury, he says, “my family knows a few things about living with those ghosts.”

Nasrallah’s prior three novels have received considerable acclaim, and I’m interested in his path to becoming a writer. Early on, he was pressured into business school, he tells me. Floundering, he took an English literature elective and had an assignment to write a short story. “I locked into that project with a dedication I’d never felt for anything else,” he says. “My professor saw something promising and we had a conversation about the writing life. Needless to say, I dropped out of business school and struck out on my own to pursue writing in Montreal at Concordia.”

I admire how Nasrallah plumbs new territory with each novel. That said, underlying themes and concerns thread through his oeuvre, such as emotional and geographic exile and “family,” he adds, “tension between family members.”

These days, Nasrallah is translating the novel Sans capote ni kalachnikov by the Congolese Canadian author Blaise Ndala and is busy as editor at Esplanade Books. “Being an editor has helped to shape me as a writer. It’s immensely rewarding to nurture work that needs to come out and to build our Montreal writing community.”

“So what do you look for in your acquisitions?” I ask. “Does it dovetail with what you hope to achieve in your own writing?”

“Sure,” he replies. “A unique vantage point, a readiness to be honest. Authenticity. Necessity on the page.”

A new idea is percolating for Nasrallah’s next novel. “I’ve always been fascinated by the modern map of the Middle East that was drawn up by the colonial powers in 1916 and all of the conflicts in that region ever since,” he says. Readers eagerly await.mRb