A review of Distorted Descent by Darryl Leroux

Darryl Leroux’s recent book, Distorted Descent: White Claims to Indigenous Identity, traces the practice of race-shifting (from white to Indigenous) by white French descendants, where settlers, spurred on by their online and IRL communities, scour their family trees in search of Indigenous ancestry to justify their claims to be Eastern Métis, an invented Aboriginal nation. Leroux begins by digging deep into online genealogical forums, where posters often initiate conversations with questions like “I think I’m Indigenous, but I don’t know how, can anyone help?” Invariably, help is offered.

As Leroux points out, it’s relatively easy for descendants of early French colonists to find Indigenous ancestry if they go back far enough, but they have to go back very far: twelve generations back, or three centuries ago, most will find that of the 2,000 ancestors they have uncovered, one of them will be an Indigenous woman. Leroux writes that even if “it is probable that every ‘old stock’ Québécois has at least one Aboriginal ancestor, it is much more likely that they have several English, Belgian, German, Swiss, Irish, and/or Portuguese ancestors.” His meticulous research reveals that, contrary to myth, very few Indigenous women had children with French men. By “few,” I mean there were four, and Leroux can name three of them – Marie Sylvestre, Marie Miteouamegoukwe, Marguerite Pigarouiche – one of whom is his ancestor, too. Yet, he does not claim to be Indigenous. Why do the others?

In Leroux’s study, the people claiming Indigenous identity are white rights activists living in two rural regions – Saguenay and Gaspésie. Yes, you read that right. White rights activists have opportunistically claimed Indigenous identity in an effort to maintain hunting and fishing rights in their regions and thwart the repatriation of land to actual Indigenous peoples. In other words, the book documents a real-life mindfuck. 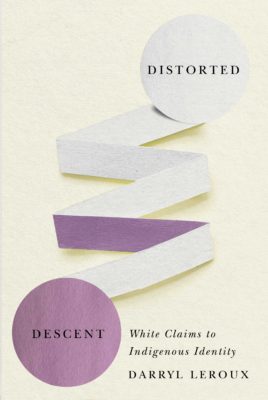 Since 1982, Section 35 of the Canadian Constitution has recognized and affirmed aboriginal and treaty rights, but it has been left to the Canadian courts to elaborate upon what is meant by all of the terms above, including what it means to be Métis. In 2003, the Supreme Court of Canada established the so-called Powley test to evaluate the legitimacy of such claims, yet even when they fail time and time in the courts, the new-found identities are often accepted in the court of public opinion. Why?

Of the Canadian provinces, Quebec has the smallest proportion of Indigenous peoples and, Leroux implies, may be the most ignorant about Indigenous culture. Certainly, these claims rely upon ignorance of Indigenous systems of citizenship and kinship, territorial rootedness, and of the Métis culture that emerged on the Northern Plains in the seventeenth century. Significantly, those who claim to be Eastern Métis have no connections with living nations today and are rejected by them wholeheartedly.

Perhaps what is most shocking about this book is its lack of outrage, its restraint. Occasionally, Leroux allows himself to note the “boldness” of the assertions he documents, but he refrains from calling them what they are: absurd iterations of a colonial, racist mindset. The absurdities accumulate steadily over the course of the book, though, making Distorted Descent an important addition to the tool kit out of which a decolonized future is being doggedly built. mRb