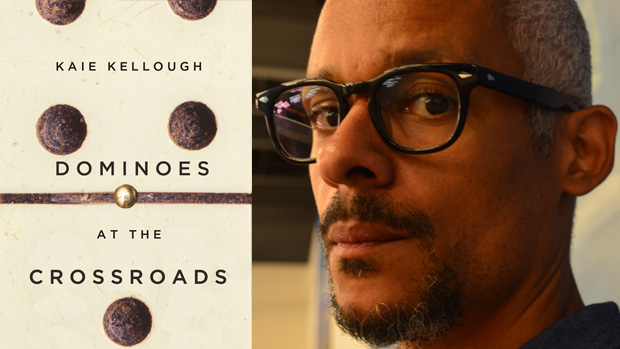 Reading and Writing at the Crossroads

Dominoes at the Crossroads

Kaie Kellough can be serious. His general demeanour is that of considered statements and well-placed pauses. He speaks like a poet. The thing is, spending too much time enjoying the way he puts sentences together, both on the page and in person, means that the accompanying sly humour can be missed.

Kellough is a Prairie-raised Montrealer – specifically hailing from Calgary – who has called the city his home for over two decades. He’s the author of multiple acclaimed books of poetry, an experimental novel, Accordéon, and is a bit of a local luminary where spoken word is concerned. Dominoes at the Crossroads is something new, though: a book of short stories that ring with the wordplay of a poet alongside the cleverness of someone who knows how to spin the tightest and most engaging of yarns.

When talking to Kellough about the work, I am required to make an initial confession: it’s incredibly difficult to read without incessantly looking up all of the references. The act of reading becomes a bit of a game that lives up to the title, a scavenger hunt fuelled by a desire to track the links between the stories as well as between the work and real life. He smiles and says, “There are a lot of red herrings in there too, I think. Things that don’t exist, or things that are slightly off. But thanks for reading it closely. That’s kinda cool.”

I’m glad he approves of my strategy in dealing with what I see as a very playful text, where versions of Kellough intermingle with other characters that possess (or seem to possess) elements of real people. The book places these actual and fictional people in the same spaces at the same time. Knowing or even living in these spaces that are described, from Calgary, Alberta, and Montreal, Quebec, to Kingston, Jamaica, and Georgetown, Guyana, leads me to multiple moments of questioning. Is the text recounting things that actually happened? Is it just a different remembrance? 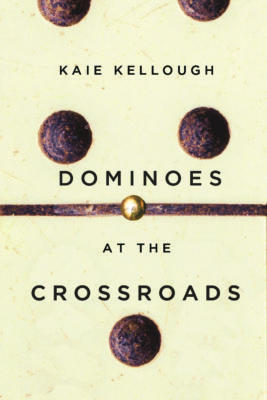 Dominoes at the Crossroads
Kaie Kellough

The collection begins with what might be referred to as a parody of an academic paper – complete with ample footnotes. The paper ostensibly comes from the future while reflecting on the past through the work of a writer named Kaie Kellough, who may or may not be the very same person who has written the book in which this paper is found. The essay suggests that Montreal itself is in a state of flux – that climate and demographic change are going to have a range of impacts on the city. This future vision then gives way to stories about characters who exist in what seems to be present-day Montreal (and other parts of Canada, as well as the Caribbean) who are artists, property developers, shopkeepers, students, poets, parents, children, and so many other identities in between. Particular books and magazines make appearances, songs are described in detail, specific events happen. Things in the stories seem tremendously true to life, but then, when searching to verify details, it seems like there’s a mixture of real and non-existent things and people populating each story. When I ask about this as a potential approach to fiction, Kellough explains:

I think about it as how memory works, right? When you remember something, the memory is always tinged with nostalgia and with some regret, desire for something to happen a different way. It’s also coloured by your later experiences. If something occurred, the moment you start to remember it, you’re constructing it as fiction. Because you can never remember something exactly as it happened [laughs]. It only happens as it happened once, and then everything else is just a reconstruction. When you try to put it into language to recall it again, there’s even more sort of slippage of facts… it slides closer into fiction. I wanted to capture that process.

In addition to having some fun with memory, Kellough is also experimenting with how to document diaspora. The book’s use of references helps draw the reader into this documentation. In Kellough’s words, it is a “game of retracing the steps in assembling origins from disparate bits and fragments of information.” But this is not an individual process; “It’s about a collective process that happens in different places in Canada with people from different Caribbean backgrounds and related to those different backgrounds, a collective diasporan experience.”

And it is important to Kellough that perspectives on different spaces are represented through the majority of Black characters that populate his stories. As he says, “there are Black people in Canada who live in multiple cities, so Black and Caribbean Canadian identities are étendues, spread out across Canada; it is not localized in specific places and it is important to show that, to kind of explore the breadth of that, the pan-Canadian nature of that.” This is reflected in the how the stories in Dominoes at the Crossroads connect to each other in a range of unexpected ways, providing a broad overview of experience rather than a series of disparate, discrete, self-con- tained tales.

Each story features characters that are, as Kellough describes “resolutely Canadian,” but at the same time are dealing with a set of relationships between cultures. This, according to the author, “proves to be a barrier even to their entry into their maternal and paternal culture. One of the defining experiences I think that they all have is that when you are living between cultures, a strange thing happens, which is that you begin to see the cultures overlap and one culture begins to inhabit another.”

This overlap of cultures extends to an overlap of stories that also reflects how the spaces in which we live are more fluid than we might think. “The idea of ownership of the city or ownership of the particular neighbourhood or the culture, it shifts,” says Kellough, “And in many cases it’s changed. And before, you know, it’s changed, right? Or it’s changed before the dominant culture admits that they are aware of it. And it’s changed in Montreal. Montreal has changed dramatically.” His stories reveal the reality of the title – playing a game in a space that acts as a crossroads – where things are changing as individuals and communities travel through.

Characters travel from one part of Canada to another, but also to the Caribbean, Europe, Africa, reflecting on movement and migration. The book contains, incidentally, one of the best takedowns of On the Road, observing the entitlement of the characters in Jack Kerouac’s classic – they never meet any limitations, making the book generally disappointing. Kellough’s book, however, demonstrates the challenges and creative potentialities of movement, of migration, of overlapping cultures, of pushing borders and boundaries. His characters reach destinations in the past, present, and future. The wide range of diaspora existences is interrogated, and the reality of interconnectedness – the state of being at the crossroads – is consistently underlined. mRb