A review of Drama Queens by Vickie Gendreau

“I have only two subjects. Death and stupid girls.” This provocation, from Vickie Gendreau’s second and final novel, is as thoroughly metamodern as any line in it. Gendreau operates in a mode that oscillates between nihilism and sincerity, a whirl of impenetrable irony. Nothing Gendreau writes is true or serious, but everything is.

While Gendreau interrogates her two stated subjects, she also hydras and beheads the rest of her narrative axioms with the self-mythologizing imperative and necessary narcissism of a dying woman. She mines sex, fame, and career as thoroughly as her mortality, her body, and her friendships. (No reviewer can avoid the fact that Gendreau was twenty-four when she died of the brain tumour that she’d documented in her first novel, Testament, and that Drama Queens was published posthumously.)

Appropriately, the English translation by Montreal’s Aimee Wall channels a pulsing abrasiveness and vicious charm in choppy, soaring syntax. Wall notes that she made the choice to allow Gendreau’s (liberal and reportedly polarizing) use of English to recede without demarcation. It seems fair to me that us monoglot Anglophones will just have to suffer the loss. 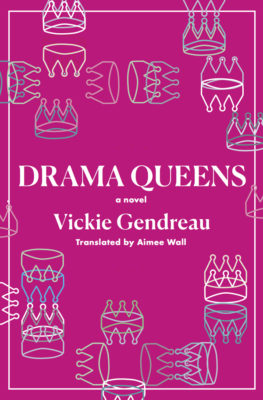 Where Testament was hobbled and fuelled by the insulted vanity of rejected love, on top of the injury of her recent death sentence, Drama Queens gives us a woman who is well aware she’ll “never again wake up in someone’s arms. Unless [she] pay[s] them.” Gendreau’s alter ego, Victoria Love, wallows, and she muscles out of her wallow to paint herself in lipstick while detailing her life in diapers and stretch marks. Early on, she announces that she will write ten books, live ten more years. But it quickly becomes clear that this book must be all ten in one.

In fact, the narrative – formally non-Euclidean but always flashing with manic wit – bounces between a fistful of first-person avatars. First among them is Victoria Love, the dying twenty-three-year-old writer whose debut novel, to her annoyance, loses an important prize to “the story of a guy tripping on mushrooms.” Love has a performance-artist friend named Anna Ketamine, and it’s tough to tell whether Love is describing Ketamine or her art when she says, “You speak Finnish, nobody understands, it’s like you’re vodka personified.” Then there’s Maggie Books, a graphic designer for La Presse who writes the brutal, bizarre, sometimes funny screenplay synopses scattered throughout the text (e.g., “Vain: A Dario Argento Film,” where Nelly Arcan is hanged with her own pulled veins by a Luka Rocco Magnotta stand-in). Later on, Gendreau also writes snippets of a self-conscious novel from the perspective of Marie-Antoinette Love, Victoria’s “weaker though older” sister. Every one of these women addresses us with diaristic intimacy, though facts and actions always twist back around the same double helix: Victoria is a writer; Victoria is dying.

The book opens with a foreword from Mathieu Arsenault, writer and Gendreau’s literary executor, who describes the event – a few weeks before her death and well before publication – where Gendreau read her entire manuscript aloud for five hours to a packed auditorium. It’s appropriate that in many ways Drama Queens feels less like a novel than a record of that one-woman pièce de résistance. Namely because Gendreau writes in so many modes: ekphrasis for imagined performance art; the aforementioned screenplay synopses, which are both jokes and poems at once; tickertape consecution that would get Gordon Lish hard (“Don’t follow me into my abyss. It’s not a good idea. Kisses everywhere. You touch your pants. You’re embarrassed. You can’t get an erection. It’s normal. I’m not sexy anymore.”) And, then, of course, there’s the confessional: the literary inheritance of every “stupid girl” who ever dared to write about herself.

As she writes against her own death, Gendreau is a showy, insistent stylist; a diva; but a sad, sleepless, lonely one. She groans that her “story to break your heart is not working,” but it is. She demanded to have the last word on her life and her work, and we have to give it to her: “Books. The word looks up at me, insistently. What time is it? Already. It goes quickly. I didn’t even have the time to say something interesting.” It’s not true, she’s not serious. It is, she was. mRb