A review of Ducks by Kate Beaton

Kate Beaton’s first full-length graphic novel, Ducks, is a memoir chronicling her two-year stint in the northern Alberta oil patch. Hailing from the tiny town of Mabou on Cape Breton, and aiming to pay off a humanities degree’s worth of student loans, she retraces the path of a long line of East Coasters who follow the good jobs out West. 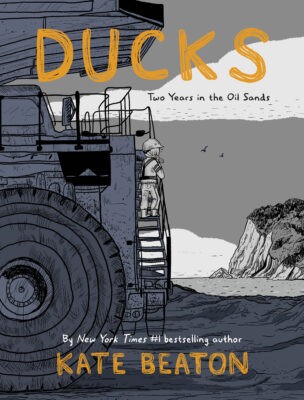 In a place where the male-to-female gender ratio is around 50:1, a lot of what we see in Ducks is men – men asking invasive questions, men spreading rumours, men making lewd jokes, men jiggling their coworkers’ dormitory door handles at night on the off chance that some unsuspecting newb might have forgotten to lock hers. We see men losing their sense of the men they had been among their own people.

At times, it’s a pretty unrelenting tour of the infinite petty humiliations of being one of the few women in a cold, barren, remote, and homosocial place. In spite of the damage they sometimes cause, though, these men aren’t really the targets of Beaton’s ire. She’s showing us how their non-stop casual sexism has been honed by loneliness, sharpened and made dangerous by months isolated from their family, friends, and other tethers to the outside world.

Which brings us to the titular ducks. Noting how insulated the workers up north were from the news (she was there between 2005 and 2008), she reproduces a CBC news piece about 1,500 birds trapped in toxic tailings. It was one of the first times that national attention turned toward the sands before a broader awareness of its environmental cost emerged. The incident also seems to spark Beaton’s own interest in the bigger picture, prompting her to consider extraction’s impact on Indigenous communities and nature, as well as how the oil companies have structured their workers’ lives and relationships.

The heart of Beaton’s story is the pressures that put people there – the hollowed-out Maritime economies, crude’s easy money, and capitalism’s at-any-cost ethos. She suggests that traumatized workers, wildlife, and Indigenous people are the oil industry’s collateral damage, all trapped in this devastated place like stuck ducks. Nobody seems to particularly want or like life there, and yet they stay, on and on.

She draws out these themes with a light touch, sure that her readers will see the connections themselves. The drab retro signage of Fort McMurray shows what a town is when it’s designed entirely for men from elsewhere. Massive machinery dominates the desolate landscape, and the people who operate them seem small indeed against this scale. Beaton’s commanding black and white graphics effectively convey the dishwater-grey dullness of survival with little by way of warmth.

Even in Ducks’ darkest moments, Beaton’s wry humour gives her story some levity. We see her plugging away on early strips of Hark! A Vagrant (her much-loved series of sardonic intertextual riffs on literature and history), which will go on to make her name in the comics business. She pays off a steep tally of student loans in just a couple of years, creating a foundation for the life that she wants to build after, just as she’d hoped it would.

And while a quiet bleakness pervades the work, she also spotlights how the kindness of near-strangers, driven by the still-strong bonds of a faraway home, can offer some sense of belonging anywhere.mRb