A review of Durable Goods by James Pollock

“Perhaps if what is written here is good, / it may forgive the chainsaw,” James Pollock writes, of a book, in the opening poem of Durable Goods. Wry, invitational, buzzing, “Book” is indicative of the nature of collection to follow. 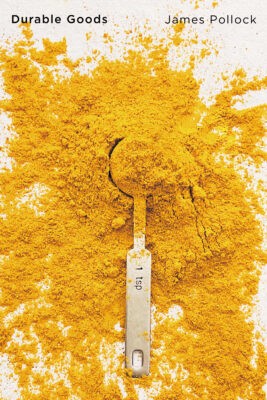 Readers of poetry will recognize that Pollock, in his newest collection of poetry, is working within a specific tradition, that of the thing-poem (or Dinggedicht, as it was developed in German by Rainer Maria Rilke) in which the poem’s speaker is concerned with a single object, typically to a point of discovery or profound alienation. Pollock’s mode for exploring the nature of a thing is not by examining it idling or describing it in detail – the collection lacks colour, texture, smell – but by putting it to use.

“Has no privacy,” he writes, of a radio; “you can read its mind.” Everywhere in the collection, there is blare – be it the radio, with its “hiss of multicoloured noise,” the “pinging, relentless cough” of the dishwasher, the “mad roar” of the vacuum cleaner, or the “poltergeist shrieking” from within the kettle. Things are plugged in, oscillating; the collection is awake, whirring, and, for all its tidy, metric metaphors, marked by sound and dynamism.

Pollock prioritizes the thing – its name, energy, sounds, utility – while allowing the image, and preoccupations, of the speaker to emerge in the margins. For Pollock, simple tools and everyday technological objects seem to be of special interest, ones that have replaced or advanced manual household tasks, like dishwashers, screws, flashlights, coffee grinders, and sprinklers. And though the speaker is kept out of the reader’s field of vision, the speaker is there, standing by and activating these objects, mining them for ontological meaning, and finding it everywhere. In “Refrigerator:” the speaker notices

a light comes on
and reveals the truth: some things are going rotten,
some are running low, and some are gone.

And later, a flashlight

understands its role is
to propagate some light into the world.

Though vastly different, Durable Goods recalls the early modernist work Tender Buttons, a collection of experimental prose poems by Gertrude Stein that explores the tensions between consciousness, language, and household objects. Pollock seems similarly intrigued by the immersive, slippery encounters between people and things, and, like Stein, forces objects out of their everyday routine and into a strange, uncanny light. Stein, too, writes of a book: “Book was there, it was there. Book was there.” Where Stein is opaque, sensory, repetitive, and diverting, Pollock lunges into clarity, neatness, and the kind of structural wit that is most at home in formalist poetry:

Book remembers living in the wood,
roots in the earth, wet boughs in the sky.

Pollock’s poems are metrical, lyrical, and decidedly accessible, wrought carefully into quatrains with alternating rhymes. With clever wordplay, objects are anthropomorphized, assigned gaping mouths, knowing eyes, backbones, memories, desires, and, in this way, brought into the fold of the speaker’s existential questioning – the ultrasonic humidifier,

singing O so high (does she sing
or is this screaming?)

The final poem, “Wind Turbine,” stands out among the rest, appearing almost as an envoi to the book. The wind turbine is the first object that appears out of reach, and one of the only objects in the collection that does not belong to the speaker. The distant object, “the world’s most graceful/ stick man,” cannot be touched or manipulated by the speaker. Pollock writes,

A tall poet breathing the Muse,
he transforms the windstorm into power’s

currency, which cools the air in which I write.

The energy moving through the collection is accounted for, wondered about, and rehomed in the simple turbine. There is a progression here, a sudden accruing of knowledge, and a widening of scope.

It has been a pleasure to read these poems in the pages of magazines, where many of them have been previously published. But, the real achievement of Durable Goods is as a collection, a “Book” – together, these pocket poems reveal an expansive meditation on tools we have for meaning-making.mRb