Eaten Back to Life

A review of Eaten Back to Life by Jonah Campbell

The title is as good a place to start as any. It’s taken, we’re told, from Cannibal Corpse’s debut album, its cover depicting a zombie devouring its own flesh. The metaphor acts as a reminder that “food, like life, is but another ever-twisting hole down which you descend, chasing some sense of satisfaction. You never truly reach the end; you just run out.”

This playful nihilism roots Jonah Campbell’s writing in Eaten Back to Life, a collection of forty-four short essays, each a rambling meditation on food, booze, and philosophy. It’s the follow-up to 2012’s Food and Trembling, also from Invisible Publishing, and both volumes cull pieces from Campbell’s long-running blog, Still Crapulent After All These Years.

Campbell’s publishers cast him as the Hunter S. Thompson of food writing, and they’re not wrong – he shares Thompson’s muscular perceptiveness and irreverent humour, and he unfailingly puts his experience front and centre, framing each mouthful as some wild adventure. Unlike Thompson, though, he slips frequently into quiet historical asides and philosophical tangents, referencing Levinas alongside sea urchins or speculating whether Deleuze and Henry James influence how we parse Toffee Crisps. 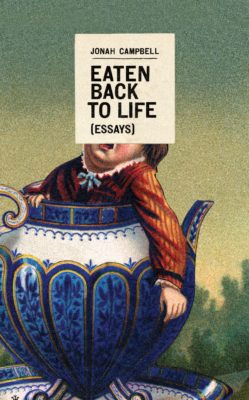 Eaten Back to Life
Jonah Campbell

This high-low flux drives Campbell’s analysis, producing essays that careen between etymological digging, critical theory, food writing, and party- heavy travelogues laced with well-read swagger. And they’re funny. Much of his work reads like a conversation, because it is – Campbell riffs on what he’s reading (which is a lot), crystallizing his response to X phenomenon by triangulating between his interests as a writer, a reader, an academic, and an autodidact sommelier.

The first essay in the collection, “A Bag of Assholes,” is an effective signpost for what’s in store: It opens with Campbell in summertime Paris, detailing the genesis of the French term cave à manger as he visits one. He orders andouillette, a pungent Lyonnaise sausage stuffed with a pig’s lower entrails (hence the essay title), that he describes as tasting like “butts, unmistakably.” His simultaneous appreciation and revulsion then leads him into an expedited meditation on the solipsism of taste.

Campbell clearly revels in these kinds of bizarre juxtapositions and associative slides, a tactic that can lead, in a single essay, from a respectful consideration of Nigella Lawson wearing salted caramel to a discussion of Bill C-36, or from BBQ chips to Ferran Adrià to David Cronenberg. In part, he’s enamoured with referentiality as an end in itself, but mainly, he’s interested in using food writing to weigh in on how we consume, more broadly.

While Campbell invokes individual foods – a holiday bouillabaisse, an oversized Reese’s Peanut Butter Cup, a particularly fine Calvados – as a launch pad for reflection, he resists the food writer’s cliché of treating dishes as an anchor for nostalgia (one he addresses head-on in “His Measure of Her Powers”). Instead, he approaches food and drink, indeed, the sensory experience of life itself, as texts to be dissected and consumed.

As a writer, Campbell is very much a man of his time, with a voice thoroughly steeped in the blogosphere that comes off at times as a little mannered or self-indulgent. That said, he is a careful author who is aware of his cultural privilege, and this unabashedly erudite collection is frank and funny enough to tease out nuggets of existential wisdom between spoonfuls of pozole and sips of natural wine.

Eaten Back to Life distills an omnivorous appetite and intellect into easily digestible bites, offering crisp observations about cuisine and food writing that make this collection a must for the reader who likes to play with their food, conceptually, as well as eat it. mRb