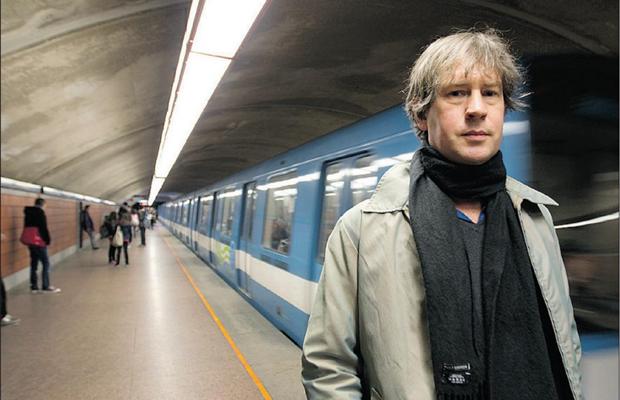 Most of Taras Grescoe’s writing is predicated on two things: travelling and being an outsider. In The End of Elsewhere, he looked at mass tourism; for The Devil’s Picnic, he imbibed the world’s illicit foods and substances; and in Bottomfeeder, he hitched countless boats to look for fish that was ethically and sustainably obtained. Even Sacré Blues, his first book, sadly out of print, falls into that pattern: he was a new Montrealer explaining the mystery of Quebec to the world.

For Straphanger Grescoe did the dirty work that too many of us in North America shun: he rode urban buses, subways, and trains in a dozen countries around the world. After travelling from Shanghai to Los Angeles, Philadelphia to Moscow, Bogotá to Copenhagen, Grescoe gives us a book that is a dense yet highly readable blend of copious research, historical and political anecdotes, and on-the-street experiences.

I recently caught up with Grescoe and chatted about the joys and stresses of taking the bus. 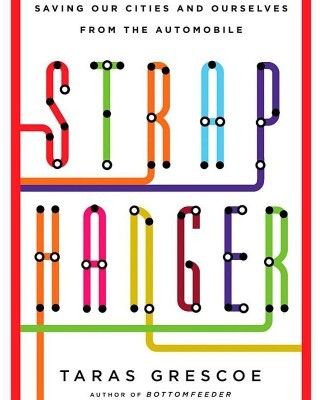 Straphanger
Saving Our Cities and Ourselves from the Automobile
Taras Grecoe

Leila Marshy: Would you say you are motivated by the search for a better world? Or are you simply holding up a mirror to the crazy one we’re in right now?
Taras Grescoe: I suppose I’ve become a bit of a meliorist, in the Jamesian (William) tradition. My first three books were more journalistic explorations of places and ideas (uniqueness of Quebec, impact of mass tourism, craziness of prohibition), but I no longer think it’s enough to simply portray something in the name of exploring it or exposing it. Screeds and diatribes have their place, but I want the people who read my books to see the good as well as the bad, and emerge with some hope for the future.

LM: Most of what you write comes across as a fairly even-handed account of what works and doesn’t work for mass transit in such cities as Tokyo, Paris, Bogotá, and Toronto – to name only a few. But I sense a real disdain at the mention of a few choice names: Robert Moses, Le Corbusier, Rob Ford. You call Frank Lloyd Wright a “pygmy” of a man, for example. Why so hot and bothered?
TG: I grew up on the West Coast with the architecture of brutalism, feeling my spirit crushed by the geometry of those soaring straight lines that look so good on the drafting table, but turn out to be so sterile when you actually have to live with the concrete. I don’t think anybody should be shocked at the disdain in Straphanger for Rob Ford – he’s a true anti-visionary – but I suppose my attitude towards Wright might surprise. I’ve read his autobiography and several biographies of the man, and I’ll acknowledge that he was an American original. But he was also an arrogant self-aggrandizer and a philandering fop with a serious deficit of compassion. A giant of geometry, perhaps, but a pygmy of the soul. His Broadacre City fantasies reveal how little he understood of cities, and of people.

LM: The city that probably comes out looking the worst is Phoenix. It didn’t just fall on hard times or fail haphazardly; it seemed to be set up for failure from the get-go. Explain the dystopia of Phoenix, Arizona.
TG: A post-war city structured around freeways, with no historic centre, whose growth coincided with the golden era of the automobile. Built by the Southern California growth machine, and filled with tax-fleeing refugees. A mirage in the desert kept going by air conditioning, threatened by the ever-diminishing water level of the Hoover Dam. (And now picked over by Canadian vultures hoping to make a quick buck!)

LM: A notion that you return to throughout the book is the correlation between rubbing shoulders with fellow citizens in mass transit and having a healthier, happier city. What is it about sharing space with each other that points to the future of how we should be living?
TG: Civilization and civility (even etymologically) are products of city living. The privatization of public space has been one of the nastiest results of car-centered living: security-patrolled malls (instead of shopping streets), multiplex cinemas (instead of street-facing theatres such as Montreal’s Rialto and Vancouver’s Vogue).

LM: I laughed at the loopy tactics of Antanas Mockus, mayor of Bogotá, Columbia. To improve “citizen culture” he installed mimes as traffic cops, melted down weapons into baby spoons, and symbolically inoculated residents with sugar water in order to make them sweeter. Why don’t we see more such urban theatre? Why can’t cities be more fun?
TG: Bogotá is its own world, but I think we have lots of fun in Montreal. Look at the outbreak of pot banging, a spontaneous Facebook-mediated adoption of cacerolazo, and revival of the charivari. And what about Luc Ferrandez, who campaigned carrying bottles of rosé and a projector on the back of his bike in his successful campaign to become mayor of the Plateau?

LM: You see a correlation between the 1956 signing of the Federal-Aid Highway Act in the US and the 1960s race riots. How are they related?
TG: The Highway Act brought interstates to cities, and the urban freeways were almost always routed through the poorest neighbourhoods. Detroit’s Black Bottom, Miami’s Overtown, New Orleans’s Claiborne Avenue were all crushed by overpasses. The riots in Detroit, and the immolation of the South Bronx, all took place in the ruins of neighbourhoods razed in the name of more convenient access to the suburbs. Fortunately, “middle-class obstructionists” like Jane Jacobs protested the destruction of Greenwich Village and other neighbourhoods, inspiring a movement that saved Vancouver’s Chinatown, San Francisco’s Golden Gate Park, the historic centre of Boston, and many other cities. Of course, you can’t always blame freeways: Montreal’s Faubourg à m’lasse, a thriving working class ‘hood, was paved over to make room for the parking lot of Radio-Canada.

LM: You repeatedly and successfully skewer the myth that mass transit is subsidized by the public purse while the road system is reflective of our free market economy. Why is this myth so enduring and powerful? How has it harmed urban development?
TG: “Our free market economy”? Not sure if that exists. As for the myths, all the propaganda of car culture, every Ford F-150 advertisement, powerfully equates the automobile with freedom. Of course, GM is now partly owned by the US Treasury Department, as are North American freeways.

LM: In your chapter on Toronto you say that the one single predictor of who voted for Rob Ford was car ownership. Do car owners make for bad citizens and bad governments? Was Jack Layton on a bicycle a predictor of how great a Prime Minister he could have been?
TG: One thing’s pretty sure: any straphanging or bike-riding politician who actually uses a bike or public transit on a regular basis is making a powerful statement about his or her relationship to the city. I’m talking about your Michael Bloombergs (rides the Lexington line in New York City) and Ken Livingstones (London mayor who rode the Tube) and Antonio Villaraigosas (the LA Mayor who has become a cycle advocate after being knocked off his bike by a taxi driver). Meanwhile, the Conservatives in Ottawa who are paying their drivers tens of thousands in overtime and leaving their limos idling outside Parliament are making their own kind of powerful statement about their estrangement from the city they live and work in.

LM: Your chapter on Montreal is brief and mostly extols the street-level culture, mass transit, and amenities of the Plateau and Outremont. What could Montreal do better? Is there political or citizen will for it?
TG: Montreal does the little things (Bixi, street festivals) really well, but is hopeless at the big things (highway infrastructure, metro expansion). This city needs to build more metro, it could use a couple of tramway lines, some real bus rapid transit, permanent Scandinavian-style bike lanes, and an all-day, all-week suburban rail that operates like Paris’s RER rather than a peak-period commuter rail. (I’d like to see an airport train too…) The political and citizen will is there, but not the money. Canada is the only G8 country without a federal transit strategy or a reliable stream of money to support one.

Leila Marshy has more to say on Straphanger in our paper issue, coming out on July 21. Stay tuned!