The Armageddon of Thought

A review of Explosions by Mathieu Poulin

If you’re anything like me, Michael Bay movies (the Transformers film series, Armageddon, Bad Boys) happen to you because of an accident of circumstance, as a whim on an interminable transatlantic flight, or the cinematic aspirations of a niece or nephew on a family babysitting expedition. We don’t watch a Michael Bay film for nuance, or artfully composed cinematography, so much as to be bludgeoned over the head with relentless action sequences and the most well-trodden tropes the Hollywood blockbuster machine has to offer.

But what if Michael Bay is really a misunderstood genius? An artist, critically misinterpreted, academically ignored, deprived of his true vision because of the manipulation of the studios in the name of outrageous commercial profits? Or what if he’s part of something much deeper and even more mysterious, something beyond the scope of mass media, something that’s shaped both civilization and his very consciousness from childhood? These are the kinds of heady, ridiculous questions Mathieu Poulin detonates consistently throughout the course of his novel Explosions: Michael Bay and the Pyrotechnics of the Imagination. 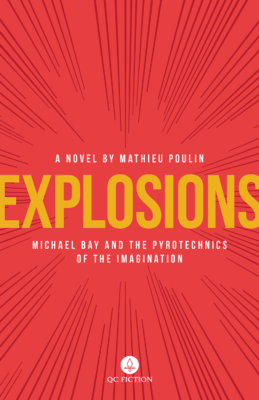 Part biography, part novel, part philosophical treatise, and part Michael Bay movie, Poulin’s work brings to mind another Québécois writer in English translation – Bertrand Laverdure (Readopolis, Universal Bureau of Copyrights). Both authors have a way of blending realism, intellectualism, and the fantastical in absurd and entertaining ways. In Explosions, Michael Bay, who is the character Michael Bay, and also the “real” Michael Bay, who somehow happens to be living in the reality of his films, is on a lifelong philosophical quest for meaning. His most innocuous moments shift instantly into big-budget pyrotechnics.

At times, the mania falls into a sort of hypnotic dream logic, where Michael Bay can ruminate for pages on street art and his creative struggles with the studio while his yellow Ferrari soars airborne in a back alley thanks to the quick thinking of Nicolas Cage on a dirt bike dropping a pallet from a nearby rooftop. Yeah, it is that utterly, unapologetically over the top. However, for Michael Bay, explosions aren’t mind-numbing and meaningless, but a source of mystical insight, and a key to unshrouding the mystery of his beginnings as an adopted child. As Neil deGrasse Tyson – one of the few characters who truly understands Michael Bay’s genius – so eloquently puts it on the set of Armageddon: “If God exists, God is an explosion.”

Though there is no shortage of chase scenes, kidnappings, assassination attempts, and Hollywood cameos, Explosions has more to offer than an off-the-shelf Michael Bay flick. Non-chronological narrative threads engage the reader in media res, finding coherence as the novel develops. The book’s central love interest, Daphné Couture, defies the leading lady stereotype by both being smarter than Michael Bay and refusing to succumb to his solipsistic charms. Poulin manages to simultaneously satirize the artistic ego, soulless commercial mega-pictures, and the tradition of androcentric philosophical discourse without ever coming across as heavy-handed or didactic. And Aleshia Jensen’s translation, while maintaining the high-velocity trajectory of the prose, is nuanced in all the right places. On top of this, Explosions is consistently funny, offering one-liners like, “Michael grabbed his pistol, the American version of a Swiss army knife,” as well as a hilarious answer to the question of what Meatloaf won’t do in his 1993 hit “I’d Do Anything for Love (But I Won’t Do That).”

Poulin’s kaleidoscope of high and lowbrow culture may not appeal to every reader. But for those who choose to strap on some plastic explosives and rappel down its cliff of mayhem, there is much to admire before the final blast of insight. mRb