A review of Fauna by Christiane Vadnais

In the past decade, climate fiction has become a frighteningly relevant literary genre, with an increasing number of authors exploring the potentially apocalyptic consequences of climate change. In Fauna, first-time author Christiane Vadnais offers us ten interwoven tales about a world ravaged by pollution and floods, populated by strange nocturnal creatures and metamorphic parasites.

The first thing that struck me about Vadnais’s work was the language. Translated into English by Pablo Strauss, Fauna paints a lush and dreamy landscape, but with a touch of the grotesque. Scientific terms and Latin names are threaded into sumptuous descriptions. One of Vadnais’s recurring characters, Laura, is a biologist who sees living things in their most visceral form, and her vignettes gave me horror-story shivers: “That plump fleshy mouth like a badly healed wound, this carnassial dentition – neither has been seen before.” As a translation, Fauna reads easily and captures the lyrical, organic flow of the French. While I tend to prefer concision and simplicity in English writing, Strauss won me over with gorgeous lines like this:

Laura wonders if the workers and adventurers and locals ever really get used to the dark and the isolation, the inhuman scale of the elements that life clings to like a speck of dust, or the disordered flow of time, which seems at once arrested and infinite, fugacious as a beetle. 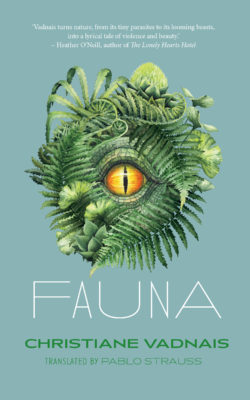 Wildness is a recurring theme in Fauna. Vadnais examines the dichotomies of the natural world: predator and prey, pleasure and need, instinct and intent. Living things are either devouring or being devoured: “Hunger steals over Heather much the way pins and needles harrow the phantom limbs of amputees; it’s a deeply felt, material wanting, an absence, a raging desire that cannot be slaked.” With every page, the line that separates humans from the natural world is gradually smudged out, obscured by mist and fog. Vadnais takes a hard look at the animal that lurks inside all of us, and as the stories unfold, we see it emerge – in feathers, scales, and webbed skin. Most of the characters in these tales are women, and Fauna has a distinct female aura. Fertility and motherhood are explored through various characters and in different forms. Water, the moon, and lunar cycles are recurring symbols in the collection: “She appears when the lights go out in cottage windows and the moon’s rays expose the moths crouching on beds of leaves.” While the stories often focus on these women’s physical metamorphoses, their psychology is not overlooked. Laura’s struggle as a single mother and dogged commitment to her research give her story more weight, and even minor characters have their own internal conflicts. Heather, who seems to embody wildness itself, feels deeply human despite her feral habits. These fleshed-out characters ground us in the universe and guide us along its strange, moon-lit path.

Despite the fantastic events that occur, the stories in Fauna feel less like fiction and more like twisted reflections of our world. Polluted waters, ravaging floods, and a deadly contagion are all terrible realities that people across the globe are facing today. But even with the stories’ grim premise, they never turn cynical. Instead of portending doom, Vadnais’s words sound like a rallying cry: “To dream of a future where our species survives, we must get back to wilder times.” In the final story’s powerful ending, I heard the author’s desperate call for change. And as climate fictions like Fauna continue to hit bookshelves, I hope the world will listen. mRb