A review of Fayne by Ann-Marie MacDonald

What is light? Particle, wave – or both? Such questions preoccupy the Honourable Charlotte Bell, ahead of her time in the late nineteenth century. Insatiably curious, Charlotte is entering adolescence at Fayne, a remote estate comprised of thousands of acres of mysterious moorland, “situated on the southern border of Scotland – or the northern border of England, as the case may be.” This bewitching land – which is at once two lands – foreshadows Charlotte’s awakening towards her own identity.

Weighing in at 736 pages, Fayne, Ann-Marie MacDonald’s magnificent fourth novel, is a hefty read, yet never does it feel too long. Here, the best-selling author skillfully marries the mystical with the scientific, her nature-honouring opus illuminated with flashes of humour.  She explores timeless themes like loyalty and betrayal within love and friendship, while addressing issues of gender and sex with great depth and sensitivity. At the centre of it all, amid scenery fit for a fairytale, lively Charlotte holds readers rapt as she untangles family secrets coiled at the heart of intergenerational wounds. 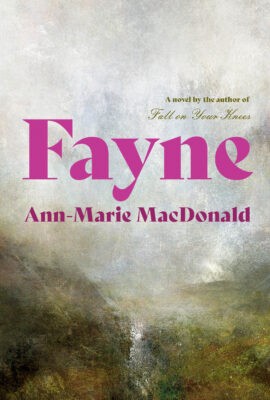 Isolated from society due to an unnamed condition, Charlotte connects deeply with the moor, named “Fenn,” and attunes to Nature’s nuances and diverse designs. In April, she sees Fenn “laid out in mighty swells of emerald and dun, creased in dark brown, spumed in yellow.” The moor is at once a wise healer rich in natural medicine, and a treacherous trickster with underlying “swallets” that swallow the unsuspecting; it’s an otherworldly land alive with “Wee Folk,” according to Fayne’s elder servants: “Dinnae lock eyes with a wild hare lest he carry the sight of you to Faery,” warns nurse Knoxy. Thanks to Byrn,“the old man-of-all-work,” Charlotte is initiated to the “Auld Ways,” learning songs that harmonize with the divine wild.

In her mother’s absence, gifted Charlotte is lovingly home-schooled by her gentlemanly father, Lord Henry. Yet, she’s already asking questions outside his wheelhouse. “What is colour?” she inquires, hungry for scientific details. When she begs to be sent to school, the protective baron hires a home tutor, Mr. Margalo, who can’t help but doubt his feisty new student’s “condition.” Intrepid Charlotte rejects prevailing norms and aspires to become a physician in an era unkind to women scholars. She’s also intrigued by emerging research in physics that hints at wave-particle duality, a compelling paradox that matches her intuitions about the nature of reality: “Mr. Margalo, in this world of scientific wonders,” she suggests, “might we not one day discover that two opposite states might indeed coexist?”

The young protagonist’s first friend, Gwendolyn, provides another window to the outside world. Meanwhile, Charlotte’s inner sight progressively sharpens. In dreams, clues crop up around the suspicious deaths of her mother and brother.

As the narrative shifts back and forth in time, the reader enjoys a rainbow of viewpoints, experiencing the family’s drama through Charlotte’s mother, father, aunt, and others. This colourful tapestry, interwoven with fortune, tragedy, and empathy, provides the backdrop for Charlotte’s struggle to transcend oppressive cultural conditioning and protect a body that diverges from society’s cookie-cutter standards. This personal fight is echoed by a more universal challenge when industry threatens to encroach on Fenn, a moorland that embodies an increasingly rare wilderness, still rich with the very biodiversity upon which human life depends.

“Let us cherish the mud, and cultivate compassion for the stars,” invites Charlotte, by now equally plugged into subtle energies and the material world, and wise to our species’ tragic knack for destruction. In a moving and poetic finale, the unforgettable Fayne slips beneath one’s skin like an electric enchantment. Smudged with mud and marsh sprite dust, this reader turned the final pages wired in awe, keenly aware of our impermanence – strung with infinity’s fairy lights.mRb