A review of First Spring Grass Fire by Rae Spoon

Rae Spoon’s debut short story collection First Spring Grass Fire weaves together a number of interesting threads that are rarely seen in relation to one another, though they often should be: coming of age, coming out, gender, evangelical Christianity, place, recognizing an artistic avocation, family dynamics, and mental illness to name a few. I say they probably should be, of course, because human life is rich and multi-faceted and our literature should be no less so. Needless to say then, so complex a palette is all to the good. What is at least equally good is that the stories in which they come together are sharply focused and direct; each of them is a snapshot of a particular moment and experience in a young person’s life.

The memorably titled “Sasquatch in My Shower” explores the relationship between fear and self-doubt using the lens of the eponymous monster and a family’s “pro-life” work with pregnant young women. In it, the narrator’s friendship with one of the women prompts them1 to ask questions that both drive away their terror of monsters and begin to break down an uncritical faith. The story “Second Coming,” on the other hand, captures an episode in which religious beliefs about an imminent apocalypse become literalized and fill everyday life with a “thick layer of foreboding.” The picture here is powerfully painted with quick strokes, short sentences and flashes of insight that, at their best, are compelling. In fact, First Spring Grass Fire’s strengths lie in this economy and its ability to make connections between what initially seems like divergent areas of experience. 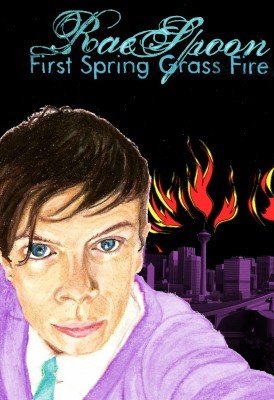 Its weaknesses, not unusual in a first book, are found in some areas of craft. Although the writing program dictum of “show, don’t tell” should not be taken as gospel, it should also not be too readily tossed aside, as parts of this collection do with an unfortunate insouciance. Lines like “Kurt Cobain was the personification of the rage I felt,” or “When my father grounded me for months for defying him, he let me keep my guitar; hiding in my room, I felt like it was all I needed to survive,” both from the story “Music Saves,” are so flatly declarative, not to mention dangerously close to cliché, that they create psychological slightness in the characterization and flatten out affect. In some cases, a paragraph will tie together several such declarative statements, as in this example:

I can go back to those moments and remember how complete I felt. She was the first person that I ever felt safe to be myself around. It gave me hope that I could construct something secure and new for myself. It gave me a reason to work out the ugliness inside me.

Although this construction clearly works towards minimalism of a sort (and the repetition of several declarative sentences does enjoy the benefit of a curious rhythmic effect), its reliance on generalized observation rather than sensory or psychological detail leaves it without the texture that grants readers emotional access.

Of course, some readers will find the account itself sufficient to involve them. They will be willing to follow this remarkably resilient young person’s voyage to self-affirmation; there is insight, incident, and courage enough in the account. For others, however, the fact that so much has merely been explained to them will leave them wanting to be let in, wanting to see, hear, and feel the challenging connections they can sense – just below the surface.  mRb