A review of Fools Rule by William Marsden 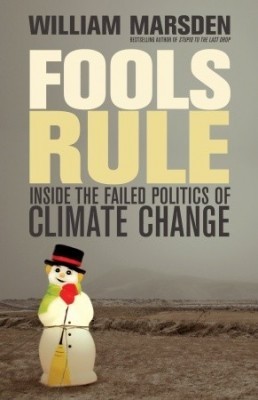 There is something comical in journalist William Marsden’s description of the 2009 Copenhagen summit. In the opening chapters of , he unpacks the proceedings of the two-week conference and lays out an absurdist labyrinth of greed, mistrust, and simple bureaucratic idiocy. Marsden describes Copenhagen as “a clumsy tango of often half-hearted participants” in a “dance marathon” who “stagger about the floor inching forward, wavering and retreating.” But, the author’s charming and often humorous narrative approach aside, it is tremendously disheartening to realize that, as a breathless world looked on, infused with all the hope and urgency of change, the eminent leaders of the world met behind closed doors and bumbled like an awkward high-school student union.

Marsden’s central argument that there exists a fundamental disconnect between politics and nature leaves little room for hope. He explicitly critiques the local, bottom-up approach advocated by some environmentalists (like Holly Dressel and David Suzuki in More Good News), and argues that top-down decisions in the political spectrum rapidly wipe out any small gains that are made. It’s a bleak landscape he paints: the United States, half-heartedly present at international conferences and choked by its own Senate; China, insistent on securing compromise from the United States before moving forward; India, the fast-growing CO2 producer on earth, bent on putting every citizen in a car; Canada, money-hungry and overpowered by a Conservative political agenda. Countries are personified in Marsden’s account, and they rail at one another with the same insecurities and uncertainties as individuals, their actions ringing with the insolence and entitlement of children.

Fools Rule balances this political perspective with a scientific account of global warming deeply informed by Marsden’s personal experience. He describes travelling into the Arctic and lays out the science of glaciology and ice age cycles. He struggles to extricate information from scientists muzzled by the government – many of whom are discouraged, financially stifled, and pessimistic about the future – and presents a terrifying portrayal of melting ice caps and rising CO2 levels. He explains the dangers of methyl mercury latent in the Arctic and how warmer temperatures could ultimately poison our oceans. It is refreshing to have the science presented from a journalist’s perspective, accessible, yet not oversimplified; and more so to have presented why the possibility of a decisive proof of global warming is so problematic from a scientific standpoint.

Peppering this 300-page political and scientific study, Marsden’s narrative intrusions are occasionally strange, (a page-long description of an aging woman on a flight to Cancun is particularly jarring), but they help break up denser passages and lighten the urgent tone of the book. The trouble is that Marsden struggles to end on a note of optimism after effectively tearing apart all hope. It seems to be a trope of many environmental studies to end this way, tying up hundreds of pages of bleak forecasts with sudden and brief parenthetical hope for the future.

“Stupidity breeds unbridled confidence,” Marsden explains in the closing chapter. There is deep-seated psychology behind the political behaviours he describes, and there appears to be little way around them. The politicians with the least scientific knowledge are the most emphatic and sure of themselves. While Marsden advocates putting important international decisions in the hands of an assembly of experts – engineers, scientists, economists, technicians, and others – to create a global action plan, it seems painfully unlikely given the power struggles his books takes pains to showcase. As a journalist with decades of expe- rience and a number of titles to his name, Marsden might have explored in greater detail the nuances of the solution he suggests.

Amidst the warming temperatures, melting glaciers, and rising sea levels, perhaps that is the most uncomfortable thought of all – that even as humanity has struggled to create a sustainable and livable future, our collective human psychology has deadened any hope of real progress. mRb