For Want of a Fir Tree

Frédérick Lavoie’s For Want of a Fir Tree: Ukraine Undone, translated by Donald Winkler, provides a portrait of Ukraine in the pivotal months surrounding the unseating of President Viktor Yanukovych and the subsequent division of Ukraine into a pro-Europe west and a pro-Russia east. Russia’s annexation of Crimea in March 2014 led to outright war between Russian separatist forces (a combination of Ukrainian rebels and imported Russian troops) in the Donbas region and the Ukrainian government. In the early days of 2014, Lavoie, a professional journalist, travelled to Ukraine to try to understand what he calls an absurd war.

The book lands in the world of English letters somewhat between genres. It combines journalistic writing with reflections on the profession and essayistic passages, and employs a favourite trope of French letters, the second-person address. Here it is delivered with a macabre twist: Lavoie addresses the book to a four-year-old boy who was killed in the early months of2014 by an errant rocket. “You’re collateral damage, Artyom,” Lavoie writes. “Nothing more, nothing less. No one wanted your death, but you died anyway. You must be asking yourself why. You were just the right age for ‘whys.’” 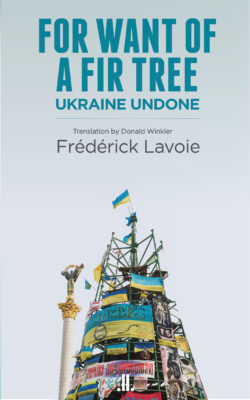 Artyom becomes, therefore, an organizing principle of the book. His is a death foretold, and we are reminded of that frequently in a structure more fitting for a murder mystery than a journalistic exploration of the meaninglessness of war. In a murder mystery, repeated reference to a coming death would build suspense. In For Want of a Fir Tree, such references instead land as pithy and sometimes platitudinous comments: “Sadly, Tyoma, in great moments, people often show themselves to be very small,” or “Tyomchik […] as of the moment that the war settles in, your days are numbered.” Highlighting Artyom in this way lends his death a significance the book otherwise means to refuse. Lavoie’s larger point is that there is no logic to his death; to give it one within the structure of the book gives us a climax in a climax-less story.

Similarly disorienting is Lavoie’s claim that “I am not a war reporter. […] War repels me. I do not want to have anything to do with this romantic aura that surrounds those who cover destruction and death.” Despite this, we watch him go deeper and deeper into conflict zones where the risks couldn’t be more apparent. In a hotel, he gathers with his colleagues: “We drink, we laugh, we dance […] to live as best we can.” He would like to be different than them, different from the one he calls a vulture: “Every morning on waking, the vulture hopes for others’ deaths. He hopes for an explosion, bodies strewing the ground.” Yet the vulture led Lavoie to Artyom. Aware of the contradiction, Lavoie admits, “As with him, tragedies earn me money.” Speaking to the child, Lavoie writes, “I’ll write your story. I won’t mourn you. You’re not my drama.”

Ultimately, these contradictions led to me not trusting Lavoie. It’s too bad, because his journalism demonstrates a precision and decisiveness that gets lost in the format of a longer book. Many moments are well observed and illustrative of his instinct to see war not in its gory details, but elsewhere – in a history museum, in a café talking with revolutionaries, at the last check- point before no man’s land. And Lavoie’s questions are compelling – least of all, how does a country that has been habituated to peace suddenly come to war? For Want of a Fir Tree may not work for the reasons above, but it gives every reason to be excited for whatever Lavoie writes next. mRb