“Once we regarded traffic as a purely technical problem,” said Mauro Formaglini, Bologna’s Traffic Counsellor in the early 1970s. “We have now realized that every traffic question has a political side too.”

In 1972, Bologna was bursting with automobiles: second only to Turin, the city had one car for every two and a half residents. Each day, 200,000 cars flooded the city’s downtown. Two years later, that number had dropped by 25 percent. In the same period, public transit usage increased by 50 percent. After an extensive, decentralized democratic planning process, Bologna’s city council, relying on the support of a coalition of left-wing and communist members, had begun a program that provided free public transit during morning and evening rush hours and extremely low fares at other times of day.

Bologna’s success is just one of several interesting stories in Judith Dellheim and Jason Prince’s engaging, if at times frustrating, Free Public Transit: And Why We Don’t Pay to Ride Elevators. The chapters, written by academics, journalists, and activists, delve into the “political side” of the question of how best to address the mobility needs of a city.

Three opening chapters set the context for the case studies and activist accounts that follow. Wojciech Kębłowski establishes that free public transport, defined as systems where transport is free for most users, on most routes, most of the time, is already a reality in at least ninety-seven cities across the world. Jan Scheurer looks at new technologies, including driverless cars, which may radically reshape how people move through the city. Judith Dellheim reviews the political economy of transportation. 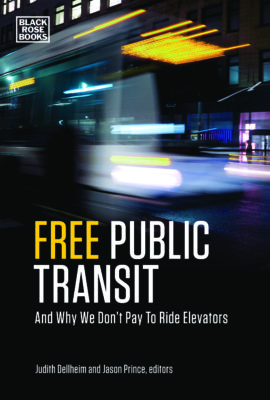 These short chapters are the weakest among the collection. Kębłowski’s, at three and a half pages, is too quick a summary. Scheurer takes a surprisingly optimistic (one could say uncritical) view of how automobile automation would play out, downplaying its potential for increasing gridlock. Dellheim writes that “the issue of (free) public transport cannot be separated from the broader issues of social inequality, [and] structures of production and consumption.” Unfortunately, her deluge of statistics about pollution, automotive manufacturer profits, and natural resource exploitation read more like a laundry list of capitalists’ crimes than building blocks for a compelling argument. Her piece would have benefitted from more space.

Montreal students began jumping turnstiles to disrupt the transit system in defiance of the fare hike. The same tactic was adopted by Planka.nu (whose name roughly translates to fare-dodge.now), a Stockholm-based grassroots organization profiled by Anna Nygård. The activist group, which rallies around a strident critique of neo-liberal economic policies, was formed in response to transit fare increases in 2001. Free Public Transit also includes illuminating discussion of wider movements, such as Right to the City in Mexico, who include mobility rights and fare-free public transportation in their platforms.

But who pays, if not the bus rider or metro user? Jan Scheurer answers both this question and the one embedded in the title with her final chapter, “Value Capture: Linking Public Transport to Land Value.” We don’t pay to ride elevators in shopping malls; the building owners do, because they are the ones who benefit from our business. In the same way, argues Scheurer, a well-connected transit system “increases the value of [land] parcels … – and perhaps principally – benefits the owners of land in the city.” Scheurer makes a convincing case for further investigation by policy makers and activists of a “betterment tax” charged to land owners to finance public transit in perpetuity, calculated using comprehensive data on transit connectivity.

Free Public Transit is an intriguing, if too brief, snapshot of what a transit system that served the needs of everyone in the city could look like and how it could be realized. mRb