A review of Frenemy Nations by Mary Soderstrom

Welcome to the complicated intersection of geography and history. For as long as it has been politically expedient to do so, humans have been plopping down borders. Here is a state, we say, and there is another. The leap from national boundaries to ownership is short: this is mine, and this is yours. Some state lines follow landforms or bodies of water; many others are arbitrary, at least topographically.

This latest book from the prolific and thoughtful novelist and non-fiction writer Mary Soderstrom considers instances of imperfect cleavage. So-called frenemy nations, she writes, are separate states with “so much in common they might seem like unidentical twins.” Soderstrom was inspired by the memory of crossing into Canada with her husband in a Volkswagen Beetle in the late 1960s and the simultaneous of familiarity and dislocation between one home and the next. She considers ten pairs of countries or regions that are both intrinsically linked and yet different: North and South Vietnam; Algeria and Tunisia; Kerala and Tamil Nadu; Brazil and the rest of South America; Haiti and the Dominican Republic; Burundi and Rwanda; Scotland and Ireland; Vermont and New Hampshire; Alberta and Saskatchewan; and, of course, Canada and the States.

Frenemy Nations: Love and Hate Between Neighbo(u)ring States is not political; like most of Soderstrom’s non-fiction work, the book doesn’t have a particular message. This is not to say that her prose meanders, or that the book is without structure. Rather, she doesn’t seem to have anything to prove. The impulse seems to be curiosity – mere curiosity, powerful curiosity – and this intellectual saunter is among the book’s greatest strengths. Soderstrom is interesting because she is interested. 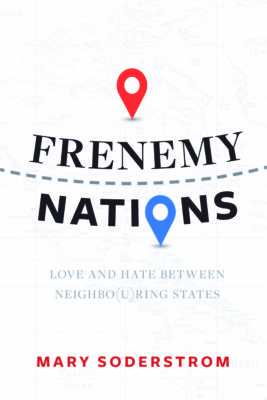 The book isn’t quite a history lesson either, though the facts gathered here, and their span, are impressive. In the section that examines the fusion and fissions between Portuguese- and Spanish-speaking South American countries, Soderstrom manages to get us from the Roman Empire to the colonial campaigns of the fifteenth and sixteenth centuries via Bolívar and back again, to Pope Francis, in less than five pages. Her frequent asides – musings on language, geology, genetics, twins, what have you – are sharp and illuminating, sparking reflection and lightening the informational load.

Nor is Frenemy Nations exactly a travelogue – though, for my money, I prefer the kind of guide Soderstrom aspires to be, who shows the good, the bad, and the ugly, rather than top-tenning at us from the second tier of an open-roofed red bus. Soderstrom invites us along as she herself discovers – even as that discovery sometimes reveals her own preconceptions. For instance, crossing back into the States one fall some years after emigrating to Montreal, Soderstrom confesses, “up until then I’d always considered New England more or less a single entity.” Ah, no, we learn with her as she dissects the area’s nuanced approaches to freedom, taxation, and electoral politics.

The writing itself is conversational, but faultless and tight. Not only will you be left with the impression that you’ve learned things, but you will wonder how on earth you managed to have these gaps in your general knowledge to begin with. From a research point of view, thorough notes, an extensive bibliography, and an index make this book academically valuable. Some sections are a bit heavier on the historical details than others (the Canada–US comparison, perhaps ironically, since this is the bit we should probably know best, is a bit dense at times).

But rare is the author who makes the process of reading seem like interlocution. Soderstrom’s approach to the often-messy material, rife with slavery, war, political machinations, and all the misdeeds of colonialism, is tactful, and she is aware of her privileged vantage without belabouring the point – though she, and her editors, might have more carefully considered Indigenous nomenclature and perspectives. Soderstrom inserts herself in a way that makes it seem natural that she’s telling us all this – never imposing. Come along, she seems to suggest as she explains why she wanted to write about Vietnam, mournfully compares Haiti after the earthquake to an earlier trip, recalls visiting New England to go to a fiddle music festival, and returns often to that first, seminal border crossing, Mary and the mister young and hopeful in the idealism-mobile. Hop in. mRb