From the Archives of Vidéo Populaire

Montreal artist and curator Anne Golden’s debut novel, From the Archives of Vidéo Populaire, is a remarkable depiction of the heady early years of video art in 1970s Montreal. Presented as an oral history of the fictional artist-run centre Vidéo Populaire (or VidPop) on the eve of its fortieth anniversary, the book interlaces the voices of the collective’s founding members with those of others who participated in the organization as it grew. Rich in authentic period detail, the book offers a welcome glimpse at a storied chapter in the history of Canadian art.

VidPop was founded amid the political volatility of the mid-1970s in Quebec. Video art, which was just emerging at the time, was embraced by the collective as a political tool, a radical anti-art consistent with their sovereigntist and Marxist values. At the same time, the artist-run centres that would transform the landscape of contemporary art in Canada were also in their formative years. Golden’s story is therefore set against a backdrop of radical possibility – politically, socially, and artistically. The generative nature of this ambiguity is a subtle refrain throughout the book: video technology was new and video art was being invented on the spot, collective organizing felt transformative and utopian goals realizable. The outcomes we now know in retrospect were not predetermined.

The novel explores how it felt to be an idealistic activist and artist in that moment and, just as importantly, what it means to reflect on that idealism from a distance of forty years. Golden’s approach is articulated by one of VidPop’s founders, Lydia Cartwright: “We were in it and couldn’t imagine anything else. I refuse to be condescending about us because we held beliefs that fell out of fashion.” The oral history format, which intertwines multiple, often conflicting, perspectives, allows Golden to offer a nostalgia-tinted account through the eyes of participants without ever becoming cloying. Instead, the novel always also reads as a commentary on the nature of memory and myth making. 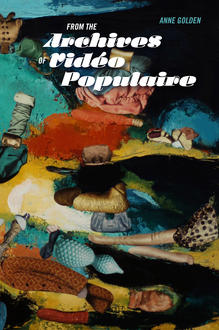 From the Archives of Vidéo Populaire
Anne Golden

From the Archives of Vidéo Populaire is not so much about the art that was produced by VidPop as it is about its personalities and relationships. Among the voices of three dozen supporting characters, readers encounter the collective’s four distinctive founders: Cartwright, the feminist; Maurice Aubert, the oddball auteur; Carl-Yves Dubé, the hot-headed revolutionary; and the peace maker, Terrence O’Meara. As time passes and the founding members leave VidPop, the oral history narrative nevertheless continues to circle back to the earliest years of the collective, as each character tries to make sense of their role in the various personal dramas that unfolded among them.

While the preoccupations of the characters remain somewhat fixed, Golden brilliantly signals the passage of time through the shifting topics of video projects: in the early 1980s, Cartwright begins making explicitly feminist works; in the late 1980s, VidPop members create Positive Montréal, a documentary about HIV/AIDS; in the final pages of the book, Dubé mentions his son recording “that whole great pot-banging spring” of 2012 on his phone. The sheer plausibility of the numerous video works Golden creates for her characters is among the great delights of the novel.

From the Archives of Vidéo Populaire is an extension of Golden’s 2007 video of the same name, which shares the book’s verisimilitude, depicting actors being interviewed as Aubert, Cartwright, Dubé, and O’Meara. The novel includes introductory text informing readers that the “book is the result of original interviews conducted by the author” and it concludes with short biographical notes on all thirty-eight characters. Throughout the book, references to real-world artists and videos that inspire the characters (Ant Farm’s Dirty Dishes, Martha Rosler’s Semiotics of the Kitchen), the precise details of shifting video technologies, and the geography of Montreal’s Plateau neighbourhood ground the story of VidPop in a pleasing and entertaining realism. Golden’s research and attention to detail are exceptional and the result is a captivating tour through a seminal period in Canadian art, reflecting on memory, collective idealism, and the politics of creativity.

Sara Spike, PhD, is a cultural historian of rural and coastal environments in Canada.