Revenge of the Nerds

A review of Getting a Life by Benjamin Woo

I come to Benjamin Woo’s book Getting a Life: The Social Worlds of Geek Culture not as a hostile observer of the culture he examines, but as a baffled one.

A sea change took place in 1977, and with hindsight I feel as if I witnessed it in real time. Attending an opening-weekend screening of Star Wars (don’t ask me how or why, I just sort of ended up there), a blunt-force realization struck roughly fifteen minutes in: most of the people around me were grown-ups. They weren’t there with their kids, if indeed they had any. They were there of their own volition, responding rapturously and without irony to a film aimed squarely at a certain fourteen-year-old male subset. Well, I was fourteen that year, and my favourite film was One Flew Over the Cuckoo’s Nest. I had never felt so alienated. What was going on here?

From that inflection point we find ourselves in a place where, on a typical day, if you’d like to go and see a movie that depicts recognizable human beings negotiating a world where the basic laws of time and space apply, you can’t, because the cinemas are block-booked with Batman v Superman or some equivalent escapist progeny of what Star Wars has wrought. If there ever really was a battle between the nerds/geeks and the “cool” people, the nerds/geeks won. The pop culture playing field is theirs. They’re not oppressed minorities fighting for safe spaces in the cracks of the mainstream. Collectively, they are the mainstream. 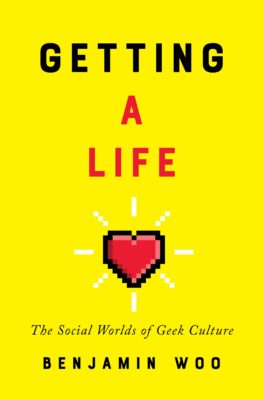 Getting a Life
The Social Worlds of Geek Culture
Benjamin Woo

Woo, an assistant professor at Carleton University and self-described former nerdy kid, is not overly concerned as to whether the geek takeover is a good thing. Rather, he adopts a judgment-free stance, arguing that the geeks comprise an identifiable type: always with us, they hid in plain sight until their network building went supernova with the advent of the internet and the limitless possibilities for connection opened up by social media.

One of Woo’s central aims is to debunk the myth of the maladjusted basement-dwelling loner and instead spotlight the community-building power of geek culture. Interviews with people across the spectrum – gamers, a comic-book store owner, a married couple brought together by shared specialized interests, convention attendees – certainly convey the sense of a milieu greater than the sum of its parts. Presented in an appendix, a set of participant profiles is arguably the strongest part of the book, and might have been better deployed in expanded form and integrated into the main text.

Thankfully, Woo resists a tendency often found in similar studies – that of adopting the argot of the subject, peppering the text with in-jokes and wink-wink references. He strikes just the right note between academic rigour and broader readability. And to his great credit, he doesn’t shy away from the subject’s murkier corners. A chapter titled “The Geek, the Bad and the Ugly” addresses the backlash of misogyny, homophobia, and racism coming from an entrenched segment of fandom that views any gesture toward inclusiveness as pernicious politicization – a contingent enabled in the public arena with the rise and election of Donald Trump.

“The ability to imagine [geek] subculture as a space of possibility and freedom is a privilege that is not equally distributed,” Woo nicely understates, though you can’t help but wish he’d delved deeper into the chicken-versus-egg question of whether it was two generations of reality-averse consumption that made Trump possible. But then, that would effectively be asking for a different book, which would be unfair. Within his remit, Woo has produced something close to definitive. Getting a Life is not a book for the geeks, it’s a book for the people who would like to understand them better, and now I do.

Just don’t expect to see me cosplaying Luke Skywalker at the next Comiccon. mRb