A review of Ghost Face by Greg Santos

Ghost Face is Greg Santos’ fourth book of poetry. I interpreted it as a loose narrative in verse, divided into three parts – “I/You,” “Saudade,” and “Ode to Joy.” It’s a story that begins with a pregnant teenage girl escaping the Khmer Rouge regime in Cambodia. It then follows her child, adopted by a family descended from Portuguese and Spanish immigrants, as he attempts to negotiate the complex cruelties and blessings of history, family, and identity.

Section one, “I/You,” was written during Santos’ time as a graduate at New York City’s New School, under the direction of poet and memoirist Honor Moore. The first nine poems (from “History” to “Juno”) function as a sort of Act One – a chorus, which give context for the poems that follow. Sparse and direct, their meaning is conferred as a collection, and as a consequence they cannot exist independently as individual poems. The poems are least successful when they give up writing’s inherent ability to body-snatch and world-make in favour of the kind of imagery better served by filmmaking.

In “Siem Reap, Cambodia,” the speaker’s teenage birthmother steals away from the “[w]arm, sticky air bathing the street market / comforting scent of fragrant rice / pungent odor of dry fish” and the “echoes of distant missiles” in the only home she has ever known. This is a rich set-up and our hero is a compelling one, stirring with courage and new life – and yet I feel like I am only allowed to glimpse her as a part of the scenery. 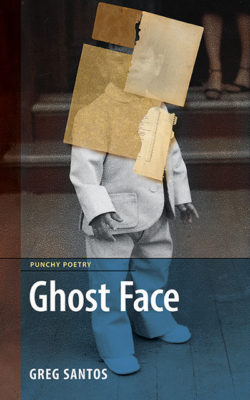 In the poem “Murky Memories,” we meet the baby speaker, with his adoptive family, and the writing comes alive. When the speaker says to a Cambodian blood relative, “we were born without memories. / I am writing our memories for us,” the book organizes itself together, and starts to build – all the way to a death, at the end of the “I/You” part. The poem “You Remember” is a masterful use of the second person to describe a speaker’s subjective experience, and the result is a kind of synecdoche for the ultimate gift of Ghost Face – which, I think, is empathy. When you, the reader, are “told by a disembodied voice” that your father is dead, the effect is that you feel the speaker’s loss like you’re remembering your own. “You remember having dreams about him afterwards,” even when the dreams are not yours. You hear your father tell you he’ll “fill you in on what heaven [is] like.” You don’t want him to leave. He does.

The second part, “Saudade,” named for an untranslatable Portuguese word about the material presence of loss in a state of grief, begins with “Dear Ghosts.” Santos writes after the closest thing English has to a concept like saudade – the spectral presence of “Father. / Tata. Nano. Vovo. Chico. My grandparents. / The birth family I never knew […]” I recognize this response to grief. It’s the way after someone dies, you cannot help but feel hope and validation in scientific concepts like how “atoms don’t disappear or cease to exist / but are redistributed. / An ancient fern becomes coal. / This lump of coal begets a diamond.”

I was floored with recognition when I read “First Cold,” an account of Santos’ son’s first viral infection, “a badge / on the sash of life,” something normal and very survivable and yet so able to render parents miserable with “a feeling of helplessness / guilt for not being able to take away our children’s hurt […].”

“Saudade” ravages, but “Ode to Joy” redeems – it is a testament to the way we come out the other side of a loss, even the deepest, and think, what now? – and the answer, of course, is to find joy in the way that the ghosts return to catch up, as if on the phone. “Ode To Joy” begins with the W. H. Auden epigraph, “Only on a varied diet can we live. / The pious fable and the dirty story / Share in the total literary glory.” With Ghost Face, Greg Santos provides a stunningly rich account of the many complexities of his Cambodian, Portuguese, and Spanish heritages – bound, as it always is, by the organizing material of “family,” as a concept, which is less blood but what moves it, which is love.mRb

Tara McGowan-Ross is an urban Mi’kmaw multidisciplinary artist and writer. Her debut nonfiction collection, Nothing Will Be Different, is forthcoming in the fall of 2021 with Dundurn Press.