A review of Don't Ask by Gina Roitman

In Gina Roitman’s novel Don’t Ask, Hannah Baran is forced to face the grey zone that is her family’s past. As a child, she was told by her parents there was no one left in her family – that everyone else had died during the Holocaust. But little over a year after her father’s passing, her mother’s mysterious disappearance and subsequent suicide left her with questions she feared would remain unanswered, except perhaps through the cryptically encoded notes her mother had left for her throughout her life. Stored away in the many shoeboxes Hannah had filled since childhood, these sparsely worded messages appeared at moments throughout her life when a mother’s comforting arms and words should have. 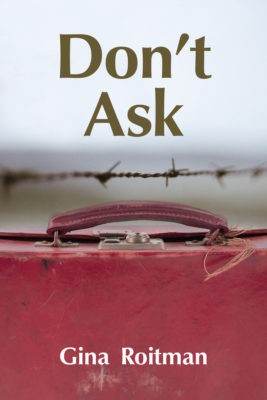 The difficult, mostly silent relationship between Hannah and her mother, Rokhl, came to an end the day her daughter announced she was going to Germany on a business trip. In a loud fury, using a voice never heard before, Rokhl forbade her daughter to go. It was the last time Hannah saw her mother. A final note, found by accident while going through her mother’s wallet in a frantic search to figure out where Rokhl might have gone, only deepened the mystery: it read, “I am not her.” Rokhl’s suicide would inadvertently open a door onto the missing part of her family’s past.

The unsayable and unwritable, with which this daughter of first-generation Holocaust survivors was brought up, is ever so skillfully embedded into a blossoming love story between two individuals who have too many reasons not to come together. The novel is a testament to Roitman’s ability to articulate this powerful mother-daughter bond, which is, dare I say, the real story here. About halfway through, nestled between Hannah’s and other characters’ intertwined accounts of their lives in the form of frame narratives, the reader is gradually given access to what turns out to be Rokhl’s testimony – the one she has written for her daughter.

At the novel’s forefront is Hannah’s professional life as a successful real estate agent, in which she is managing an important cross-Atlantic deal with an antagonistic pair of old enemies and a very unlikely love interest. Whereas everything concerning her father, Barak, is crystallized in memories, everything else in Hannah’s life, including her life-long friendship with her childhood friend Marilyn, is continually put to the test by a burgeoning romance with Max Mohr, her German real estate counterpart.

To add to the drama, these two agents are left perplexed by their respective bosses, who are fighting over what seems to be an innocuous piece of land in Quebec. But all comes full circle in the end to what appears to be a new beginning, or a bildungsroman-like arc, in which her affection for Max, as well as this land deal and its two protagonists, turn out to be less important to her than the freedom she now feels from having knowledge of her parents’ mysterious youth.

Carefully and generously layered, Roitman’s novel, outwardly labelled as a literary thriller, is a powerful story of a daughter dealing with her mother’s death while reckoning with a family past so traumatic its truth is haunted by history. As I’ve recently learned on a personal level, fiction, just as much as fact, can be a powerful catharsis and can help in coming to terms with one’s own family history, however difficult and secretive it may be. Though I could have spent more time here describing the novel’s intrigue, I believe this underlying narrative is Don’t Ask’s mainspring and resonates more deeply.mRb