A review of Giving Up by Mike Steeves

Reading Mike Steeves’s Giving Up can be uncomfortable. It’s full of the psychic detritus that floats around our brains from moment to moment: self-doubt, fear, justifications for unhealthy behaviour, petty grudges we can’t let go of, obsessive attention to the slog that can plague the pursuit of our goals and dreams. Optimistic perspectives are disregarded and replaced with cynicism. And on top of this, the novel is a thorough dissection of an ongoing relationship.

To call Giving Up “uncomfortable” is not to say it isn’t enjoyable. I tend to believe literature should unsettle. The novel takes us deep into the psyches of young married couple James and Mary and their life in Montreal through an alternating third-person He said/She said/They said format. Despite the relentless interiority of the prose, streamed without paragraph or chapter breaks, and the fact that action is limited to a single incident in each of the three sections, the book is incredibly readable. 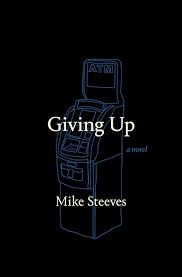 James’s central obsession is his “life’s work,” which is never revealed. This allows the reader to plug in their own time-consuming endeavour for whatever it is James might be doing in his basement, evening after evening for hours on end. Where there was once pleasure in pursuing his ambitions, he now acknowledges that “what he’s trying to do is completely unrealistic,” and that he doesn’t “believe he is capable of pulling it off.” In fact, he lives mainly for the breaks he takes at a local fast food restaurant. Like many who consider themselves to be outsider artists, he’s critical of mainstream society, but he’s even harder on himself. He claims people without their own life’s work are only killing time, only to admit that he’s “the greatest time killer of them all.”

Mary’s fixation on having a family throws the reader down an equally dark rabbit hole. Neither of them is enjoying reaching their goals. For her, sex both brought them closer together and “eroded the bonds” of their love. James’s insistence that he wants a child as much as she does causes her to fear she’s “losing the ability to distinguish between tangible reality and sheer fantasy.” (Though the incompatibility of their goals suggests that she has a relatively good grasp on things). She spends hours on Facebook, compulsively looking at friends’ family vacation photos. And while she tells herself she’s just doing what everyone else is doing, “powerful feelings of envy, loathing, shame, lust, disgust and full on rage,” repeatedly overwhelm her.

Throughout the narrative, thoughts circulate and contradict themselves, revealing the multiple deceptions James and Mary create for themselves, as well as the pretending that’s required to maintain each other’s reality. These deceptions are often harmless in themselves, yet they accumulate over the course of the novel, gathering weight and significance. There’s a confessional quality that’s fascinating in the same way it’s fascinating to watch a celebrity meltdown. No detail is spared. You find yourself embarrassed for them. It’s so easy to judge when they aren’t your problems, yet you can’t help but feel implicated.

In the final part of the book, Steeves highlights just how differently Mary and James see their lives, drawing them towards inevitable collision. The He said/She said effect intensifies here, fluidly switching between points of view. And though it remains ambiguous, the central incident manages to accommodate the possibilities of both James’s and Mary’s realities to compelling effect. Through this final sequence, Steeves reminds the reader that, regardless of our constant critical awareness, there are other drives controlling us and that the thing that is pulling us apart may also be what makes us irresistible to one another.

Giving up never felt so right.mRb