The question “What is Canadian literature?” almost feels like a Zen koan in that it seems impossible to arrive at a single, universal answer. Part of why it’s so hard to define Canadian literature is that francophone and anglophone writers don’t always intersect, plus Canadian literature exists in a broader context of English- and French-language literature, which means we read and respond to authors from all over the world. This is partly why I’ve come to appreciate simple, local literary readings, as they feel like one of the few spaces in which “Canadian literature” can truly exist, allowing writers in Canada to come together, exchange ideas, and hopefully influence one another.

The new issue of the international magazine Granta dedicated entirely to Canadian writers, a first for the publication, feels a bit like this to me – a number of different voices with different perspectives all sharing the same stage and conversing with one another. Featuring stories, essays, and poems, some of which were translated into English from French, the Canada issue of Granta is also, with a few exceptions (Margaret Atwood’s piece, which speaks in tired abstractions), not at all what you would expect it to be. Canadian literature seems to be undergoing a transformation right now, almost like it’s trying to birth the next incarnation of itself, one that will probably feel less like “CanLit” (whatever that means) and instead be more representative of Canada today, in terms of both demographics and concerns. 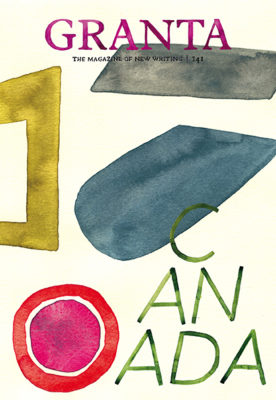 To put together the new issue of Granta, co-editors Madeleine Thien and Catherine Leroux read over a thousand submissions in English and French from a wide range of accomplished writers, a process that probably felt like trying to select which excellent baseball player should play in the All-Star Game. Ahead of the Montreal launch at Librairie Drawn & Quarterly on November 30th, I spoke over email with Catherine Leroux, who’s also the author of The Party Wall, a finalist for last year’s Giller Prize, to ask her a few questions about her experience editing the magazine.

Guillaume Morissette: Since we’re doing this interview for the Montreal Review of Books, I thought I could start by asking you about a Montreal-based writer, Chloé Savoie-Bernard, whom I was really happy to see included in this issue. I read her collection of stories, Des femmes savantes, in French about a year and a half ago, and she definitely seems to me like a writer whose work should be available in translation. What attracted you to her piece?

Catherine Leroux: Just like you, I was very impressed by Des femmes savantes. In this collection, Savoie-Bernard deals with issues that affect women in ways that are oblique and brutal at the same time, in a style that manages to be both funny and devastating. I love her honesty, her courage and the vigour of her writing, its breathless quality. For Granta, she submitted a couple of stories. “Of Roses and Insects” moved me for the same reasons her book fascinated me, but there was something different about it – a restraint, like there was something dormant and deadly within her characters. I also loved the superimposition of a symbolic layer – the imagined presence of insects – that allowed the very elements the protagonists were holding back to be expressed. I think it’s such an ingenious piece and I agree, Chloé Savoie-Bernard’s other work has to become available in English.

GM: My favourite piece in this issue was Nadim Roberts’s essay “Mangilaluk’s Highway,” which follows three boys who decide to run away from a residential school to avoid being punished. It’s an essay that reads almost like a short story and feels, both in terms of tone and the themes it explores, like a perfect fit for this edition of Granta. Could you tell me more about this piece and how it came to be?

CL: Roberts’s story actually came in quite late in the process, but as soon as it presented itself, it was obvious that it was the final piece that was missing. Nadim first met Bernard, the main protagonist of the story, while doing some research on Indigenous people living with HIV. As Bernard was telling him about his life, he mentioned his three-week journey from Inuvik to Tuktoyaktuk (the very same route that is covered by the new “Arctic highway”), a journey he was the only one to survive. It is obviously an extremely moving story that was not very well known outside of Tuk, which is astonishing. So shortly after, Nadim started researching and writing about it, spending some time in Tuk and becoming closer to Bernard. The piece was almost finished when we received it. One of the interesting parts of the process was reading Inuit politician Aluki Kotierk’s notes on the story, which pointed at some blind spots that a lot of writers from the South (including myself) have when thinking about the North – for instance, a tendency to describe as “barren” a land that has sustained northern communities for thousands of years. I know Nadim was grateful for these comments, but they also changed the ways in which Madeleine and I were looking at the entire issue.

GM: When I read collections like these, I love looking for patterns, even if they’re unintentional. For example, the ending of Alexander MacLeod’s story weirdly echoes some of the themes from Johanna Skibsrud’s piece, or Benoit Jutras’s piece says, “We speak to be left alone” and then Alex Leslie’s story replies, “Only speak to yourself in a language only you can understand, and then you can put it away forever.” While editing, did you notice some other hidden links or shared themes between stories?

CL: The shared themes were more immediately visible to us. Language (Fontaine, Daigle, Thammavongsa, Brand, Tremblay), the tension that underlies domesticity (MacLeod, Britt, Savoie-Bernard, Irani), the North (Roberts, Seesequasis, Moore, Fontaine), historical trauma (Garnet Ruffo, Leslie, Farah, Johnson); these motifs all emerged throughout the selection process, and they seemed to solidify as we started thinking about the order in which the pieces would appear. As for these echoes you identified, I would say they are accidental and are meant to be. We noticed a few and alluded to them in the introduction, but there is still so much that we are not aware of. I think that’s the most beautiful part of putting together an issue like this. I love the idea that there is this ongoing, silent conversation floating through the pages.

GM: One cliché about Canadians is that we’re overly polite and we say “sorry” a lot, which is why Falen Johnson’s play “Two Indians” felt so refreshing to me. In terms of tone, Johnson’s piece taps into feelings of frustration, disillusionment, and anger, and ends up feeling blunt, earnest, alive, ultra-focused, and even funny. I’d love for more Canadian writing to feel like this. Did other pieces surprise you in terms of tone and style, in how they challenged your assumptions of what Canadian literature is or could be?

CL: To me, the tone of Johnson’s play epitomizes a sentiment that is present throughout the issue, but conveyed in different ways. The politeness and wholesomeness that are Canada’s trademarks are the first things Madeleine Thien and I agreed to challenge in this issue, and I think a lot of the work that attracted us carries a certain exasperation with the veneer of goodness of a nation that has so much on its conscience. I didn’t expect so much of that coming from English Canadian writers. I think there is an inherent struggle about the French Canadian ethos and (this is something I confess in my introduction) I still had a lot of preconceptions about the anglo consciousness being mostly clean and one-dimensional. I was surprised by the tension that underlied the vast majority of the pieces we received, and also by how experimental a lot of the writing was – to my delight.

GM: Reading the issue, writers like Kim Fu or Souvankham Thammavongsa made me feel like I’d love to see a “Best Young Canadian Novelists” edition of Granta. Since this issue features a little bit of everything – younger writers, more established names, etc. – did you notice some generational differences in terms of the worldviews or concerns of some of the younger writers vs. the themes explored by the older, more established names, like Douglas Coupland?

CL: I think all the writers we chose for the issue are affected by a sense of unease and uncertainty, but the younger authors might feel it and express it more acutely. One thing that became very clear as we were reading through the thousand submissions we received was that we were at a turning point. The traditional Canadian identity (something that never truly existed in reality) is shifting, as are the ways in which we think about our history and our future, and about who should have the power to define those. This, of course, can be felt in a number of areas, but I do think that literature can act as the proverbial canary in the coal mine, sensing ahead of time the changes coming or, at least, the mounting discomfort with the status quo. So when it came to editing this issue of Granta, we didn’t think of our selection in terms of up-and-coming vs. establishment, but rather tried to see how the two forces could come together to express and illuminate this shift.

GM: I love the line “Language is a risk that a nation takes” from Naomi Fontaine’s piece. In Montreal, we have two literary communities, one francophone, one anglophone, that run parallel to one another and sometimes seem to exist in almost separate universes, which seems crazy to me. Writers are writers regardless of language, like they’re human beings with similar interests and similar problems, so it seems like everyone would probably benefit from interacting and crossing paths more often. Is that something you would also like to see, like maybe more bilingual readings to encourage more crossover between both literary communities? How do we mitigate the “risk” of language to break this isolation

CL: I couldn’t agree more; it seems so absurd that the bonds between the European French and the Québécois literary communities or the bonds between the Anglo Canadian and the British and American literary worlds are stronger than those between French Canadian and Anglo Canadian writers and critics. There are important conversations that are not happening. This is one of the reasons why I’m so excited about bilingual writers’ festivals like the Frye or Blue Met. They have a way of “de-dramatizing” the language gap, of presenting it as something rich, fruitful. In general, any event where translators are involved is also a great place to sort of bask in this coalescence. Translators have always understood and respected the risks inherent to moving from one language to another and the even greater risks of not attempting to build bridges between them. The impossibility of a perfect translation, of a perfect integration of linguistic communities, shouldn’t be seen as an obstacle, but rather as the effervescent, irreducible tectonic hot spot that it is. mRb

Guillaume Morissette is the author of two novels, most recently The Original Face (Véhicule Press), a Globe and Mail Best Book of 2017. If you can, adopt a senior dog from a rescue centre near you.