Manhwa for the Marginalized

A review of Grass by Keum Suk Gendry-Kim

Keum Suk Gendry-Kim, the award-winning author of Grass, is known for both her work about the marginalized and for her manhwa, a South Korean comic style. Grass is a graphic work of non-fiction about a former comfort woman, Lee Ok-sun, during World War II. Gendry-Kim also appears as she coaxes Lee Ok-sun, now in her nineties, to talk about her life and tragic experiences. Painted in black ink, the story opens with a note on the controversial term “comfort women,” a Japanese euphemism that survivors say distorts victims’ experience. While acknowledging its many failings, the author uses the term, and it proves to be a clever way to make the horrors of sexual slavery easier to read.The Imperial Japanese Army forced an estimated 350,000 to 410,000 impoverished girls and women, mostly from Korea, China, and the Philippines, into sexual slavery. Many were lured with the promise of work in restaurants and factories, while some were simply abducted. At just fifteen years old, Lee Ok-sun was kidnapped on her way back from running an errand for a tavern where she worked in exchange for room and board. She and many other girls were put on a freight train and sent to Longjing, China, to work at a comfort station, one of many brothels servicing Japanese soldiers throughout the Japanese-occupied territories.

Grass begins in the 1990s with Lee Ok-sun returning to her native Korea after spending fifty-five years in China. She was one of many former comfort women who were helped to return home by a South Korean television network, as part of a docudrama. As a child, Lee Ok-sun’s only wish was to go to school, but her family was too poor and could barely keep their children fed. In an attempt to wipe out Korean culture, the occupying forces made Koreans take Japanese names and speak only Japanese. Those who refused were sent to labour camps and mines, denied ration cards, and declined admission to schools. 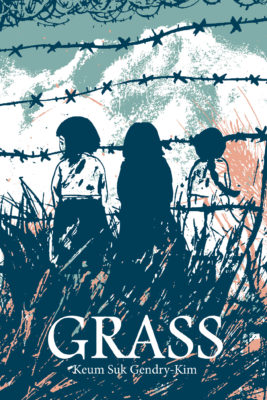 Lee Ok-sun was raped before she was old enough to have her first period. She was repeatedly beaten while being forced to service dozens of Japanese soldiers, sometimes daily. She survived her years of incarceration in the comfort station by clinging to hope. When the war was over, Lee Ok-sun and a few other comfort women were left destitute, wandering from town to town, shunned for their past work.

The subject matter of Grass is indeed grim, but Gendry-Kim’s beautiful brushwork reduces some of this heaviness, making this book memorable. She skillfully paints mountains, fields, trees, and skies as reminders that life goes on, giving the reader respite from some of the trying moments in Lee Ok-sun’s life. What is the most striking about Grass is Gendry-Kim’s thoughtful illustrations, which reflect the mood of each scene. The harsher the scene, the heavier the brushwork and the darker the panels. For instance, Lee Ok-sun’s rape as a teen is followed by twelve completely blacked-out panels that express the unfathomable depth of her trauma. It takes a special talent to make this tragic story into such compelling reading.

Although Gendry-Kim describes the three years of inking Grass as walking through a long, dark tunnel, Lee Ok-sun survived her many ordeals with her sense of humour reportedly intact. Today, the former comfort woman and activist continues her fight for compensation and an apology from the Japanese government for the many injustices she suffered.

The title Grass also infuses the book with some much-needed lightness. The reason for the title is revealed at the very end: “grass springs up again, though knocked down by the wind, trampled and crushed by foot.” Grass is ultimately about the doggedness of the human spirit. mRb