A review of Green Meat? by Edited by Ryan M. Katz-Rosene and Sarah J. Martin

The knot of urgent issues that ties together hunger, environmental crisis, and animal exploitation gets more tangled every day. Among its most visible strands is the question of the production and consumption of meat. Millions of animals are culled due to disease or the inability of the industrial food system to slaughter and process them – a weakness exposed by the current pandemic. We grow fodder for hogs and cattle while families all over the world go short on food. Meat replacements (think Impossible Burgers) are increasingly available, making it easier to reduce or eliminate animal products in our diets, even if we are not vegan chefs.

This anthology is therefore timely, and the diversity of its subject matter reflects the complexity of the issues involved, as well as the inability of the many stakeholders to agree on how to frame them – or even measure the data.

Climate change and environmental degradation add to the urgency of making responsible food choices – in the words of contributor Tony Weis, to reduce our “ecological hoofprints.” Editors Ryan M. Katz-Rosene and Sarah J. Martin are careful not to take sides, preferring to make space for complexity. They recognize that the answer for a local butcher on Salt Spring Island will not be the same as for a rancher on the prairies, where the hooves of ruminants can break up compacted topsoil, improve water management, and increase biodiversity with the aid of, ahem, natural fertilizer. And then there is the urban shopper looking to fill a grocery cart with affordable food the kids will eat (obesity and diabetes be damned). 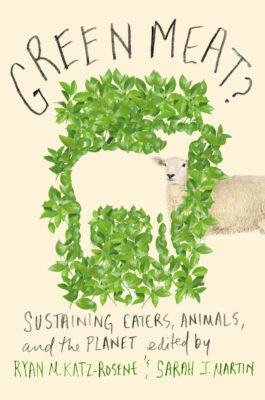 Along with the mantra of complexity, a few points recur. One is that Big Meat, dominated by only four major players, is terrible for animals and for the environment. These firms pour pharmaceuticals, fossil fuels, and synthetic fertilizers into a system that produces a massive amount of meat for the global market – very much to the detriment of animals as well as small producers, many of whom are at a disadvantage as they struggle to offer high-quality “happy” meat. Another is that we would do better to eat less (but better-quality) meat, from both compassionate and environmental standpoints, while acknowledging the persistent problem of how to feed the mushrooming global population.

Among the varied essays, several stand out. Despite its dry-sounding title, Sheldon Frith’s “The Evidence for Holistic Planned Grazing” is a pleasure to read, explaining the environmental benefits of a grazing system that mimics nature in easy, engaging prose. The essential and enlightening “Eco-Carnivorism in Garden Hill First Nation,” by Shirley Thompson, Pepper Pritty, and Keshab Thapa, considers the deeply integrated traditional hunting and land-use practices of this Oji-Cree-speaking community, whose rich foodshed is, gobsmackingly, classified by the Manitoba government as only for mining purposes. Gwendolyn Blue’s “A Feminist Multi-Species Approach to Green Meat” draws on theorists such as Donna Haraway to trouble the relationship between our need to consume to sustain life and the desire for a “multispecies ecojustice.” And Lenore Newman’s “The Promise and Peril of ‘Cultured Meat’” takes the bull by the horns, so to speak, considering the cultural, economic, and gastronomic issues associated with lab-grown meat. It is full of clear, fascinating information about the nuts and bolts – or cells, scaffold, media, and bioreactors – of “in vitro meats.”

Green Meat’s greatest strength and weakness are the same. In allowing for a diversity of opinions, the editors succeed in avoiding facile conclusions. But the book’s range is so wide it ends up being somewhat scattershot, and may not fully satisfy a reader in search of a comprehensive view – more of a charcuterie board than a steak. mRb