A review of Griffintown by Marie Hélène Poitras

Marie Hélène Poitras’s Griffintown is set in a place few Montrealers would recognize. It is at once a slice of the south-west neighbourhood in the here-and-now and a glimpse into a parallel world where lost, life-hardened cowboys still malinger, outlaw justice reigns, tender-hearted ingénues need saving, and humans live cheek-by-jowl with their spirited work animals.

It is clear from fairly early on that the novel is in some sense an elegy for a time that has already passed and just doesn’t know it yet. Poitras takes her reader into the anachronistic world of present-day calèche drivers, each with their own sad story, at a moment when their frozen-in-time way of life faces immediate danger. Harnessing the language and conventions of the spaghetti western, the Montreal-based author and journalist dips into the genre’s stable of tropes for insight into the machinations underlying the urban landscape we inhabit.

More a snapshot of a community than a linear story, the plot is fairly minimal. The tale opens with the murder of Paul Despatie, “owner of the stable and lord of the domain,” as the carriage drivers are returning for the summer tourist season. As the wake of his death ripples through their ranks, it exposes the troubled relationship between the characters who inhabit Despatie’s domain and the outside world. 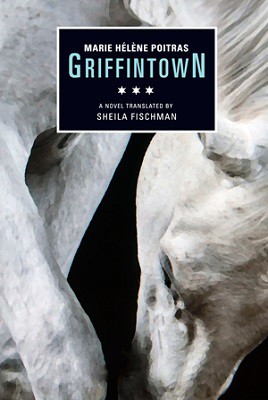 The murder forces this self-contained community, with its own laws and logic, to reckon with the forces operating in the city at large as the neighbourhood is subsumed under a broader urban vision – a move that drags the tale back into the now by highlighting the quiet violence of gentrification in a changing city. This strand seems particularly timely, when the real Griffintown is fast-changing and with tourist-baiting calèches facing a real possibility of extinction.

Poitras writes beautifully, realizing her world in a rich, emotional prose that invites the reader to settle in for a long, slow read. Her sensuous language evokes empathy for the horses, their riders, and ways of living that have lost their place in the city. Poitras slides back and forth between her human and equine subjects, figuring the horses and city anthropomorphized, then the humans as horselike. Time itself seems to be one of the tale’s protagonists as the story shifts and slips between a palimpsest of Montreals old and new.

On its release in 2012, the French-language original won the Prix littéraire France-Québec and was nominated for the Prix Ringuet, as well as landing on numerous best-of lists. Sheila Fischman’s stunning English version makes clear how the act of translation is itself creative, laying bare the work that goes into recreating poetic expression in a different linguistic field while keeping the local flavour of the original.

Griffintown is a lyrical novel that is at once a portrait of a singular community (“the humanity at once frail and powerful that once reigned”), a meditation on politics and class in a city’s evolution, and a requiem for the interdependence of humans and animals. Throughout, it is steeped in nostalgia for a Montreal that has always been and never was.