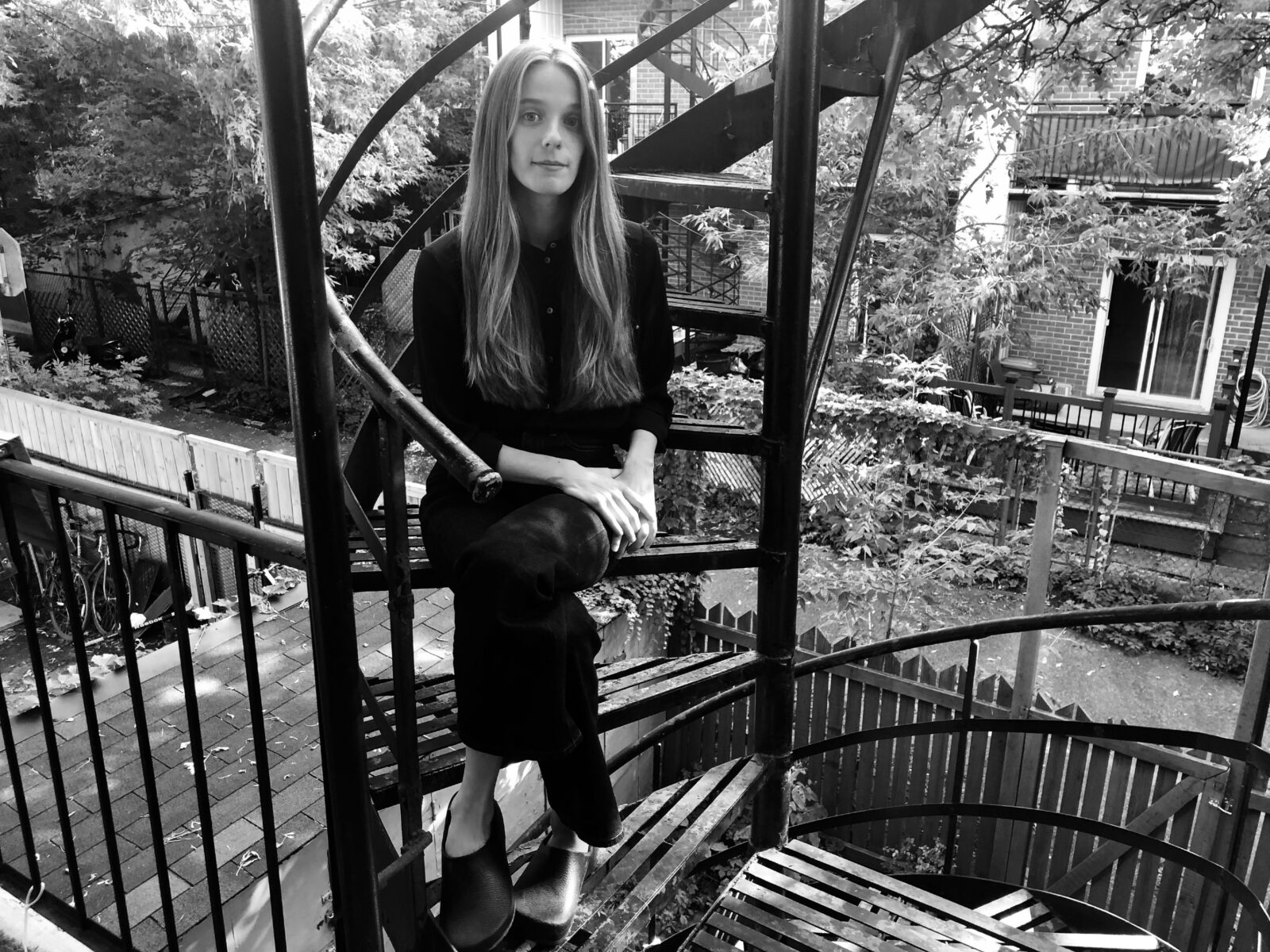 Letters from Montreal is a collaged portrait of a mythical city, rendered through a series of personal accounts. The anthology spans more than a decade of essays published in Maisonneuve’s column of the same name, launched in 2011 by then editor-in-chief Drew Nelles, alongside nine original commissions.

Conceived as a space for local authors to document everyday life in the city, the column distills something of the essence of Montreal as writers describe the city through their particular experiences: their jobs, their relationships, and their changing neighbourhoods. Anthologized, the essays are a chronological document of Montreal as a changing city over the past decade. The book’s slim size belies the number of stories within: sixty short essays, each hovering around 700 words, offer concise and vibrant snapshots that, collected, create a composite picture of Montreal as an ever-changing place of perpetual heartbreak and possibility. 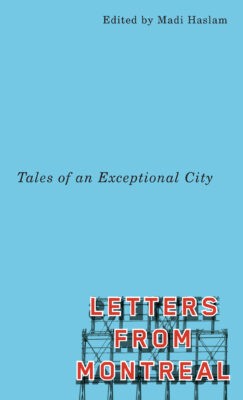 In the introduction, Maisonneuve’s editor-in-chief Madi Haslam describes a city of contradictions, a landscape overflowing with beauty and debris that feels both like a stranger and a friend. In Montreal, she writes, the sun sets in the north: “I knew this simply does not happen. And yet, there it was, dipping below the horizon like a shrunken Orange Julep.” Navigating Montreal means accepting this internal logic, suspending traditional geography and submitting to the local conviction that Avenue du Parc cuts through the city from north to south.

But what sets Montreal apart, other than being home to more unicyclists than any other Canadian city? (For more on Montreal’s penchant for cirque and its roots in Quebec sovereignty, read Valeria Silva’s essay “Vanishing Act.”) There is something particular to how people speak about Montreal, whether as locals or new arrivals gearing up to enroll in French classes and give the city a go. Montreal is shrouded in its own mythology: whispers of cheap rent, bagel rivalries, dépanneur wine, and Cinéma L’Amour. Everyone in Montreal is beautiful, you might hear outside the city, and every apartment has a balcony. Montrealers know that the city constantly fails these myths, while also surpassing them. This balance plays itself out in Letters from Montreal, satisfying the reader’s craving for gossip about warehouse parties and brief romances, while also expanding any reader’s expectations of what the storied city has to offer.

“You can’t talk about this book without acknowledging that Maisonneuve is an English magazine and these writers are mostly anglophones,” Madi Haslam points out when we discuss the collection.  The anglo-centric scope of the collection is more apparent in some passages than others. In “Il Et It Une,” Correy Baldwin investigates the meaning of a phrase painted on the side of a building, Il Et It Une, letters faded with time, above a spray-painted fleurs-de-lys. The meaning, which Baldwin eventually discovers, is one which French speakers familiar with Quebec history might quickly identify: Il Était Une Fois, the fleurs-de-lys signaling the phrase’s similarity to the provincial motto of francophone pride and nostalgia, Je me souviens.

Though any collection of stories would inherently fail to capture the entirety of a place, Letters from Montreal nonetheless offers a relatively diverse collection of voices. Many essays take place beyond the well-traversed neighbourhoods of the Plateau and Mile End, from eating smoked meat in Paris to poutine in Zanzibar. Jessica Wei writes a moving and detailed portrait of Montreal’s Chinatown through her parents immigration story in “Under the Paifang,” and Crystal Chan captures conversations between new Canadian immigrants in a beginner French program in “Death in a French Class,” one of the collection’s funniest and most compelling contributions.

In “Melting Away,” Jeff Miller reflects on being the very first employee at Dépanneur le Pick Up. Lured by the prospect of free rent (a friend’s sister offered him the bottom floor of her duplex in Ville-Émard), Miller moved to Montreal from Ottawa in 1999, knowing little other than that Montreal was home to godspeed you! black emperor and a 24-hour bagel shop. For Miller, Montreal was a place that fostered creativity through low-cost living. Working at le Pick Up, he witnessed tech conglomerates start to buy up real estate. “When I moved to Montreal,” he tells me, “the city felt really open in this way where there was a lot of, say, empty retail space, or even vacant lots with buildings that had been taken down, and then around the time that I was working at the Pick Up, it felt like the first time that the city was really filling in, and it just felt a little more crowded.”

The increasing demands of developers on city infrastructure resurface as the collection moves forward chronologically. “You read about people’s gloriously cheap rent in the beginning,” Haslam says, “and then at a certain point in the anthology people start becoming fixated on the housing crisis or the ongoing effects of the pandemic or gentrification.”

In “The Shape of a Scene,” Rosie Long Decter tracks how Montreal’s music scenes respond to this shifting landscape. “I can name at least eight independent venues that have recently shut down or been bought out,” she writes. She reiterates this concern during our conversation, referencing an article published just two days prior about the potential redevelopment of an iconic Van Horne warehouse into a boutique hotel. She says that the music scene’s resiliency is “a testament to the longstanding work of experimental and punk and DIY communities here and people who have been fighting for those spaces for twenty years,” adding, “my sense of hope comes not from the material conditions, but from the people kind of working with what they’ve got.”

H Felix Chau Bradley brings up the same article in our conversation, remembering the Van Horne warehouse area as a space where their bands practiced, friends had art studios, and they went to their first after-hours parties. Bradley’s essay, “Up on the Roof,” documents the life of the Rialto Theatre, a National Historic Site. We discuss the importance of venues to the cultural life of Montreal, both protected buildings like the Rialto as well as less conventional settings. “The shows that I remember best are the ones that happened in weird spots,” they tell me. “I saw Yamantaka // Sonic Titan play a show many many years ago during Nuit Blanche in the Eaton Centre food court, which was, like, a very funny spot for them to play a show.”

Like Decter, Bradley credits the creativity of arts organizations for sustaining Montreal’s cultural life despite the pressures of gentrification. They describe Pop Montreal as being instrumental in reimagining physical spaces in Montreal, a strategy that “encouraged people to either go to parts of the city they haven’t been to, or just reconsider spaces that they imagined could only be used for one particular thing and imagine these spaces used for other purposes.”

Though both Bradley and Decter depict Montreal as a city consistently shutting its doors, they also describe a city that is constantly renewing itself through the dedication and creativity of its artists. “There’s a political undercurrent that runs through the entire book,” Haslam says, “but the way politics is treated in the book is truer to how we experience it in real life, where these major political issues are coming up in a fragment of a conversation, or are filtered through someone’s friendship or relationship or the way it’s impacting them in a very specific part of their life.”

Language tensions, housing crises, and the hypocrisy of Quebec’s Bill 21 surface in stories about working as a house cleaner for a conspiracy theorist, gambling on the VLTs in Mile End’s Idée fixe, and chasing sheep around Parc du Pélican as an apprentice shepherd. The unique attraction of the essays is how deftly they balance levity and humour with meaningful reflection. Like any other place, Montreal is its people and the stories they tell. Here, Maisonneuve offers us a selection of the many voices that make up this legend.mRb