“You’ve got to legalize it,” sang Peter Tosh in his famous song. On October 17, 2018, Canada took Tosh’s advice and did exactly that, legalizing cannabis throughout the country. High Time is a book that thinks about what might happen as a result of this fundamental change in Canada’s regulatory regime, when a drug that was widely available on the black market moves to being widely available by legal means.

But the book asks more questions about the legalization of cannabis than it provides answers. Split into sections dealing with politics, public health, law, economics and taxation, and, finally,
the international context, the book is derived from a classic academic formula: it’s a collection of papers from a conference on the subject of marijuana legalization held in May 2018. Normally these
types of anthologies are rather dry. The topic and contemporary relevance of this particular book, however, means that it’s an engaging read overall, something that one could imagine becoming the basis for a multi-part Netflix series detailing the history of drug policy in Canada in light of recent changes. 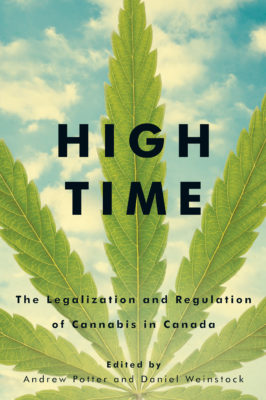 Certainly, there is some repetition in the text; that is to be expected since each section features a different essay. But this structure places emphasis on some key elements of policy history, such as the Le Dain Commission of Inquiry into the Non-Medical Use of Drugs that took place from 1969 to 1972. This commission recommended the legalization of cannabis forty-five years before Justin Trudeau’s Liberal government introduced Interestingly, the book ends with the transcription of a talk from a Portuguese official about his country’s decision, almost two decades ago, to decriminalize all drugs. The various writers in High Time ask readers to think about the corporate influence possible in a legal environment, the potential of government conflicts of interest due to the huge money inherent in cannabis sales, and the the same idea to Parliament. As well, the book consistently refers to the particularities of Canada’s governance structures, in which the provinces demonstrate a range of responses to tobacco, alcohol, gambling, and other drugs, vis-à-vis a federal jurisdiction over criminal matters.
It’s an engaging read overall, something that one could imagine becoming the basis for a multi-part Netflix series …

The legal precedents are somewhat dense, but some unique research – such as data collected on drug arrests disaggregated by race (information not available from police or government sources) completed by Akwasi Owusu-Bempah, Alex Luscombe, and Brandon M. Finlay alongside VICE News – provides tremendous insight into Canada’s war on drugs. Spoiler: it’s not really different from the racist judicial practices in the United States. The book also provides insight into the influence of colonialism on Canada’s decisions involving drug policy – such as in Jared J. Wesley’s look at the legalization and colonial legacy – reminding the reader that 1908’s Opium Act was based on anxiety around Asian populations, and how the lack of engagement with Indigenous populations regarding the development of this new regulatory environment seems to continue this discrimination against and marginalization of communities.

Interestingly, the book ends with the transcription of a talk from a Portuguese official about his country’s decision, almost two decades ago, to decriminalize all drugs. The various writers in High Time ask readers to think about the corporate influence possible in a legal environment, the potential of government conflicts of interest due to the huge money inherent in cannabis sales, and the emphasis on revenues rather than public health (such as in Daniel Weinstock’s essay about youth usage and legalization). And, as Alana Klein explains in her contribution, the Liberal government’s enthusiasm for cannabis legalization significantly surpasses their enthusiasm for harm reduction policies and practices. Taking all this on board, it’s hard not to wonder whether Canada’s decision-making process was the right one – and that’s before Roojin Habibi and Steven J. Hoffman account for the reality that legalization contravenes a number of international conventions, whereas decriminalization does not. Portugal’s decriminalization process was fundamentally informed by the principal of humanism, but it seems like, according to Potter and Weinstock’s edited collection, Canada’s process was not so singularly focused. It’s high time to think beyond basic legalization, and this book provides a strong foundation for future considerations. mRb