Portrait of a Country

A review of Home Game by Endre Farkas

Hungarian-born, Montreal-based writer Endre Farkas is an award-winning poet. In 2016, he published the semi-autobiographical novel Never, Again, about a family of Holocaust survivors in Hungary. Home Game is the follow-up, with the protagonist Tommy Wolfstein now a teenager in Montreal amid the throes of 1960s social upheaval. Tommy, a star soccer player, gets the opportunity to travel to his homeland for a game, forcing him to confront the spectre of his family’s past.

The first part of the book is largely a chronicle of Tommy coming out of his shell, from a European Jewish refugee family into the thoroughly modern world of 1967 Montreal. The multicultural mix of his soccer team (complete with a few questionable cultural stereotypes) acts as a gateway; when he meets his Spanish teammate’s flower-child sister, Marianne, she introduces him to the seismic changes happening in society. To anyone who lived through the Summer of Love and Expo 67, the warm look back at the era will no doubt strike a chord. 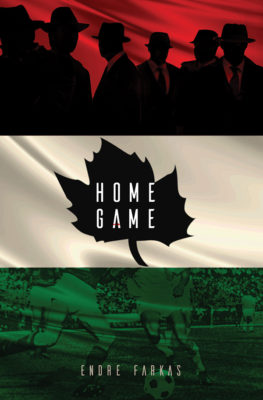 But those who’ve had their fill, or more, of Boomer nostalgia may find themselves occasionally rolling their eyes. A scene where young Tommy is seduced by Marianne while smoking pot and listening to the Doors’ “Light My Fire” is suffused with genuine sentiment, but at least to my cynical Gen-X eyes, it’s a pileup of imagery that’s extremely well worn, to put it politely. That’s perhaps the most glaring example, but it’s one of many: as Farkas paints the picture of an innocent square getting turned on to the various freedoms of the sixties, I found myself growing impatient: this is a story that’s been told many, many times before.

When Tommy’s parents refer, fleetingly, to their experiences fleeing Hungary, the story gets darker and more intriguing. Worried about the ongoing persecution that Jews face in their homeland, they try to discourage him from going on the soccer trip, but he insists – partly out of naive bravado, but also because of a heartfelt desire to connect with his roots. Tommy sees his parents as fearful and out of touch, but we soon find out that their concerns are grounded.

Farkas breaks up the narrative with flash forwards to Tommy’s travails in Hungary, and when he arrives there, the novel really comes alive, in both its story and its imagery. The small-town Hungary of 1967 mixes the charms of an old world that has yet to embrace modernity (his aunt lives in a house with no running water, and her next-door neighbours are working blacksmiths) with the widespread chronic paranoia of a Soviet state. Farkas’s portrait of the country is full of detail, lively and engaging, and here Tommy is confronted with the very real reasons for his parents’ fears.

The idealistic Tommy, coming of age in the era of Expo, believes in a society changing for the better, but his battle-worn, old-world parents caution him that some things never change. Today, with the forces of xenophobia and ethnic nationalism one again on the ascendancy –  in Hungary and closer to home – Farkas’s book offers a sobering reminder that his parents have a point: these dark forces have always been with us and may always be. I would have liked to read more of the gripping Hungarian portion and less of the clichéd Montreal parts, but the book succeeds in weaving together an evocative, bittersweet tale.mRb