A Worse Offence Than Writing a Bad Novel

Hooked on Canadian Books: The Good, The Better, and the Best Canadian Novels Since 1984 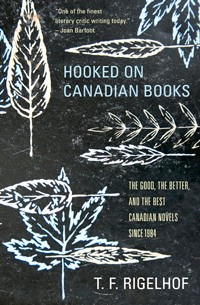 Hooked On Canadian Books: The Good, The Better, And The Best Canadian Novels Since 1984
T.f. Rigelhof

Say what you will about the state of Canadian novels – a subject that elicits sharp opinions from the minority of Canadians who actually pay attention and virtually no opinion at all from everyone else – but any way you look at it, long-time Montrealer and college teacher T.F. Rigelhof has read more of them than most of us ever will. As a prolific reviewer for The Globe and Mail, he’s been given a first say on many of the big Canadian novels of the past three decades. Over those years he’s established a firm reputation as a tireless promoter – though not necessarily a very critical reader – of this country’s authors. Hence the title of Rigelhof’s new book, Hooked on Canadian Books: The Good, the Better, and the Best Canadian Novels Since 1984, which collects and modestly refashions his many positive reviews into one wide-ranging volume.

In assembling this collection, Rigelhof has correctly discerned that there is a need for this kind of book in the “annals of ourlit” – a term he employs to address larger issues that have characterized the Canadian novel. The act of looking back, appreciating, and assessing the Canadian novel isn’t something that happens outside of university classrooms. There is no body of popular criticism to address the subject for the average reader, nor is there much talk of canonization. There isn’t even a healthy community of publishers reissuing the many older novels out there that are worthy of new audiences.

So Hooked on Canadian Books fills a big hole. And while Rigelhof is not exactly operating on the level of a Northrop Frye, as The Globe and Mail‘s Bruce Meyer would have it, his affection for the Canadian novel is hard not to admire. He really has read a lot of them, and readers of Hooked will find much pleasure in sorting through the many titles and authors Rigelhof has written about since 1984 – though to be fair, only 10 novels here date from the 1980s.

Rigelhof is strongest when making cases for underappreciated writers’ writers, such as Joan Barfoot, Josef Švorecký, Carole Corbeil, and Keith Fraser, or when introducing the readers to overlooked gems, such as the mammoth two-volume An Irish History of Civilization by Don Akenson. When championing the works of the half-forgotten, he articulates bold and convincing cases for writers whose craft and imagination extend the publicity-controlled picture of what constitutes CanLit, a term Rigelhof rightly derides as too limited.

Too bad Rigelhof rarely develops his thoughts beyond one or two pages per novel, in a collection that covers over one hundred works. The context of what connects these books to each other, how they all converge out of complementary eras and mentalities, is often glazed over. In too many cases, the writing reads as if it were culled from longer works and spliced together with quotes from the novels, or the writings of others, to create an awkward, perfunctory pastiche. The quadruple review of Zoe Whittall, Heather O’Neill, Miriam Toews, and Gale Zoë Garnett which leads off the collection takes but a mere six pages to dispense with. Certainly an avid reviewer should have more to say about A Complicated Kindness – one of the most popular and critically acclaimed Canadian novels of the past decade – than two paragraphs that could have been gleaned off a dust jacket, plus an equal amount of space for quotations. Ian McGillis warrants only one paragraph of original writing by Rigelhof combined with a lengthy second paragraph of what Yann Martel thinks, and then a third paragraph consisting of the publisher’s blurb for 2002’s A Tourist’s Guide to Glengarry. Why bother?

By now, the effusively worded positive review is as much a cornerstone of the Canadian novel as the term “CanLit” itself. But there are occasions – especially when writing about some of the country’s more respected authors – on which Rigelhof bends over backwards to deliver the most over-the-top praise a combination of adjective, adverbs, and winking classical references can muster. In less than two paragraphs, Wayne Johnston is compared to both Shakespeare and Dickens, while his storytelling is deemed “brilliant, bravura, beautiful, mesmerizing, spellbinding, magical, splendid, entertaining, evocative, cavernous, capacious, operatic, hypnotic, and impassioned.” Never mind the sentiment itself. Apart from constituting a flagrant misuse of a thesaurus, is it at all responsible criticism – or even responsible adoration – to go overboard in this manner?

Sadly, the myriad ways to over-validate homegrown authorship run wild in Hooked on Canadian Books. Taken on their own, Rigelhof’s reviews in The Globe and Mail often read as highly articulate and loose-lipped – digestible praise gunning for the pull-quotes section of a book’s back cover. But taken as a collection of hundreds, they seem to reveal someone who tucks away his more discerning judgments and perhaps sidles up too closely to the publishing industry. CanLit is supposedly big business, so long as reviewers help out and no one hurts book sales by being too negative. Right? Once that notion rises up from these pages and gets lodged in the reader’s mind, the reader’s trust in Canadian novels gradually diminishes, which is arguably a worse offence than simply writing a bad novel. mRb

Dimitri Nasrallah's second novel will be published next spring.