A review of Hungary-Hollywood Express by Éric Plamondon

There’s a kind of void at the centre of Éric Plamondon’s novel Hungary-Hollywood Express, an emptiness that is by turns frustrating, baffling, and simply there, like a Zen state of mind. Fragment follows fragment like thoughts in a mind suspended between waking and sleeping, and again and again the book returns to the life of actor and Olympian Johnny Weissmuller. And yet this novel, the first part of a trilogy, isn’t a difficult read. The prose is translucent, flowing, beautifully translated from its original French by Dimitri Nasrallah. Chapters devoted to Weissmuller are offset by the ruminations of the narrator, Gabriel Rivages; by passages about American author Richard Brautigan, Samuel de Champlain, Albert Einstein, and others; and occasionally, by pieces of simple, lovely poetry:

Rice
in milk
in bed

a little
for you
in bed

we read
we laugh
in bed

This bricolage of disparate elements seems to be – at least partly – about fatalism, about Rivages’s inability to hit the high notes of life in the way Weissmuller, Brautigan, and Jack Kerouac did. “If Kerouac managed to write On the Road in three weeks, after seven years of bohemian journeys, then I should be able to write On the Highway in one week, after nine years of traffic jams,” Rivages insists. He is plagued by quotidian workplace tedium, by a depressive fixation on suicide, by turning forty, by endlessly unfolding memories. Most of all, Rivages is fixated on Johnny Weissmuller. 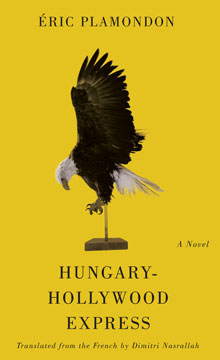 His obsession starts when he sees a documentary on television: “What really struck me was learning that the man who’d won five Olympic gold medals and broken twenty-eight world records in swimming, that this man, this legend, this myth, had ended his career as an actor in bad TV commercials, as a public amusement on talk shows, with a monkey on his knees. Worst of all, at the very end he was a host at a Las Vegas restaurant.”

This is what terminally bored people do. We all do it. We all lose ourselves in Wikipedia entries about our favourite icons. Our lives are empty so we fill them with the lives of others. More famous others. Leonard Cohen died just before I started writing this review, for example, and of course I found myself wandering through the Internet soaking up whatever I could find about him. This is precisely what Rivages is doing with Weissmuller, looking for a life that reflects the fatality, the sense of failure of his own. And so the reader, like it or not, learns the story of Johnny “Tarzan of the Apes” Weissmuller.

Or at least a version of that story. Plamondon never lets the reader forget that this book is a construct. A long chapter that ostensibly describes Rivages’s biography moves seamlessly from a series of perfectly plausible factoids to an accumulation of increasingly ridiculous ones, and eventually the sheer number of permutations of his “career” end up making the whole quite unbelievable. After a quick dip into the Wikipedia entry for Johnny Weissmuller, it seems the Weissmuller of Plamondon’s novel may be a somewhat fictionalized one as well, although the basic trajectory of his life remains the same.

Hungary-Hollywood Express is an experimental novel. It presents a kind of life-puzzle, and it is up to the reader to put together a picture of the discontented Rivages and his compulsion to write. “When I have concerns, when I become obsessed, when my life turns damp and drizzly, I pick up a pen and it replaces thoughts of suicide.” Finally, the void at the centre of the book is the void at the centre of each of us, our existential hunger for meaning.