A review of Hysteric by Nelly Arcan

In 2001, Nelly Arcan published Putain (Whore, in its English translation), a book whose frank depiction of sexuality and sex work propelled its author into the literary spotlight. In 2009, Arcan committed suicide at her home in Montreal.

In between, she wrote Folle, a novel whose protagonist, also named Nelly Arcan, is a writer who at age fifteen made a pact with herself to commit suicide at the age of thirty. The novel depicts the narrator’s thirtieth year and the brief but intense relationship that shaped it. Folle has been translated into English for the first time as Hysteric, bringing a work of one of Quebec’s most original and courageous authors to an English audience. For the sake of clarity I’ll call the author Arcan and the book’s protagonist Nelly, though if the roles happen to blur, it’s probably not for the worst – Hysteric deliberately muddies the waters of narrative. The line between fiction and memoir is generally a sacred one, and readers are frequently cautioned not to mistake story for truth, or vice versa. Arcan blows up this narrative convention, challenging us to get caught in the slippery grey area between the real and the invented. What is memory, anyway, but a kind of story we tell ourselves; a story in which we star as the protagonist? Still, it’s unnerving to read lines like, “My girlfriends were great fans of fashion magazines; when they saw I was happy they let down their guard, for them love couldn’t coexist with the desire to die.” 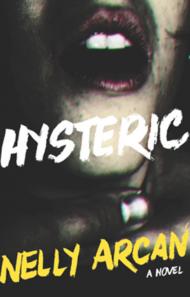 In ancient Greek medical theory, the uterus was conceived of as “an animal within and animal,” a being with its own desires that could wander at will inside the body. Without regular sex to anchor it in place, it could end up on a woman’s brain, resulting in a condition termed hysteria. This was only the beginning of the fascinating and sordid history of attempts to identify and treat women’s “unmanageable” emotional nature. There’s something very apt about this history in relation to Hysteric; Arcan takes her place among the pantheon of women who write books about obsessive,  pathological relationships; relationships where feelings spill over, metastasize, and well up in the wrong places. Like Djuna Barnes (Nightwood) and Chris Kraus (I Love Dick), Arcan’s interest in love and sex is mainly about shame, abjection, and ultimately the loss or destruction of the self, rather than love’s (or sex’s) potential to redeem and uplift. In that sense, Hysteric is kind of the anti-50 Shades of Grey. Instead of discovering herself through sex and its power dynamics, Nelly disappears.
Her gaze is relentless and unflinching, but Arcan’s prose is not sloppy or sensationalistic

Arcan approaches her subjects with the rigour of ritual. In her hands, hysteria takes the form not of a woman screaming uncontrollably in a fit or spasm but a woman returning again and again to the same subjects, circling them, ordering and disordering – a kind of OCD hysteria. Nelly sifts through the past year’s events, a series of subjects (or objects) taking on talismanic weight under the stress of her obsession: her aunt’s tarot cards, her lover’s roster of brunette ex-girlfriends, her abortion, her sex work, and a Polaroid photo of herself from her first porn shoot when she was twenty. Her gaze is relentless and unflinching, but Arcan’s prose is not sloppy or sensationalistic. Fans of Chris Kraus in particular will appreciate Arcan’s detached but exacting style, translated with masterful understatement by David Homel and Jacob Homel. She writes from a place that is both deeply embodied and highly intellectual – if someone’s womb really did end up on their brain, and that person then wrote a book, it might read something like Hysteric. English readers are lucky to have access to more of Arcan’s brains and guts, and this translation is hopefully a herald of growing appreciation for a uniquely talented and brutally brave writer. mRb